v Faces in KS: Trey Sides - Sports in Kansas 
Warning: include(../includes/bodytag.php): failed to open stream: No such file or directory in /home/kansass/public_html/ks/news/index.php on line 36 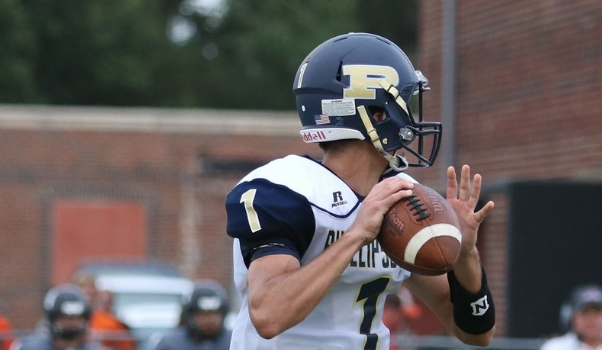 It seems like Phillipsburg High School senior multiple sport athlete Trey Sides has been in high school forever. That’s probably because we’ve been hearing about him for four football seasons as he helped lead the Panthers to their first ever 2-1A state football title in 2015 as a freshman in high school three years ago.

That seems ages ago, even if it was just three short years ago but now Sides is a senior and one of the top small school multiple sport athletes in the entire state of Kansas.

Last season Sides was the 3A Sports in Kansas Basketball Player of the Year after leading his team to a state runner-up finish. Sides is a three-time all MCL pick in basketball and looking for a fourth in his senior season in 2018-2019. He’s also in his fourth year as the starting quarterback for the Panthers football team, the current 2A number one team in the state. Sides is also a first team all-state golfer in 3A as his team took second last spring and was part of two relays that placed at the state track and field meet, earning all-state honors in track and field. There is no off-season for the 6-foot-1, 160-pound, senior.

Sports run big in the Sides family. His cousin Riley, a senior at nearby Northern Valley, was the Sports in Kansas 1A-II Basketball Player of the Year last season as a junior after leading the Huskies to the 1A-II state title. Their dads are twin brothers. Keith Sides is Trey’s father, while Kevin Sides is Riley’s father. Both were all-state players for Northern Valley loaded squads in the early 1990’s. Northern Valley would win state titles back to back under the Sides twins in 1990 and 1991. Keith is the current head basketball coach at Phillipsburg.

While Trey is busy all year playing all the sports, he plans to play basketball at the next level. He has seen interest at all levels of colleges and will look to lead his team on another deep run in 2019. Last year as the 3A runner-up the Panthers went 23-2.

“Currently I am seeing interest in basketball from several JUCO's, NAIA's, and a few D2 and D1 teams. My plans are to continue my basketball career, and I am still on the bubble with my major. “ Sides said.

Phillipsburg was considered a state basketball contender when the year started, even though Sides, then a three-year starter at quarterback that was a starter on the state title team as a freshman, was out due to a thumb injury suffered lastt fall. Sides returned after Christmas to a team that had a 5-1 record – and significantly improved the Panther offense. Phillipsburg went 23-2 and didn’t lose until the state title game when it fell 44-43 to Halstead in the final seconds. It marked the team’s first trip to state in 45 years. Sides helped his dad win his 200th career game this year. Overall, Sides led the team with 12.4 points, 4.9 rebounds, 3.7 steals and 2.9 assists a game. Without Sides, Phillipsburg averaged .82 points per possession, shot 43 percent on 2-pointers, and averaged 12 free throw attempts a contest. With Sides, the Panthers had .97 points a possession, shot 49 percent on 2s and averaged 18 free throw attempts a contest. Sides has 913 points in his career entering this season.

Younger brother Ty Sides is also a part of the Panther sports teams with his older brother. He had a nice freshman campaign last year in which he averaged over five points per game. He also threw for two touchdowns and ran for two more last fall when Trey was limited due to injury.

Sides is also an outstanding student at Phillipsburg High. He is a perfect 4.0 GPA student and his favorite subjects are math and psychology.

For now, the focus is only football for Sides and helping his team get to another state title. Phillipsburg football, led by head coach J.B. Covington, is 37-4 while Sides’ senior class has been in high school after going 11-1 last season. They are off to a 3-0 mark so far in 2A this season and dominated their rival Smith Center, 42-14, last week. Phillipsburg went 11-2 in 2015 while winning the 2-1A state championship over Troy, 30-29. In 2016, the Panthers would go 11-1, only losing to eventual 3A state runner-up Hesston, 38-26. Phillipsburg has been so good in the loaded MCL that they haven’t lost a league contest in three seasons, that coming Sides freshman year where they lost to Norton, 7-6.

Phillipsburg also features Treylan Gross this season, who is looking like one of the top backs in 2A so far. They also have a very legit weapon in the kicking game if they need it in senior Johnathan Hunnacutt. But it all starts up front for Phillipsburg a team that really shines in the running game. The Panthers are unselfish and get it done with a total team effort.

“Starts up front with Jared Shelton, Kasen Keeten, Noah VanKooten, Tyce Jerby, Parke Dibble, Johnny Boeve, and Brock Buresh. Backs/Recievers are Charon Ellis, Nathan Moon, Treylan Gross, Jacob Sisson, Ty Sides, Austin Miler, and Kagan Keeten. However, everyone on this team has and knows their role and we understand that it takes everyone to be successful.” Sides said.

Phillipsburg will be back in action this Friday as they take on MCL rival Norton on the road. We caught up with the senior student athlete below in the latest Q&A edition of Faces in Kansas.

This feature is presented by Ultimate Image Photography, proudly supporting the Phillipsburg Panthers. Give us a call at 785-533-6510.

Chet Kuplen, Founder/CEO of Sports in Kansas, on Sides

“As we stated above it seems like this kid is never going to graduate and has been around forever. That’s a good thing for Phillipsburg as he has been an impact in all sports that he plays. He has a very high sports IQ and makes his team better. Even if he’s not dominating in the football stat column, he knows his offense and keeps it rolling. In basketball, he is a complete game changer for his team and a complete player. He is a very unselfish player, but can score, is an elite defender and distributes the basketball very well. He is the glue of the team. To be honest, until we featured him I didn’t even know about him in golf and track. Really not much he doesn’t do and add in a 4.0 GPA. Pretty cool last year when his cousin, Riley, along with him, received the most votes in their classification to each get player of the year honors. Looking for another big year for the Sides family!”

I started playing organized football in 4th grade, and have been playing it every year since.

Our goal is to continue to get better every single practice, improve every Friday night, and then ultimately win a state title in November.

We feel like we have a great shot this year to make a deep run, however our mindset is to take one game at a time and continue to improve every week and the rest will take care of its self.

I feel my athleticism and football IQ are what stands out as a player. Being a quarterback I’m able to keep plays alive that put our team in a good situation to score. I feel I can read the defense very well, and find weaknesses in the defense our offense can exploit.

Philipsburg is such a supportive community when it comes to Panther sports, especially on Friday nights. Our student section is always loud, and many communiy members look forward to our home games.

Phillipsburg football plays with a lot of energy and physicality. Coming to a game you will definitely see that, guys fly around on all 3 phases (offense, defense, special teams), and we have fun playing the game.

Starts up front with Jaret Shelton, Kasen Keeten, Noah VanKooten, Tyce Jerby, Parke Dibble, Johnny Boeve, and Brock Buresh. Backs/Recievers are Charon Ellis, Nathan Moon, Treylan Gross, Jacob Sisson, Ty Sides, Austin Miler, and Kagan Keeten. However, everyone on this team has and knows their role and we understand that it takes everyone to be successful.

The brotherhood and relationships created with your teammates. Football demands a lot from you and to go through that with 50 other guys makes it all worth it.

I play basketball, golf, and run track. I am a point guard on our basketball team which finished 3A state runner-ups last year. I was a part of our golf team that also placed second in 3A a year ago, and in track I ran two relays that placed at state this past year.

It’s a joy to be playing for our coaching staff, some days we have our ups and downs, but at the end of the day they treat us like their own sons. Coach Covington, Coach Buresh, Coach Fiscus, and Coach Jacobs demand a lot from us, but they believe in us so much, they know the work will play off.

A lot of our guys utilized the weight room this summer. We had practices once a week, and 7-on-7 every  week as well.

Currently I am seeing interest in basketball from several JUCO's, NAIA's, and a few D2 and D1 teams. My plans are to continue my basketball career, and I am still on the bubble with my major.

Hang out with my family and friends.

In 10 years I’m hoping to be succeeding in the field of study I choose, and hopefully settled down in a small town enjoying life.

My favorite subjects in school are math and psychology, and I am a 4.0 student.

My role model is definitely my parents, both have taught me that nothing comes easy and it takes a lot of work to be successful. Both have been extremely supportive in everything I do, and I’m blessed to have them as my parents.

I can play the guitar.