v Faces in KS: Kyler Semrad - Sports in Kansas 
Warning: include(../includes/bodytag.php): failed to open stream: No such file or directory in /home/kansass/public_html/ks/news/index.php on line 36 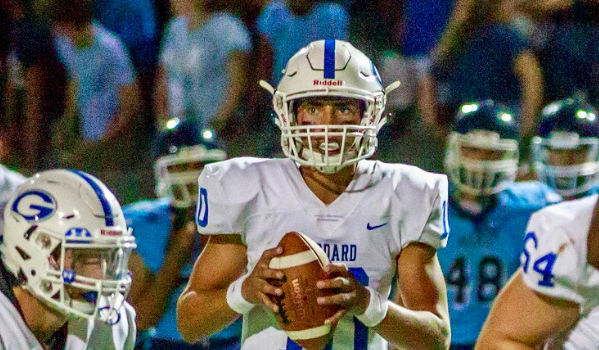 In this week’s Sports in Kansas underclassmen edition of Faces in Kansas, we go to Goddard, Kansas. As just a 14-year old freshman last fall,Kyler Semrad of Goddard High School, got called upon to step in for senior all-state quarterback Blake Sullivan after Sullivan had an injury. Sullivan was one of the state’s best football players that helped Goddard to a runner-up finish in 5A the year before. Semrad would shine in the limited playing time as a replacment and starter in a couple of games and see an impressive 486 passing yards with nine touchdowns.It’s not often a freshman in high school has any opportunity to see the field let alone at the quarterback position, while producing.

Fast forward to a year later and Semrad is now the starting quarterback and one of the top signal callers among sophomores in the state of Kansas. The 6-0 175-pounder has big shoes to fill as the Goddard quarterback but getting his feet wet a year ago may serve as a big advantage for the Lions in 2018.

“Last year I had a great opportunity to learn from the senior class and those guys really helped me succeed. I never thought I would be playing any varsity going into last year.” Semrad said.

Semrad has stepped in nicely as the full-time starter in 2018. In week one he threw for 245 yards with two touchdowns in the 32-8 win over Wichita East and had another touchdown pass in last weeks blowout win over Arkansas City. While Semrad hasn’t gotten to see a full-game yet or the top-notch competition part of the schedule yet, he has opened with a nice sophomore campaign and has goals of taking this team on a deep run in 4A. Goddard moved down a class this year and could be one of those highlighted teams to look at on the West 4A playoff bracket later on in the season, after making the 5A semifinals in each of the last two seasons.

“I think our team can make a run. We play some really competitive teams in the regular season that will really help us when we get into the playoffs. We are young and have a lot of new guys on both sides of the ball. 4A will be a bit different but I think we have a good chance.” Semrad said.

Semrad is also a model student at Goddard High School with a perfect 4.0 GPA where his favorite subject is history. He would eventually like to play college football and go into orthopedics or sports medicine.

Goddard lost a ton of key talent last year including Sullivan and two-time all-state lineman A.J. Vang. The Lions do bring back some key talent as they feature linebacker Kam’Ron Gonzalez, linebacker Dhimani Butler, running back Ben Bannister and tight end Blake Mitchell. All are key players that return as starters as just five returned on the offense and three on the defense from last year.

Goddard is 2-0 this season under first year head coach Tommy Beason, an assistant the last six years for Scott Vang who rebuilt this program to a team that went 22-2 over the last two seasons. Vang has moved on to be athletic director at El Dorado High School. The Lions will be back in action this week as they take on Andover Central at home before a rivalry matchup next week against Eisenhower. We caught up with the outstanding sophomore below in the latest Q&A edition of Faces in Kansas below.

This feature is presented by Goddard Ace Hardware. Proud to support Goddard High School football and Kyler Semrad. Find us on Facebook here.

My goals this season is for us to go undefeated and win a state championship. I would like to keep improving my game to better our team and to work on my vocal leadership.

What is it like being an immediate impact player at such a young age, what is your age?

Last year I had a great opportunity to learn from the senior class, and those guys really helped me succeed. I never would have thought I would be playing any varsity at all going into the year.  Our offensive coaches, Coach Beason and Coach Rehse, taught me a lot and really helped me progress as a Freshman playing on Friday nights.  You get all of this publicity because of what you’re doing at such a young age, but you can’t let it get to your head and stay focused. Right now I’m 15 and I’ll be 16 next April.

I think our team can make a run this year. We play some really competitive teams in the regular season so that will help us as we get into the playoffs. We have several new guys and young guys on both sides of the ball but I think we can all grow as the season progresses. Being in 4A will be different but I think we have a good chance.

What makes me such a force as  a player is my ability to be a student of the game. I love watching film to prepare myself for a game. Knowing all coverages and fronts is a key point at my position. My accuracy is a big one but making the right reads is more important. You can be the most accurate passer in the world but if you don’t make the right reads then you won’t succeed.

Growing up I was the kid who would sit by himself and watch the games when all of the other kids were running around playing. Playing for the Lions was my dream. Our student section is one of the best in the state, they bring so much school spirit and support wherever we play. Our fans, cheerleaders, and band are amazing with what they do every week. They all make home games pretty special.

They should come watch us because of our defense, they bring electrifying physicality and energy every game. We are an exciting offense that gets  the ball to a lot of playmakers.  To feel the atmosphere of a Friday night, it’s an awesome feeling to be apart of.

Everyone on our team plays a huge role, our offensive line, tailbacks, and receivers. Our defense is lights out and keeps us in every game. Our special teams do a fantastic job with everything they do. We all work together as a unit very well.

My favorite thing about football is how it brings all the teammates together. It creates a brotherhood and you’ll have that for the rest of your life. Not many sports can do that. All of the community comes together on game days to support our team.

I play baseball for my high school and on a summer club team, so during the summer I’m traveling all the time. I play a utility infielder and baseball keeps me involved in the school an busy in the summer.  But most importantly it  lets me spend time with my friends while competing at a high level.

Playing for Coach Beason is awesome. Him and I have a good relationship where we can share ideas and and talk about a game plan.   He believes in his players, just like last year during my first start as a Freshman, I threw two picks on back to back possessions. He stuck with the game plan and it ended up working out. His play calling is a little unconventional and we all love it.  Coach Beason is one we would all run through a brick wall for.

Our team worked very hard in the weight room all through the summer and on the field. We got better at all of the 7 on 7’s and Pitt State camp. Our guys stayed dedicated all summer long to get ready for this season. We became closer as brothers through all of our team building events and activities. This summer I worked to improve my mechanics, velocity, and knowledge of the game with my quarterback coach Joe McCulley. I also work on my speed and strength with my speed coach Brian Butler.

I am talking to some small NAIA and Division III schools. I plan on continuing to play college football at the highest level.

I see myself continuing my career in football or pursuing a career in orthopedics and sports medicine field.

My favorite subject is any kind of history, I am a good visual learner, and I have a 4.0 GPA

My granddad is my role model. He grew up on a farm in Western Kansas, and worked hard all throughout his childhood. He earned his college degree then returned home to run the family dairy farm then had a very successful career in the medical field. He still works hard at everything he does to this day even though he’s retired. He has taught me to work my hardest at everything in life and to stay dedicated, and to be a man of God. The greatest thing he has ever taught me is how to be a great man.

I am a huge fan of country music, especially older country like Hank Williams Jr, Johnny Cash, and Chris LeDoux.

I’d like to thank God, my family, coaches, and everyone who’s helped me get to where I am. Thank you to Sports in Kansas for giving me this opportunity.