v Sports in Kansas: Football Games to Watch - Week Two - Sports in Kansas 
Warning: include(../includes/bodytag.php): failed to open stream: No such file or directory in /home/kansass/public_html/ks/news/index.php on line 36 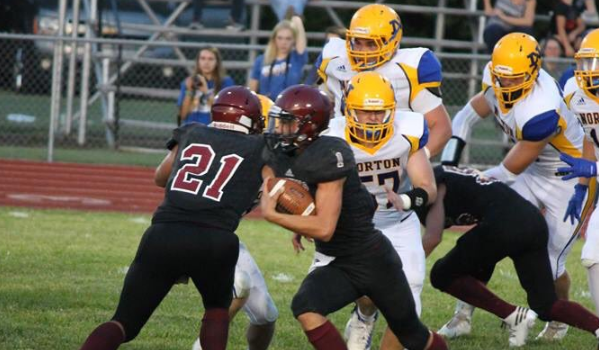 Sean Boston of Sports in Kansas looks at games to Watch for Week 2. Of course there's several good ones to watch but we highlight one game per classification that you won't want to miss on Friday night.

The Indians and Trojans both opened up the 2018 season with big wins, and both by the same score. Manhattan defeated Olathe NW, 42-7 and Topeka defeated Shawnee Heights by the same score. The Indians got a big rushing attack from senior Kevontae McDonald and junior Isiah Childs. McDonald rushed for 126 yards on 19 carries and two touchdowns, while Childs also rushed for two scores on 10 carries for 72 yards and also had a receiving touchdown. The Indians will rely on their defense a lot here in Friday’s match up, especially with the potent offense that Topeka High will bring in. The Trojans are led by junior stars, Ky Thomas and Da’Vonshai Harden. Both put on a show last Friday in the 35-point victory. Thomas rushed for 160 yards on 20 carries and three scores, while Harden managed to pass for 104 yards and rushed for two scores. It’ll come down to which defense steps up on Friday night, as both of these teams have powerful offenses. This will be an intriguing Centennial League contest under the lights in The Little Apple on Friday, as the Indians will go for their third straight win in the series.

Bishop Carroll and Wichita Heights always seem to be up towards the top in the Wichita City League standings, but this game will be a little different when the ball is kicked off on Friday night. The Golden Eagles, the defending state champs in class 5A will have a loss on their overall record after a heartbreaking loss to Wichita NW in week 1 on a last-second field goal by the Grizzlies. Bishop Carroll hasn’t lost back-to-back games since the 2002 season, so the Golden Eagles will do everything they can to not let that happen on Friday night. The Falcons on the other hand come in after a 35-21 win over Maize South. The Golden Eagles are still trying to find their identity after losing a lot from last year’s state championship team, but teams sporting “Bishop Carroll” across their chest always seem to find a way to get things done. This will be a big one to keep an eye on, not only in 5A, but in the City League standings, as well. K’Vonte Baker may be the most underrated player in the state and had 275 rushing yards last week at the quarterback position for Heights. He is a human highlight-reel.

Three years ago when Zane Aguilar took over the Wellington football program, the team went 0-9, last season they went 5-5 and this year, they’re off to a 1-0 start after a 32-0 win over Wichita Collegiate. Remember when Collegiate used to be a state powerhouse? The Crusaders dominated last Friday night in all phases of the game. Michael Ledbetter threw for 217 yards on just 6-8 passing and two touchdowns. DeAndre Washington had a big night with four catches for 175 yards and two scores. The Crusaders offense put up 321 yards of total offense in the week 1 win. The Indians on the other hand are a usual power in 4A, but will be down in 3A this season. They’ll enter week 2 after a 42-14 win over Mulvane. Andale has won the last six meetings against the Crusaders, but will this be the year that the Crusaders will give the Indians a run for their money? If Wellington’s offense continues the success they had last week and can get some timely stops against a very dangerous Andale offense, then we may see a closer game than many expect when they see these two teams playing each other.

Both Holcomb and Scott City have been two of the most dominant programs in western Kansas over the past 5-10 years. Holcomb has won two of the last three titles in 4A-II, now called the new 3A with the addition of 16 3A schools with 32 4A-II schools. They’ll renew their rivalry in the Great West Activities Conference on Friday night in Holcomb. The Beavers of Scott City have won 7 of the last 10 meetings between the two teams. They’ve met four on the gridiron over the past two seasons, one game apiece in the regular season and one game apiece in the postseason. Scott City won the regular season tilt last season, but the Longhorns prevailed in the playoffs when it truly mattered. Holcomb took down Goodland, 34-12 a week ago, but it took some time for the Longhorns’ offense to get going. The Longhorns are a young team,but will grow in experience as the season goes on. Scott City shutout Hugoton, 35-0 on the road last Friday and will have their hands full on Friday night with another road test. Peyton Ortner looked great in his first start as the Holcomb quarterback. Wyatt Hayes is one of the top multiple sport athletes and had over 200-yards rushing last week. Hayes, an all-state defensive end last year, is also a state champion 800-meter runner and a state wrestling champion. Scott Community also features Marshall Faurot at receiver and defensive back, one of the rising decathlete recruits in the United States.

Three words sum up this great rivalry between Rossville and Silver Lake, “War on 24.” The series that goes back to 1935, which includes 92 meetings all-time, according to Kansas High School Football History. The classic rivalry games between these two are maybe the most known of any other rivalries in the state, as it has been either Silver Lake or Rossville playing for a 3A state title it seems like every season. Many of these meetings between the two have came in the playoffs, or in district play, so they mean more than just any other Friday night. Silver Lake has won 6 of the last 10 meetings, but Rossville always finds a way to make it close. Although the teams aren’t as powerful as they have been, the two head coaches know a thing or two about winning. C.J. Hamilton has been with the Eagles since 1979 and is the winningest active coach in the state, while the Bulldawgs are coached by Derick Hammes who took over in 2013. Rossville had to battle past Centralia last Friday and were led by Garrett Carver’s three rushing touchdowns and 195 yards on the ground. Silver Lake took down St. Mary’s, 46-7 and got contributions from everyone on the offensive side. Hamilton and Silver Lake will have the upper hand in this week’s game, but don’t count the Bulldawgs out in their home opener.

Phillipsburg has won the last six meetings against the Cardinals, including a 41-0 shutout last fall, but Plainville is eager to end that streak on Friday night. Phillipsburg blew out Ellis, 52-12 in week 1 and have now won 22 consecutive regular season contests. Cha’Ron Ellis, Conlee Hugunin and Treylan Gross all rushed for two touchdowns apiece in last week’s victory. The Panthers are a deep team and will be dangerous in class 2A, as they’re one of the favorites to go far in the postseason after such a successful run in 3A over the past few seasons. Plainville beat Norton, 31-24 in their season opener last Friday at home. Junior QB Jordan Finnesy passed for 178 yards and three scores, while also returning an interception for a score. Cody Crawford was his top receiving target, catching three touchdown passes and hauling in 175 yards through the air. The Cardinals are going to have to play error-free football if they want to win on the road Friday night. Phillipsburg will be the favorite, but don’t be shocked if the Cardinals make some noise.

Another exciting game will kick off under the lights in Claflin on Friday night and it’ll feature two of the state’s best in the 8-Man ranks. Central Plains, who defeated Ness City, 30-14 last Friday night will play their home opener against the Knights of Victoria, who won 28-14 over Otis-Bison in a ranked match up. Both teams come in off of good wins in week 1, but only one will move out of week 2 with a perfect record. Cooper Windholz rushed for two touchdowns and passed for another for the Knights in their win. Victoria’s defense also stepped up big in the contest, intercepting an Otis-Bison pass three times in the final quarter to seal the win. Myles Menges is one of the top quarterbacks in 8-man and had two touchdowns last week.

Friday, 7 PM at in Hoxie

Maybe the most exciting game in all of Kansas on Friday night will take place in northwest Kansas in the small town of Hoxie. The Indians will host Osborne in a very intriguing 8-Man game. The Bulldogs will make the 97 mile trip west along Highway 24 to battle the Indians under the lights in front of a packed crowd. Osborne enters week 2 after putting up a basketball game score in week 1, winning 88-76 over Hill City. Osborne QB Darrell Holloway rushed for 356 yards on 24 carries and seven touchdowns. The junior also completed 7-10 passes for 94 yards and a score. The Bulldogs had 762 yards of total offense in the game, most of which were accounted by Holloway. Hoxie, on the other hand beat Tribune-Greeley Co., 44-18 in their week 1 game. Quarterback Jared Kennedy completed 6-12 passes for 112 yards and one touchdown, while also rushing for 129 yards on 13 carries and four scores. Running back Wylie Weems also had a big day on the ground, rushing for 111 yards on 19 carries and one touchdown. The scoreboard in Hoxie will see a lot of points put up on it Friday night, so buckle up. The meeting will be the first between the two since 2011.