v What impressed us after week one of 2018 fball season? - Sports in Kansas 
Warning: include(../includes/bodytag.php): failed to open stream: No such file or directory in /home/kansass/public_html/ks/news/index.php on line 36

What impressed us after week one of 2018 fball season? 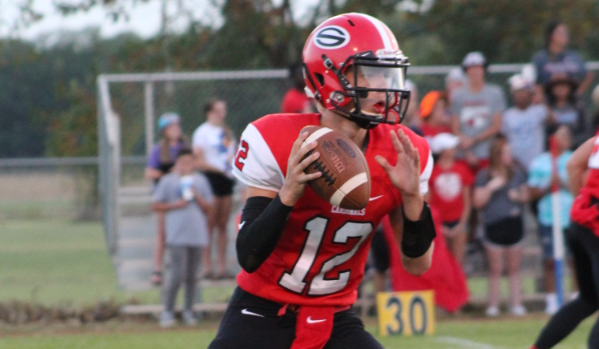 We highlight some impressive performances across the state class-by-class after week one of the 2018 football season. This update is presented by Nex-Tech Wireless, American Implement, Craw-Kan Telephone, Rainbow Commications, Rack Performance, Labette Bank & Eddy's Toyota of Wichita

Gardner Edgerton and its new coach

Gardner-Edgerton went 0-9 last season. Were on a 10-game losing streak entering tonight. Tonight they upset 6A power SM East, 28-23, under first year HC Ryan Cornelsen. It's GE's first win in the Sunflower League since coming over from the EKL. What a way to open up the SFL!

West dominated Hutchinson 55-14 in their first meeting in seven years. The last time the Pioneers played the Salthawks it was the other way around losing 62-13 back in the Randy Dreiling days of Hutchinson. West could be one of those hidden teams to make a little noise this year after finishing 5-4 last season, two of those losses coming to Wichita Northwest and 5A champion Carroll.

Tyler Kahmann of Campus, on the 25 WR to Watch list and a non-senior WR at Sports in Kansas last fall, huge night for the Colts: 4 Total TDs, 3 Rec TDs, 1 Fumble TD in blowout win over Dodge City to open the year.

Moshier, who had a ton of success at Meade and a state title in 2012, ended a 21-game losing streak on Thursday night as North High defeated rival Wichita South, 29-22. It was the first win since 2015 when they beat Wichita East.

Derby hammered Garden City 49-6 to open up the 2018 campaign after a runner-up finish a year ago. The Panthers showed they are back again and ready to compete. The defense limited Garden City to just 103 yards. Tre Washington had three touchdowns in his first game as the starting running back. The consitency of the program is so impressive as it seems every year they are hit heavy by graduation and reload, why head coach Brandon Clark is one of the best in Kansas.

Sophomore Carson Arndt kicked a 20-yard field goal with seconds remaining to give the Grizzlies a thrilling 23-22 win over last years 5A champion Carroll.

Salina Central, who was once a state power, was on an 18-game losing streak entering tonight's game against Eisenhower. The Mustangs dominated Eisenhower 44-7 to get their first victory since 10/30/15. Great win for 1st year HC Mark Sandbo.

Maybe the most exciting player in the state who had to miss the beginning of last season, Baker had over 200 rushing yards in the game, including over 200 in the second half, on a defense that has been considered one of the better defenses in the state over the last several seasons. Baker is going to be very hard to stop this year and may be one of the most underrated players in Kansas.

Young a sophomore had a breakout game with 256 yards rushing on Friday night in the win over rival Blue Valley. With a loaded backfield that also features Cameron Jackson, carries may be split up but this could be the year that Young absolutely explodes, he’s off on the right foot. When Aquinas offense is clicking it’s hard to stop.

Wellington football on the rise?

Zane Aguilar, a former all-state player at Wellington, became HC at Wellington in 2016. That year he went 0-9. Last year he went 5-5 and the Crusaders just opened up with a 32-0 shutout of Wichita Collegiate. Looking like Aguilar has the program going in the right direction. First time to ever beat Wichita Collegiate. DeAndre Washington had four catches for 175 yards with touchdowns of 83 and 80 yards in the win.

Cobbins exploded for 202 yards and three touchdowns as Miege beat last years 6A champion Blue Valley North, 33-21, on Thursday night in Overland Park. Cobbins, who could have easily had 2,000 yards last year, may be that back this year as he takes on more of a feature role in the offense. Production has been spread out at Miege due to the star power all over the field. Daniel Jackson was injured in week one and it’s unknown to us his status of the rest of the season. We do know one thing, Sam Pedrotti stepped in nicely at the quarterback position. Phillipe Wesley will be a major playmaker, Cobbins is Cobbins, and Dylan Downing is back to lead a swarming defense.  Cobbins, who is often an overlooked player by recruiters because of size, could emerge as a major prospect this season. He is visiting Nebraska on Saturday. Major sleeper.

Hit by graduation last year with a loaded cast of talent you thought maybe a step back on their very good defense and just not the case. McPherson swarmed Salina South for a 21-0 shutout on Friday by holding the Cougars under 100 yards of total offense. Also big nights offensively for Jace Kinnamon who went over 100 yards as did Kyler Hoppes through the air.

The Dragons defense, led by Jerek Butcher, Dylan Jordan and Joel Kafka, swarmed the Grizzlies and their Division I quarterback with a 43-8 opening win in 2018. The Dragons have to be one of those teams in the discussion to make a run in 4A this season. Of course the standard is Bishop Miege, but Pittsburg has to be one of those other teams in the convo on the 4A East. Pittsburg held LCHS to just 35 yards of offense at the half.

The Spring Hill kicker kicked a 47-yard field goal against Louisburg on the road on Friday. We saw a lot of great range on Friday night across the Sunflower State with a long of 54 so far, unless someone went longer?

Pratt became the first team to shutout a Hoisington team under Zach Baird. Jamie Cruce and the Greenbacks opened up the 2018 season in dominating fashion with a 34-0 win on the road at Elton Brown Stadium. No surprise as Pratt all-stater Travis Theis went for 12 carries, 204 yards and four touchdowns, according to Cole Reif.

Roth was big on Friday with 12 carries for 201 yards and four touchdowns over Hillsboro. With Cameron Cox out with an apparent knee injury expect Roth to be the primary show. The fourth-year starter is one of the best in Kansas at any level.

Starting in his first game as a varsity quarterback, where there is going to be some rust on a school hit heavily by graduation off a title team a year ago, Ortner stepped in nicely as he had three rushing touchdowns to lead the Longhorns to a 34-12 victory over Goodland on Friday night. Coach Teeters defense limited his old school, Goodland, to just 36-yards rushing in the game. The Longhorns got it done on the ground with 244 yards on 35 attempts. Ortner will look to improve upon a couple of mistakes with INTS but other than that you can ask for much more as a first year starting quarterback replacing the 4A-II OPOY in Trey Gilbert. Holcomb and Scott City meet next week which will be a much larger test for the Longhorns.

Parsons HS first year HC Kurt Freiss, a native of Parsons, after his first win for the Vikings in a 49-14 win over Iola tonight. Parsons had just two wins combined in 2016 & 2017. Parsons hadn’t won a season opener since 2011 when they beat Columbus. With several speed guys (4A 4x100 2nd-all on team, 4th place 4A-II basketball, 3rd 4A-II baseball) they have a shot to win some games. Lost to Iola 28-25 in '17. DaQuan Johnson is one of the most exciting athletes in the state and he had touchdowns on offense, defense and special teams on Friday night, including a interception return of over 100 yards.

On our 25 QB’s to Watch this year after seeing him at a camp this summer it’s no surprise he opened up with a big night with 270 yards rushing and five touchdowns for the Irish in their 34-18 victory over Marysville, last years 3A runner-up. This kid could generate some Division I interest this season at 6’5” and 185-pounds.

The Bluejays, who won the 3A title in 2017, lost just one game last year and that was to Nemaha Central. Now Nemaha in the new 2A and Sabetha in the new 3A, the Bluejays dominated from start to finish with a 33-7 victory. Nemaha had won nine regular season games in a row against the Bluejays, however Sabetha did have one playoff win four years ago against NC. Gabe Garber, Mason Engleken, and Joe Gruber will be a three-headed monster in the backfield while Elliott Strahm and company lead the way on the offensive line.

The Tigers beat Oskaloosa 46-0 on Friday night to get break a 19-game losing streak. ACCHS is led by head coach Corey Thomas

Garden Plain scores touchdown with 45 seconds in 4th qtr to defeat Cheney tonight, 15-12, in the Central Plains League. Last year Garden Plain won this game 18-13 when they were both in same 3A district. With new classes Cheney in 3A, Garden Plain is 2A.

The senior had 195 yards rushing with three touchdowns to give the Dawgs a 26-14 win against Centralia at John Riggins Field. After taking a step back last year after graduation, maybe this is the year Rossville can make a little noise after winning 3A state titles in 2014, 2015, and 2016. Rossville now in the new 2A, along with their War on 24 rival, Silver Lake.

Big night for Kasen McKee of Pleasanton. Four touchdowns and two interceptions as the Bluejays beat Northeast-Arma, 42-14. Pleasanton now in 1A after playing 8M-I last season.

Crawford had five receptions for 175 yards and three touchdowns in the week one over Plainville. Jordan Finnesy and Crawford could be a combination to look for in 1A this season under head coach Grant Stephenson.

In their first ever game in the 8-man ranks the Indians clocked St. John in the third quarter, 60-14, under head coach Josh Ybarra. Garrett Burden led the way with 18 of 25 passing for 302 yards with seven touchdowns. Fellow senior Dakota Bayliff had 10 catches for 212 yards and four touchdowns. There was a point in time this was a 3A program and now moves into the 8-man program. This has to be a program you have to keep an eye on this year!

Oswego played Chetopa tonight for the 1st time in football in 30 yrs. The two schools are nine miles apart. Now both in 8-man, the "Bloody Bucket" was in full control by Oswego with a 54-14 victory. Congrats to HC Matt Fowler, formerly Spearville, on his first win at Oswego

Greenwood went off for 243 rushing yards, 45 receiving, 18 passing with five total touchdowns for the three-time defending semifinalist in 8M-I under head coach Jeff Slater as they won 58-8 over Southern Coffey County.

Darnell Holloway, Osborne. 88-76 are you kidding me?

Osborne won 88-76 on Friday night over nearby Hill City in a game that saw 356 rushing yards by Darnell Holloway with 7 rushing touchdowns. He also passed for nearly 100 more and a TD. Holloway, one of the sleeper prospects and featured earlier this season at Faces in Kansas, is the player to watch in the 8-man ranks this year. He’s the real deal and he also has a younger brother on the rise that is a state champion hurdler in Darrien Holloway. With the Holloways and Cade Miller the Bulldogs have a shot to score a lot of points this year under first year head coach Brandon Wise.

As Ashland won their inaugural 6-man football game last night, 52-0, over Natoma, Cody Lohrding had a special birthday as he had four touchdowns, two in the air, one on the ground and a pick six on Friday night.