v Faces in KS: Koy Brack - Sports in Kansas 
Warning: include(../includes/bodytag.php): failed to open stream: No such file or directory in /home/kansass/public_html/ks/news/index.php on line 36 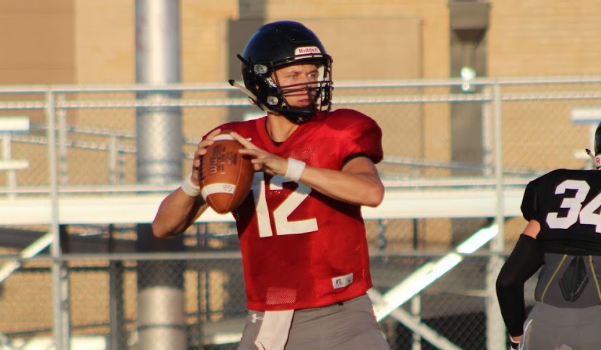 The 6-foot-2, 180-pound, signal caller, had 1,049 passing yards with six touchdowns along with 890 rushing yards and 15 touchdowns. He’s a true dual-threat that is a very versatile athlete. In fact, as a sophomore in 2016, he was an all-conference wide receiver for Panther Top 11 quarterback Jacob Murray.

Now it’s Brack’s turn to shine after a first team All-WAC selection one year ago for head coach Erin Beck. The Panthers have quite the cast returning with six back on offense and 10 on the defense. The defense is led by junior defensive back Dalton Miller, an All-5A pick one season ago.

“I think we have a great shot to make a run this year. My goal is to do whatever I can to make the team better. My teammates and I just have to take it one game at a time.” Brack said.

Not only does Brack get it done on the football field with a lot of high expectations this season, he’s also a baseball player. Brack was an All-WAC selection last season at catcher, also earning 5A honorable mention honors.

Sports run in the family as his dad has been an assistant coach at Great Bend for 19 years and his brother, Jayce, was an all-state shot put thrower at Great Bend, before a career at Kansas State.

Brack, who currently has zero offers at the collegiate level, also checks out academically. He features a 3.7 GPA and plans to major in Sports Turf Management in College.

For now he is looking to lead his Panthers to a week one win against Andover after finishing 5-4, one season ago. It will be a highlighted matchup of quarterbacks as Brack will take on Andover sophomore Eli Fahnestock who threw for over 1,700 yards as a freshman in high school last fall.

We caught up with the player to watch in 5A this season in the latest Q&A edition of Faces in Kansas.

Chet Kuplen, CEO/Founder of Sports in Kansas, on Brack

"Obviously I have watched a lot of film on a lot of guys and he stands out to me. I think we have a few WAC guys that do some special things at the QB position for 2018 season. I got an opportunity to see him in practice for about 20 minutes a few week ago and was impressed how he ran for his size. He's a true dual threat and there's a lot you can do with him. If he had to play WR for another program or for GB I think he would be an All-5A caliber as well. He has a shot to be one of the best quarterbacks in 5A this season. He's not the fastest guy in the world but man he makes 6'2" 180 look pretty fast in pads. GB has a shot to be legit this year, especially with 10 starters back on the defense. On another note, very impressed with their facilities and love getting to come on weekly to talk about the area with Cole Reif on radio. Also apologies because for his first two years as a starter in 2016 and 2017 I called him Brack (rhyming with black) when it's really pronounced Brock. Hey... you learn something every day."

I got involved in football at a very young age due to my dad being an assistant football coach at GBHS for the past nineteen years.  I can remember going and helping out at practice starting when I was in kindergarten.

My goal for this season is to do whatever it takes to help my team be successful. I also want myself and my teammates to take the season one game at a time and improve every week.

I think we have a great shot to make a run this year. Last year was definitely a learning experience after going 5-4 and having three heartbreaking losses. I think we have a lot of guys with great experience coming back and that should help us once playoff time gets here.

I think being around high school football for as long as I have makes me a force as a player. Also, my teammates make me a force because, I couldn’t be the player that I am without them.

Friday nights in Great Bend during football season are hard to beat the energy from the fans and student section really set the atmosphere for the night. The best feeling is running out of the tunnel and looking at the stands and seeing your entire community supporting you.

Every player on our team has an extremely important role that helps make us better.

My favorite thing about football is, seeing the support from the school and community and how it brings everyone together.

Yes, I also play Baseball, and I use to play basketball.

This summer we attended the Fort Hays State team camp where we got a lot of good reps, and saw some really good competition.

Right now I have zero offers. In college I plan on Majoring in Sports Turf management.

When I am not playing sports I enjoy hunting and fishing. I also like spending time with friends and family.

In 10 years I plan on being a golf course superintendent or working a job in the sports turf industry.

I have a 3.7 GPA and my favorite subject in school is Social Studies.

Growing up I really liked watching some of the college quarterbacks especially Collin Klein. I am also thankful for my coaches including my dad for pushing me to do my best on and off the field.

Bookies, the have really good burgers. My mom’s chicken strips are pretty solid too!!

I have a brother that went to K-State to throw shotput.

Thank you to Sports in Kansas for selecting me for Faces in Kansas.