v Faces in KS: Tyler Stottle - Sports in Kansas 
Warning: include(../includes/bodytag.php): failed to open stream: No such file or directory in /home/kansass/public_html/ks/news/index.php on line 36

Tyler Stottle is back for his senior year for the Lancers of SM East. 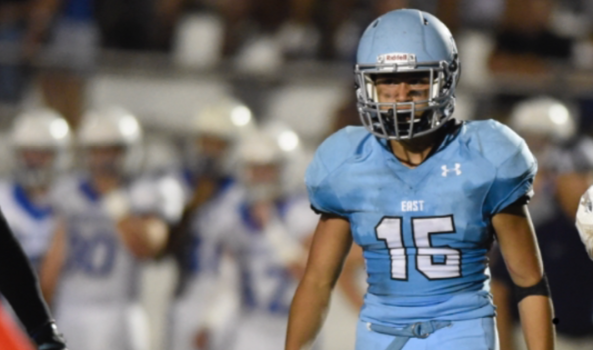 Tyler Stottle is an athletic and physical linebacker that is primed for a big senior season for the Shawnee Mission East Lancers.

He is also very versatile and can play multiple spots whether that is inside linebacker or safety. He also features a 35.6” inch vertical and has great quickness. While he may be one of the smaller linebackers in the state last season he has packed on some muscle in the off-season and stands 6-foot-1 and 185-pounds. He’s also a very physical player. In fact, he quit soccer because he was being penalized too much for being too physical and asked his father if he could just focus on football. The move seemed to be perfect fit.

Stottle had a huge junior season in which he earned 1st Team All-Sunflower League honors and 1st Team All Non-Senior All-State Honors from Sports in Kansas, honoring the top players in the state that are freshman, sophomores or juniors in the state. He registered 81 tackles one year ago for the Lancers. While he may not be a major recruit, currently holding zero offers, that doesn’t take away the fact that he is one of the best returning linebackers in the state.

Stottle is also on the varsity lacrosse team, a sport that has become very popular over the years in the Kansas City market and not really known to the rest of the state. Rugby is also quite the popular sport at some KC high schools as well. Just as we talked about Sam Thomas being a rare swimmer and linebacker, who was featured yesterday from Andover Central, we have another one. Stottle swims on a club swim team in the summer and also played basketball last year.

Stottle has had three football coaches over the last nine months, not something that is common for a program that has become a power in 6A football. It has been a bit hard to follow what is going on at SM East in the coaching ranks if you’ve followed high school football over the last eight or nine months.

The Lancers are now led by first year head coach Justin Hoover, who was scheduled to be the offensive coordinator for 2018, but took on the head role once Fred Bouchard announced on August 6th that he was taking a different role in Illinois. Bouchard was a multiple-time state championship coach in Missouri before taking the East job, where he never got to coach in a game. Brouchard was hired after Dustin Delaney, last year’s head coach that led the Lancers to a 6A state title in 2014, left to take a job in Colorado at the end of last years season. He has recently resigned after winning his first game in Colorado this past Friday night.

Regardless of what has went on in the off-season with coaching, Justin Hoover is primed to take over an East program after spending the last several seasons as the offensive coordinator at state power Bishop Miege, a team that has went 50-2 over the last four seasons with four state titles. Hoover also is known for developing high level quarterbacks including Drew Locke at Missouri and Graham Mertz at BV North through his Spin It QB Academy.

“I can tell you that he has the leadership, football IQ, and energy needed to be one of the top coaches in the state and this this team to a championship. The team has 100% bought into Coach Hoover. We’re the underdogs at this point, but I like that. We’ll get noticed by the end of the season.” Stottle said.

While Hoover and company will handle the offense, Stottle returns to lead a defense along with all-state defensive end P.J. Spencer who is seeing Division I interest. They are two of the seven starters that return for the Lancer defense in 2018. Just four starters return on offense including quarterback Andy Maddox.

We caught up with the outstanding senior linebacker below in the latest Q&A edition of Faces in Kansas.

Special thanks to Foo's Fabulous Cafe' for being a loyal supporter of the Lancer Booster Club and Lancer Gridiron Football. Head to Foo's to "Plan, Celebrate, and Enjoy Life."
--
Q&A w/ Stottle

I’ve loved the game since I was little and have been playing tackle football since I was in 2nd grade. I was playing soccer but was always getting penalties for being too physical. So, I asked my dad if I could just play football.

My main goal is to help lead my team to a State Championship. I hope to stay healthy, have a great season, and get some offers to play at the next level. I’d love to play for KU or K-State.

I am aggressive and fly to the ball. I am fast and physical. My biggest strength is my ability to read and react. I put myself in position to make a play. I am quick; can get into the backfield in a hurry and control the field from sideline to sideline. I ran a 4.16 Shuttle at the 810 Sports Combine. Or, I can drop back in coverage if I read pass. I came up with three picks last season at linebacker. I hope to build on that this year. I’m not one of those 150 tackle per season guys. My defense doesn’t stay on the field long enough for that to happen. We like to punch the other team in the nose and get off the field. I only play about 2 ½ quarters per game.

What’s the atmosphere like to play on a friday night for your school and town?

My community is all about football. Under the Friday Night Lights our student section brings the biggest and loudest crowds in the state week in and week out. Shawnee Mission East fans are the best around and our team couldn’t be more thankful for their support.

For someone who hasn’t seen one of your games, why come to one?

This year I believe we have the most talented group of Senior athletes in the state who all have been working their tails off since going undefeated as a Freshman team. Some of the other teams may have a handful of kids with D1 offers. We are talented from bottom to top. We are very experienced and know that every single game matters. So, every week our goal is complete domination and we show no mercy.

Who are the other key players on your team?

Like I was saying, we are strong and deep. Andy Maddox QB, PJ Spencer DE, Ashton Jenkins NG, Deonte Carroll WR/S, Parker Willis K/P, Noah Steele TE, and Michael Perry WR will all be names people recognize by the end of the season. Tony Friends, our Junior Running Back is also going to have a big season.

I played JV basketball last year and will play Varsity lacrosse this year as well as swim team over the summer.

Our new coach over the last couple of weeks is Justin Hoover and in those few weeks I can tell that he has the leadership, football IQ, and energy needed to be one of the top coaches in the state and lead this team to a championship. The team has 100% bought into Coach Hoover. We’re the underdogs at this point. But, I like that. We’ll get noticed by the end of the season.

Our summer weights and conditioning this year was very rigorous. We attended a team camp at Northwest Missouri State that gave us an opportunity to work on our new offense and get some game speed experience for some of our new guys. That camp also gave us the chance to match up against teams from Missouri that we won’t see during the season. There were a lot of good teams at the camp. In my opinion, SME and Park Hill were the two best teams at that camp.  A good amount of guys on the team have also been attending skills camps throughout the summer to get better.

We also had the opportunity to scrimmage Miege this summer. That was lots of fun because they are a great team and we won’t get the chance to face them. I think most of their guys will tell you we are underrated. That camp also gave us a chance to work on some new stuff on defense. Passing quarterbacks are not going to be able to just sit back in the pocket and get comfortable. If they do, they are going to get to know me on a personal basis. I think I got to the QB 5 or 6 times in our scrimmage against Miege.

What interests are you seeing at the college level and what are your plans?

I participated in college football camps at Kansas, twice at K-State, Northwest Missouri State, Western Missouri, and Emporia State. I also attended FBU camp in Kansas City. I played as a safety for most of the camps. I had the chance to work with 2-time Super Bowl Champ Darryl Pollard at FBU. That was an awesome experience. Occasionally a coach would want me at linebacker. I will play wherever they need me at the next level.

Hang out with friends and go to the pool.

Oklahoma Joe's or Chick-fil-A. Of course, Foo’s has the best frozen custard. Back in the day we’d always head straight to Foo’s after football practice.

I grew up playing football in the Blue Valley League. So, I’ve lined up against kids from the EKL quite a bit. I hope to see some of them in the post season. Also, I have a 35.6 inch vertical jump which is 5th all time at Shawnee Mission East.