v Faces in KS: Hunter Koch - Sports in Kansas 
Warning: include(../includes/bodytag.php): failed to open stream: No such file or directory in /home/kansass/public_html/ks/news/index.php on line 36

Hunter Koch had over 1,000 yards recieving and 20 TDs for Axtell. (photo: Amy Heinen) 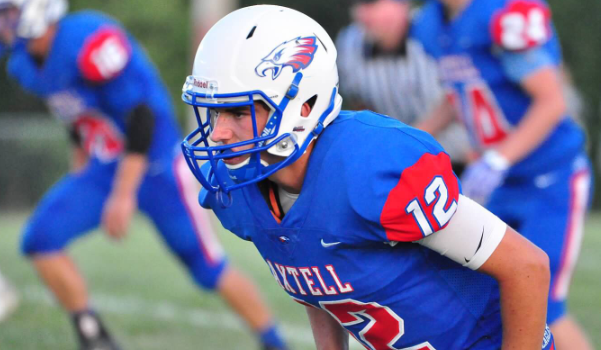 Hunter Koch returns for his senior year at 8-Man Division II Axtell after having a huge year at receiver in 2017.

The 5-foot-10, 170-pounder had 1,056 yards receiving on 71 catches last year with 20 receiving touchdowns. He had 24 total touchdowns on the year in 10 games. Only three players in the state had over 1,000 yards receiving that return for 2018, one of those being Koch. The other two are Daniel Jackson at Bishop Miege and Logan Talley at Mill Valley, both 11-man players in 4A and 5A.

Koch also had 49 tackles on defense as a cornerback and 433 kick return yards and 138 punt return yards. Three of those kickoff returns went for touchdowns in 2017. Koch also had 559 yards receiving as a sophomore in 2017.

Koch’s 30 career touchdown receptions are 27 away from Layne Bieberle’s 8-man state record of 57 in a career from 2012-to-2014. With a monster year, Koch could compete with that, however that would have to be one of the best 8-man years in history. If he repeats his year from last year he would be right at 50 in his career, but with a few extra playoff games you never know. The single season touchdown record for touchdown receptions in 8-man is 29 by Kellye Irvin of McCraken in 1979.

Expect a big year for Koch as his quarterback Quinn Buessing returns at the position after throwing for 1,788 yards and 27 touchdowns/7 interceptions as a sophomore last fall.

The Eagles open up the 2018 campaign against Beloit-St. Johns Tipon on Friday. We caught up with the senior receiver below in the latest Q&A edition of Faces in Kansas.

This feature is presented by H&R Construction, proud to support the Axtell Eagles and Hunter Koch!

When I was younger I’d go watch my cousins games and most of the time I ended up playing on the sidelines and every since then I have loved it.  What are your goals this season?My goals this season is to have another big year and help lead my team to state.

We have a pretty good chance of making a big run this year we return most starters a lot which have a lot of experience. Hopefully a good chance to make it to state.

The atmosphere is just incredible we live in a small community which most people in the town come and support us and it’s just a great feeling.

Well we play eight man which it’s a pretty fast paced game. We like to pass he ball quite a bit so it’s pretty intense.  Who are other key players on your team? Our middle linebacker Nate Buessing, our Qb Quinn Buessing.

Just being able to compete every game, practice and scrimmage.

I play Baseball, Basketball, and track. Our baseball team this year got 2nd in our tournament. Our past two years of basketball we have went to state and lost first round. Track I have improved over the years, made it to state my freshman year and hopefully can have a trip to state this year.

It’s a great opportunity to be able to play for my coach. He makes us better every day and he loves the game just as much as we do. He’s a great coach and I like how he has pushed me and my teammates over the years.

We lifted weights all summer plus we did football stuff until we couldn’t, then we did plyos. We had our team camp, and also did a 5 on 5 tournament down in Solomon, Ks. Where we got second.

Looking to hopefully get a scholarship and being able to play at the next level and don’t have any set plans on a career yet.

I like to hunt or fish when I’m not playing sports.

Favorite subject would be Math. And a 3.5 gpa

The best place to eat around here would be the Summerfield Bar. They’ve got some great loaded nachos!