v Faces in KS: Sam Thomas - Sports in Kansas 
Warning: include(../includes/bodytag.php): failed to open stream: No such file or directory in /home/kansass/public_html/ks/news/index.php on line 36 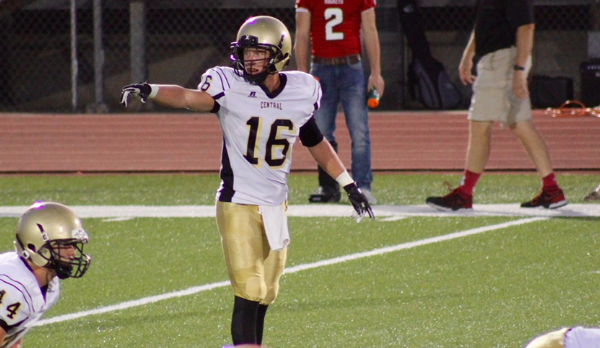 Sam Thomas returns for his senior season at Andover Central as a third-year starter at linebacker after register over 100 tackles last fall as a junior.

One of the more underrated linebackers in the Wichita market, he had 112 tackles one year ago on his way to earning 4A-I all-state honorable mention honors for the Jaguars. He also racked up 63 tackles as a sophomore in just six games. He averages over 10 games a tackle as a starter.

Thomas, who is 6-foot-2, 190-pounds, can play inside or outside backer, he also loves contact. Something we noticed on his film was that he has the ability to put his hand in the ground if needed and has great angles to the football. While he may need to put on some weight and more strength in the weight room, he is one of the more versatile linebackers in the state for 2019. Thomas can really run as well, featuring speed in the 4.6 HH range.

Thomas is also a rare combination of swimmer/linebacker. He nearly qualified for state last year in the 100-yard breaststroke, missing it by .3 seconds. He was also two inches short of going to state in the triple jump. No matter what the season is Thomas is competing.

“I am a very competitive athlete no matter what sport I am doing. I want to win.” Thomas said.

Thomas will look to get Andover Central on a little bit of a run this year after a 5-5 finish one year ago under head coach Tom Audley. The Jaguars have had some recent success taking state runner up back in 2015 in 4A-I. AC opens up with the short road trip to Augusta on Friday. The Jaguars return four starters on offense and six on defense.

This feature is presented by Bombardier Learjet, proud to support Sam Thomas and the Andover Central Jaguars.

I started playing tackle football when I was in 3rd grade and have loved the sport ever since.

I want to win the state championship and make 1st team all-state and the Shrine Bowl.

I think we have a shot if our whole team comes together as one.

I’m a very competitive player and I love to win

The atmosphere is absolutely perfect in Andover Ks. It still feels like a small town because the whole town embraces the Friday nights.

I know our defense this year is going to be the fastest defense in Kansas. So I think it would pretty cool to see the best defense in the state.

Jake Taylor: Cornerback- Jake is a very athletic player, he can make plays, and he has the speed.

Patrick Skinner: Offensive line/Defensive line- Patrick is a 3 year starter and probably the strongest guy I know. He can bulrush his way through anything and has a passion for hitting people as hard as he can.

I’m a big fan of gamedays, I love the pregame meals, and I love the feeling I get before kickoff.

I do swim and track. Swim- this past year I was .3 seconds short of making state in the 100 yd breaststroke. Track- I was 2 inches from going to state in the triple jump.

I think it’s cool to play for Coach Audley because everybody that I grew up watching played for him.

Our defense loaded our playbook and now we have a lot more formations and that makes teams have to take out of there time at practice, and they’ll be confused with what we throw at them.

I plan on going to K-State unless I get an offer that can change my mind.

I love to go to the lake in the summer, hangout with friends

I see myself working in Kansas City.