v Faces in KS: Billy Bartlett - Sports in Kansas 
Warning: include(../includes/bodytag.php): failed to open stream: No such file or directory in /home/kansass/public_html/ks/news/index.php on line 36

Billy Bartlett of 5A BV Southwest is back for his senior year. (Mike Sorbin) 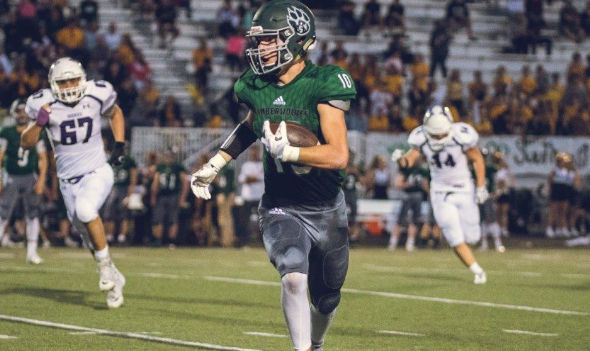 Billy Bartlett almost quit football his sophomore year of high school two years ago. It's a good thing he didnt as he has been one of the top receivers in the state’s best league (EKL) over the last two football seasons at Blue Valley Southwest High School.

He has registered over 1,400 yards seasons since his sophomore year including 974 yards and 11 touchdowns on 72 receptions in just nine games a season ago as a junior. He earned Sports in Kansas Non-Senior honors for his 2017 season. Bartlett is also a part of the loaded Blue Valley Southwest baseball team that is churning out Division I talent and will have opportunities at the next level in either football or baseball.

He now returns for his senior year but it will have to be without Will Eldridge, a 1st Team Sports in Kansas Non-Senior QB as a junior last fall. Eldridge was injured last season and won’t play this year due to division one opportunities in baseball.

“Will Eldridge is a huge part of the reason for my success as a receiver. I wouldn’t have all the stats or awards if it weren’t for him being such a great friend and QB. We will miss him this year with him being hurt and pursuing baseball.” Bartlett said.

The Timberwolves also lost 5A Defensive Player of the Year Nick Allen to Kansas State but Bartlett feels good about the program that is building at BVSW under Anthony Orrick. They will look to Tanner urry to be the quarterback this season as a sophomore. Also expect Jake Lamfers to be a impact player at linebacker and running back.

“We have been building a program that we are fairly a new school. WE believe we can win a good amount of games this year with our core group of guys and possibly make a run.” Bartlett said.

Bartlett returns with five starters offensively and six starters defensively on a squad that went 3-6 in the states best league. You may look and think 3-6, not good. Well, not so fast. The six losses were to St. James, Mill Valley, Blue Valley, Aquinas, Blue Valley North and to Bonner Springs in the playoffs. Five of those six losses are to teams that are all considered state title contenders for 2018.

Blue Valley Southwest opens up the 2018 campaign at home against Lansing. We caught up with the outstanding student athlete who features a 3.96 GPA below in the latest Q&A edition of Faces in Kansas.

When I was going into first grade my friends convinced me to play flag football and then tackle the following year. They told me football would be more fun than soccer so I decided I’d give it a shot.

My goals individually are to have 1200 rec yards and 15 TDs. Also to make 1st Team All-EKL for the second year and be a Sports in Kansas 1st Team All-State selection. As a team we set our goals to improve our record to .500 or better this year.

We have been building a program given we are a fairly new school. We believe we can win a good amount of games this year with our core group of guys and possibly make a run.

My confidence combined with my athleticism and play making ability. Also the guys around me make it easier for me to compete.

When you play your first varsity football game it gets you hooked. The roar of the crowd when you enter the stadium each week is incredible!  Each time we score it gets even louder, which in turn motivates the team even more! The atmosphere gets taken up a notch when we play our rival BV West and the stands are packed on both sides.

We love to go fast and get the ball out to our playmakers in space and let them do their thing. On defense we love to fly around and be physical.

We have a solid group of guys which makes it hard to choose a few, that being said, Kyle Murphy is a big time Center and a great leader, Tanner Curry is filling Will Eldridge’s shoes as a sophomore QB and we expect great things from him, Jake Lamfers is a beast on both sides of the ball at Linebacker and RB. Tommy Zimmerman is a name that will be recognized after this year, he is a big boy at TE and DE and insane athleticism. Austin Murrow was a great addition for us last year but will most likely will be out this season due to injury.

The bond you create with the guy next to you. You will never get that in any other sport. My sophomore year I came in as a first year receiver and varsity player, I was accepted and respected by the seniors and I had a bond created that will never be broken with those guys. It’s what you live for in the game of football.

I play baseball as well, I was Honorable Mention All-EKL in our 2018 season and was apart of the varsity in the 2017 season as well. We are a great baseball program with back to back regional championships. We are looking to win it all this year with a great senior class and some younger guys who will get their shot.

He is a great coach and an even better person. He listens to his players and loves each of them and has a love for the game like no other.

What did you and the team do in the off-season to become better this summer?

We take about 2 months off throughout the year. After winter break we get after it with running routes and working on timing with our QBs. Then after spring break we hit it hard with full team workouts. It really shows character when it isn’t “football season” but we have our entire program showup to a workout before school at 6:30. Over the summer we lifted heavy 3 days a week and did speed and agility at 6:30 AM with an exception of a off week in the middle of the summer. We went to a bunch of camps like Pitt State Team Camp.

I would love to play football or baseball at the next level and am doing as much as I can to get that offer and find the school that I think fits best.

I love to play video games, I can play them all day long if I could. Also playing basketball or just hanging out with my friends.

I see myself working a job in a field that I love, everyone has the dream of playing pro sports and if that is a possibility then obviously I have to go with playing sports.

My role model is my dad. He had nothing when he grew up and has showed me what it is like to work hard for what you want. Also my brother is a big role model as well because he drives me to be better than I am. He also was a Honorable Mention All-EKL RB his senior year and his success has driven me to be better at the game we love.

I almost quit football before my sophomore year but my brother convinced me to play.

Will Eldridge is a huge part of the reason for my success as a receiver. I wouldn’t have the individual awards/stats I do if it weren’t for him being such a great friend and QB. We will miss him this year with him being hurt and pursuing baseball.