v Faces in KS: Refujio Chairez - Sports in Kansas 
Warning: include(../includes/bodytag.php): failed to open stream: No such file or directory in /home/kansass/public_html/ks/news/index.php on line 36 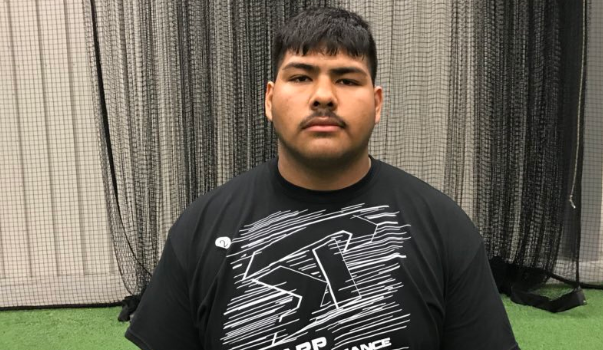 Garden City High School junior, Refujio Chairez, is one of the strongest players in the state of Kansas.

The 6’1” 305-pound lineman is a weight room freak. He benched 365-pounds entering his sophomore year but where he really went viral was on the Sports in Kansas social media networks this summer was his 675-pound squat. Not only is Chairez big and strong, he’s also one of the top junior lineman in the state of Kansas returning for the 2018 season.

Chairez earned first team Sports in Kansas Non-Senior on the offensive line last season, honoring the top players in the state by position that aren’t seniors. He was also an All-WAC pick on the offensive line. It’s also not common for a sophomore in the state to be as dominating as Chairez was one year ago, but a big thanks to him living in a weight room has allowed that.

The 2020 recruit could project at a guard at the next level or nose guard as he enters his third season of high school football as a third year starter.. He also moves very well for a 305-pound kid. He has a 40 in the 5.2 range. Chairez dominated every snap from start to finish one year ago. He also had the opportunity to go against one of the best in Kansas every down last year in DeMarcus Elliott, last years Sports in Kansas 6A Defensive Player of the Year. Elliott had a Kansas State offer but ultimately chose to go to Garden City Community College.

Now it’s Chairez turn to be one of the best in Kansas as he will look to lead a team that returns three starters on offense and four starters on defense. GC returns Ryan Jarmer at linebacker, Carlos Acosta at defensive back, and Kaleb LaPointe at safety. Garden City also added a big-time transfer in Reece Morss, a first team Non-Senior at Linebacker last fall from Sports in Kansas for last years 4A-II champ Holcomb.

Garden City, led by head coach Brian Hill, finished the 2017 with an 8-3 record. They open up the 2018 season next Friday against 6A state power Derby, last years 6A runner-up. Derby has three out of the last five 6A state titles. The Buffaloes should be one of the favorites to win the WAC this year. We caught up with the junior to watch in the latest Q&A edition of Faces in Kansas.

My goal is to help everyone around be better and beat our rivals, win our conference and win a state championship. In that order.

I believe we have a shot every year because of how prepared everyone is going to be. Including coaches.

I am persistent to always be the best on the field and dominate every snap until the lights turn off.

It’s indescribable by words. It’s an incredible atmosphere, the loud semis passing by honking like maniacs, our amazing marching, and our incredible supporters who lose their voice for their Buffaloes.

Because we all play lights out. And our atmosphere is the best in the state.

Ryan Jarmer our linebacker, Carlos Acosta who had the most interceptions in 6A, Kaleb Lapointe, and Reese Morss our RB

The lifelong brotherhood and memories

Yes, I wrestle and placed 5th place last year. But I’m looking to make a run for gold this year as well as a Team Gold. I also throw discus and shot put.

He makes me want to be the best I can be, on and off the field. He cares so much about you as a human being rather than just an athlete. There’s no one like him

We worked our tails off all summer in weight training.we tried to focus on health by eating right and conditioning as well.

Mostly smaller schools and my plan is to find the right program that I can play a role in and make the program better.

Eating with all my teammates and bonding and also spending time with my family.

I see myself being a successful person in society and giving back to the community here in my hometown.

My favorite subject is algebra and I’m a type of student who likes to have fun with teachers and I’m always interacting with them.

My role model is my dad because he showed me hard work and right from wrong. And never to give up, no matter how low it gets for me.

The first sport I ever played was soccer. I was the best goalkeeper around!

I’m extremely thankful that I get the opportunity to do this to promote myself and my community in a positive way. And I’m blessed to play the sport and I will always give it my full effort.