v Faces in KS: Matt Campbell - Sports in Kansas 
Warning: include(../includes/bodytag.php): failed to open stream: No such file or directory in /home/kansass/public_html/ks/news/index.php on line 36

Matt Campbell is ready for a huge senior year for Fort Scott. (courtesy photos of Campbell) 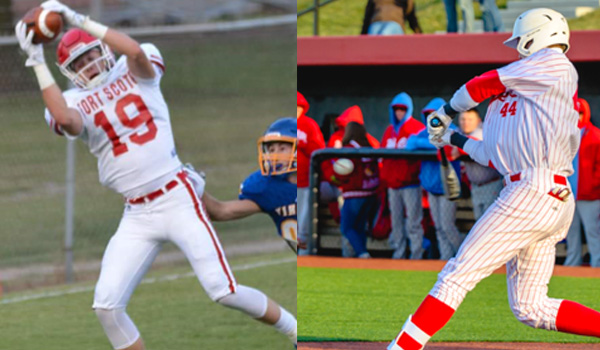 Matt Campbell, senior multiple sport athlete at Fort Scott High School, has grown up around sports his entire life. His father, Bob Campbell, is one of the most respected high school football coaches in Kansas over the last 20 plus years, winning state titles in 4A at Fort Scott in 1996 and 2000, both undefeated.

“Ever since I can remember I’ve been watching or playing sports.” Campbell said.

Not only has Matt been playing sports, he has put himself on the map as an athlete over the last school year. He is one of the top baseball players returning in the state of Kansas for the 2019 season after hitting .561 with 28 RBI for the Tigers in 2018, earning Sports in Kansas 4A-I all-state honors at first base. But it doesn’t end at baseball.

Now with football season starting, he is entering his first season as the starting quarterback for his father in 2018. He spent last season as one of the top receivers in the SEK League, earning all-league honors after registering over 500 receiving yards. The transition should go smoothly with Campbell knowing the offense about as good as anyone could know an offense.

"Football is special at Fort Scott with all the fans and playing with my teammates but it makes it even more special getting to experience it with my dad." Campbell said.

Campbell should be one of the top multiple sport athletes in 4A this season. He has the size at 6-foot-5 and 210-pounds that recruiters look for in football and the swing that could land himself an opportunity to play some major college baseball. He could see Division I interest in both this season.

Fort Scott knows how to produce baseball talent, it currently has two players playing at the Division I level in Mason Knopp (Neosho County/Southeastern Louisiana) and Kaleb Delatorre (Neosho County/South Alabama). While the Tigers may be known for their state titles in football and basketball over time, baseball has also become quite the sport in Fort Scott. A lot of that could be the interest created from following the career of Fort Scott alum Adam LaRoche in the MLB. LaRoche is now an assistant for the baseball program at Fort Scott under head coach Josh Regan. The Tigers have one of, if not the nicest field in the state, with field turf, called the LaRoche Baseball Complex/Dave Regan Field. It resembles that of a minor league stadium off of Highway 69 just south of the town.

And it’s not all about sports for Campbell either. He boasts a perfect 4.0 in the classroom and plays saxophone in the band. He has big shoes to fill as he lists his older sister Mallory, now in the Marine Corps, as his role model

“She attended the Naval Academy and is now in the Marine Corps. She is an extremely hard worker. She has been very supportive of me and has always made me very proud.” Campbell said.

For now, its all about experiencing one last season of football with his father as the Tigers will look to replace all-state players Andrew Callahan and Zarek Fewell from a 8-3 campaign in 2017. FS returns four on offense and seven on defense for 2018. We caught up with the outstanding senior student athlete below in the latest Q&A edition of Faces in Kansas.

Thanks to Performance Spine and Sport, offering full body cryotherapy in Pittsburg, for powering updates with the SEK League in 2018

Chet Kuplen, Founder/CEO of Sports in Kansas, on Campbell

"The last I remember was Matt not being a very big kid a couple years ago and now all of the sudden he's a guy I have on my radar as a prospect in football and baseball with great size. Not only that, he seems like a great kid from what everyone has to say about him. He has the ideal size to play football but I really like him in baseball, especially with his swing and size at first base. He hit well over .500 last year and will have the opportunity to be one of the best first baseman in the state this year at any level. The sky could be the limit for him because he hasn't always been this 6'5" 210-pound kid. I am really interested to see him at QB after seeing him as a WR/TE type last year where he did very well with over 500 yards. Hoping for a big year for him in football for him and his dad. Really enjoy talking to Coach Campbell at events and on radio, he's a true class act."

Both of my parents played collegiate athletics and have been coaches. So ever since I can remember I’ve been watching or playing sports.

Our goals every year are to win a League Title, Regional Title, and compete for a State Title.

Do you guys have a shot to make a run this year in any sports?

In all three sports we’ve lost some key players from last years team but we also have guys returning who helped contribute last year. I think we have a chance to improve on our success from last season.

What makes you such a force as a multiple sport athlete?

In all three sports I always try to focus on the one that’s in season and I try to be as mentally and physically prepared as possible.

What’s the atmosphere like to play football on Friday night for your school and town and for your dad?

There’s nothing like the feeling of a Friday night on the field. Football means so much to so many players and fans that it’s a lot of fun getting to suit up and represent Fort Scott. It also adds that I get to experience it all with my dad. It’s really special.

The atmosphere at a Fort Scott game is really awesome. We’re really lucky that we have fans who are passionate about Tiger football.

Who are other key players on your teams this year?

We have so many guys who will contribute from seniors all the way down to underclassmen.

I have been around football my whole life and I love it. It’s always meant so much to me and that has made me enjoy all of the emotion and preparation that comes with it. For baseball, the one on one competition you get every at bat is different from other sports. Also, I enjoy the small, mental things that end up making a difference in the game and all the strategy involved.

I also play basketball. I really enjoy being around the team and coaches as well as staying competitive during the winter.

Coach Regan is a lot of fun to be around but he also coaches us hard to get better every day. I’ve been very fortunate to have coaches like him and others who teach us about how to act off the court or field as much as on it.

A lot of us were in the weight room and either on the field throwing routes or guys would be in the cages getting extra hitting in.

I’ve seen interest from several MIAA schools and a couple FCS schools for football. For baseball, I have had some Kansas jucos show interest.

I really like playing golf and fishing in my spare time.

I plan to have a college degree and working to be successful in my chosen profession.

My big sister Mallory is my role model. She attended the Naval Academy and is now in the Marine Corps. She is an extremely hard worker. She has been very supportive of me and has always made me very proud.

I’ve been in band and played the saxophone since 5th grade.