v Faces in KS: Brison Cobbins - Sports in Kansas 
Warning: include(../includes/bodytag.php): failed to open stream: No such file or directory in /home/kansass/public_html/ks/news/index.php on line 36

Brison Cobbins is a 2020 on the rise. (photo: Courtesy of Bishop Miege Football, Kenneth Daniels) 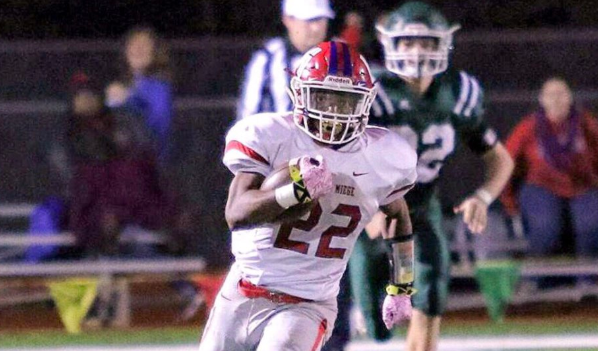 Brison Cobbins is one of the most underrated players in the state of Kansas. Is it because of size or limited number of carries due to blowouts? Maybe it has to do with both and the fact that the best is yet to come for the Bishop Miege junior running back.

The 5-foot-8, 172-pounder, plays much bigger than he looks. He also has the speed and strength to play at the next level with two years of high school football remaining. He has 4.44 speed in the 40, squats 445 pounds and benches 275. He also gets it done in the classroom with a 3.7 GPA. He still awaits his first FBS offer.

While his numbers check out, where he really shines is on Friday night. Cobbins has 2,135 rushing yards in his first two years of high school football. Sounds pretty good right? Well it’s very good but it’s even more impressive because he’s done that on on just 202 carries. Cobbins averages 10.6 yards per carry as a running back for the Stags over the last two 4A-I state title teams. There were some games that he didn’t even play in the second half due to blowouts. As a sophomore last fall he had 1,294 yards on 119 carries with 15 touchdowns. He’s also got 237 receiving yards in his career, averaging 11.9 yards per catch, with two touchdowns. And it’s not like he just started as a freshman because nobody else was available to play, he started as a freshman for a team that has been the best in Kansas, regardless of classification, over the last five football seasons.

Cobbins is also a major threat in the return game if needed and could play receiver if he wasn’t one of the best running backs in Kansas. There’s a lot he can figure into at the next level.

As anyone knows it’s not a one-man show at Miege and never has been. The Stags produce top notch talent that has went on to major college football year after year and even some to a shot in the NFL. It’s no different this year as seven starters return on offense and eight return on defense, including all-state all-class Sports in Kansas Non-Senior Defensive Player of the Year, Dylan Downing, at linebacker.

A lot of the hype last year, as it should, went to Daniel Jackson, who was a a sophomore wideout that has multiple Division I offers. And obviously the most hype to Carter Putz, a graduated senior record breaking quarterback, now a freshman baseball player at Notre Dame after having one of the best high school football careers in Kansas history. There were stars all over the field at Bishop Miege last year, whether its Jackson, Cobbins, Putz, Downing, or Jack Burns, a graduated senior now at Cornell. Before that it was Jafar Armstrong, Colin Grunhard, Dawson Downing and Ryan Willis, all playing for Division I programs currently. And even before that it was Montel Cozart, Justin McCay, Trevor Releford, Max & Neal Shortell and Shane Ray, now in the NFL.

Miege, led by head coach Jon Holmes, will be going for their fifth consecutive state title. The Stags play in 4A and in the best league in Kansas, the Eastern Kansas League (EKL). We caught up with the sleeper 2020 prospect below in the latest Q&A edition of Faces in Kansas.

Chet Kuplen, Managing Partner/Founder of Sports in Kansas, on Cobbins

"For some reason we've had recruiters sleep on some of the Miege players and I've noticed that with the Downing's and the Cox kid last year. I don't know if that's because they have so much talent that some kids numbers dont shine or what, or simply a Kansas thing. He will be an offer kid, it's just a matter of time before it happens. He literally just turned 16 about 30 days ago. That's why we do what we do to help kids out and to promote them. Someone, somewhere will be reading this and take a look. This kid doesn't have D1 college size by the eye test, but who cares he does everything else to make up for it on the football field. He's fast and very strong for his size. He is the real deal and if he played for any other team that didn't have a 2,500-3,000 yard passer, he could easily have 2k yards in each of the last two seasons. Coach Holmes does an oustanding job of spreading it out with all of the talent that he has and not only that to get all of these prospects to play together as a team is even more impressive. I've seen some teams with a lot of prospects or star players that don't win, simply because they dont play as a team and are out there for themselves to get offers, not the case with the Stags. They get offers and they win. I don't know if they'll dominate a 6A champion or run through the EKL like they did last year or if this is the year Aquinas can finally beat them, but I do know one thing, I wouldn't bet against Miege. They are loaded and seem to have so much more speed than everyone else. Brison will be one of the best players in Kansas. If you don't know his name now you will by the end of the 2018 season."

-I got involved in football during first grade, where I started of playing flag football competitively

-My goals are to become a better leader, to rush for 2,000 yards, have 20 TD’s, to receive college offers, and to obtain another state championship

-My style of running, I play bigger than what I am, I am more of a speedy back that is hard to take down, as well as an elusive runner between the tackles, as well as outside of the tackles. Also, I have great vision so even if there isn’t a hole I’ll find one or make one, and once I’m gone … I’m gone.

-It is an amazing atmosphere, we have the best fans and student support in the whole state! And with that makes our games even more electrifying to attend!

-If you come it will be like no other high school football game, just the environment and the intensity we bring to the game as a whole allows the whole stadium to rock Friday nights!

-Honestly, it is everyone on our team, not just one person makes up a “team” and knowing by the way we practice and include every single player, I’d say everyone on the team is a key player because without them we wouldn’t be the team we are now.

-My favorite thing about football is the contact and the life skills and the character it teaches you, football is way more than just a sport, it is a lifestyle for me, and without football I wouldn’t be the person I am today. It also brings people together that you may have never associated with or met before and this sport brought together many people who loves the game!

-It is amazing to play for our coach! He is a coach that actually cares about his players and will do whatever he needs to do in order to make you a better player and push you to your limits that you never knew you had.

-We upped the conditioning and we made sure that everyone knows their roles when their on the field, also we prepared a lot for our first game this season, as well as become faster and stronger as a team than last year.

-The interest I have right now are Nebraska, Minnesota, Iowa State and Mizzou. My plans are to make it to the next level and to play at a D1 school that has good academics as well as a good football family for me.

-When I am not playing football I love to listen to music or watch Netflix. Personally, my favorite thing is to workout and watch a lot of football (highlights, games, film, etc.).

-In the next 10 years I see myself living out my dream which is to play in the NFL and to inspire many athletes like me to continue to work hard and to follow your dreams because they will come true.

-My favorite subject is Math, I am a good student. I turn in all my homework on time and I make sure to always study for tests as well as any surprise quizzes. My GPA is 3.7

-My role models are my parents, because they both take care of me and my brother and they always make sure whatever it is we need they can help us with it. They both also set good examples for me and having them two in my life allows for me to want to do the same when I am older and have kids myself.

-The best place hands down is “Joe’s Kansas City BBQ”, they have the best BBQ in the country and whenever you’re around Kansas CITY, KS you have to try them!

-One thing the average person may not know about me is that I am actually a down to earth type of guy, and easy to talk to. I am a really humble kid who just likes to work hard and one who trusts the process, as well as love the process! And I know that good things come to those who wait.

- Just good luck to everyone out there this year playing sports and to have an injury-free season to all.