v Faces in KS: Cooper Beebe - Sports in Kansas 
Warning: include(../includes/bodytag.php): failed to open stream: No such file or directory in /home/kansass/public_html/ks/news/index.php on line 36

Cooper Beebe is looking for another huge year for Piper. (Photo: Tamara Beebe) 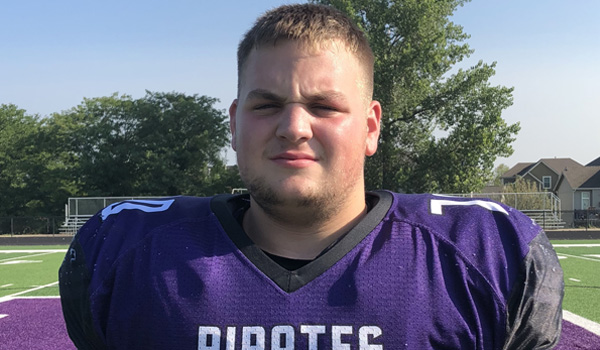 Cooper Beebe, senior lineman at Piper High School in Kansas City, comes from a football family. His dad, Tom, was an All-American at Pittsburg State in the 1980s, while his brother Colton, who now plays for Minnesota, was the Sports in Kansas 4A-I Defensive Player of the Year in 2014 as a senior at Piper.

“I was brought up in a football heavy family, whether we were watching or playing.” Beebe said.

Cooper is a 6-foot-3, 308-pounder, that is one of the top returning lineman in the state of Kansas for the 2018 football season and also one of the top recruits in the state of Kansas for the class of 2019. The Kansas State football commit, who has a 3.97 GPA, has been starting since he’s been a freshman for the Pirates. He chose Kansas State over Minnesota and Kansas, who also offered.

“I really found what I wanted with Kansas State so I wanted to commit there to further my academic and athletic career.” Beebe said.

Beebe isn’t just a big body either. He is very athletic for his size and is just as big of a force on offense or defense. At 308 pounds, he can run a 5.3 40-yard dash and has also been seen running the football before, probably not someone you want to tackle. He also plays varsity basketball for the Pirates. He’s also one of the top returning shot put throwers in 4A, going in the mid 50’s last season as a junior.

“I believe my quickness and technique are a plus combined with my size and strength.” Beebe said.

This fall will mark eight consecutive years a Beebe has started for Piper High School football with Colton starting from 2011-2014 and Cooper starting from 2015-2018. Collin Beebe, a 2016 alum and the second oldest brother, was also a starter for the Pirates in that timeframe. And it won’t end at Cooper either. Younger brother Camden, the fourth and final Beebe brother, is headed into eighth grade and will follow right in Cooper’s footsteps as an immediate impact player. Camden will begin eighth grade this month and is 6’0” and 260-pounds. It’s possible there could be 12 consecutive years of Beebe’s starting for Piper.

Piper struggled last year at 4-5 but does return five starters on offense and four starters on defense for first year head coach Rick Pollard as they enter their first year in the battle-tested Frontier League. We caught up with the senior all-state selection to find out what makes him such a force as a player in the latest Q&A edition of Faces in Kansas.

This feature is presented by the Piper Optimist Club, proud to support the Piper Pirates and Cooper Beebe. Best of luck in 2018!

Chet Kuplen, Managing Partner/Founder of Sports in Kansas, on Beebe

"He's an athlete, an athlete that happens to be a very good football player with size. He has great quickness for his size and is a load for anyone to move off the football. If you hadn't heard of the Beebe name you haven't followed high school football very closely in Kansas over the last eight years. He has a chance to be a player of the year type candidate in 4A on defense this year. I also expect a big spring for him in track and field. Kansas State landed a solid one. Also keep a future look out for younger brother,Camden, who will be in 8th grade this year. He should be able to step into high school next year and keep the Beebe name alive. He could eventually be the biggest and meanest of the bunch when it's all said and done."

My dad played college football and my older brothers also played. I have a brother that plays for the University of Minnesota right now. I was brought up from a football heavy family whether we were watching or playing.

The goals for the team this season are to win the Frontier League and go undefeated in the league and also to make it to the state championship game and potentially win that.

Yes, with a new coach and a different scheme more suited to our team I think with our fast tempo and physicality we have a chance to make a run.

I think what makes me a force as a player is my ability to read an offense lineman to determine how to beat them. I also think that my size, strength, agility and hand placement make me a force as a player.  I believe my quickness and technique are a plus when combined with my size and strength.

The atmosphere is a high intensity high energy crowd. The crowd really gets into the games and gives the true meaning of home field advantage.

It’s a small town feel in a school located in a bigger city setting.

Some of the key players for our team are Kaleb Brown CB, Dalton White QB, Brandon Walker MLB, and LaJames White RB.

My favorite thing about football is getting to compete against the person across from you. I enjoy going head to head with people to help me get to my best. I also enjoy the bond and friendship you develop with your team.

The other sports I play are Basketball and track. I placed 3rd place in 4a shotput at the state tournament last year and will be training to make a run at bringing home the Gold next Spring.

Coach is a very up tempo, disciplined, and aggressive coach. He wants to run down people’s throats and make them quit.

With a new coach coming in we spent most of the off season learning a new scheme. It’s a fast pace up-tempo offense looking to light up the score board. The defense is a physical run stuffing defense forcing opponents to beat us with the pass.

I got a lot of early interest from a number of FBS schools across the country, but with the 3 early offers I got, I really found what I wanted so I have committed to Kansas State University to continue my football and academic career.

When I’m not playing sports I enjoy playing videogames with my friends.

My ultimate goal is to make it to the NFL and have a successful career. I want to have a family and be able to support them.

My favorite subject is history because I enjoy learning about past events and seeing different historical sights. Learning from the past is the key to charting the course for the future.  My GPA is 3.97

My role models are my older brothers. They guided me to be the person I am today and inspire me to do my best.  Growing up with them created the drive to succeed and push harder to be better at everything I do.

Joe’s KC BBQ in KC, but Danny’s Bar and Grill in the immediate Piper area.

I represented my country, my family and Piper High School by playing for the U-19 USA National team in the World Championship tournament in Mexico City this summer.