v Rainbow Comm. Athlete of the Month: Mitchell Henry - Sports in Kansas 
Warning: include(../includes/bodytag.php): failed to open stream: No such file or directory in /home/kansass/public_html/ks/news/index.php on line 36 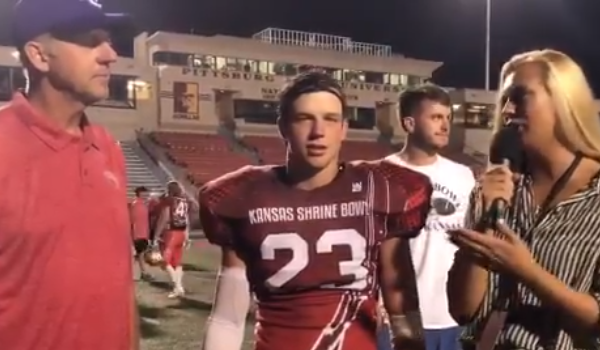 The Rainbow Communications Athlete of the Month for their performance over the month of July is Nemaha Central recent graduate Mitchell Henry for his performance in the 2018 Kansas Shrine Bowl game in Pittsburg, Kansas.

Henry, a 2018 alum of NC, had five tackles on the East squad as a linebacker as they won 21-14 on Saturday July 28th in Pittsburg. Warren Seitz, head coach at Nemaha Central, was also the head coach of the East squad. East has now won three of the last four games over the West. Henry, an all-state football and basketball player, has signed to play this season at Baker University. Henry was also a high school quarterback that could be classified as a utility player as a senior that helped the Thunder to a 10-1 record, including a 8-0 mark in the Big 7 in 2018. Seitz and Nemaha Central haven't lost a Big 7 game since 2014. Mitchell's older brother, Trenton, also played in the Kansas Shrine Bowl in 2017.

Rainbow Communications would like to congratulate Coach Seitz and Mitchell for a win in the 2018 Kansas Shrine Bowl and to Mitchell for an outstanding high school career for the Thunder.