v Faces in KS: Austin Moore - Sports in Kansas 
Warning: include(../includes/bodytag.php): failed to open stream: No such file or directory in /home/kansass/public_html/ks/news/index.php on line 36 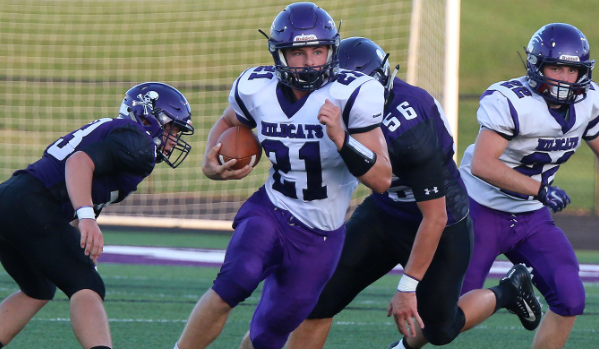 Louisburg High School senior Austin Moore is one of the top returning football players in the Frontier League and Class 4A for 2018.

The linebacker and running back has very nice size as he stands 6-foot tall and weighs 215 pounds. He’s also had two solid years at the linebacker position in which he registered 135 combined tackles with nine tackles for loss, four sacks and two interceptions as a sophomore and junior. Moore also rushed for over 1,200 total yards last year with 15 touchdowns from his running back position. He is primed for a big senior year in 2018.

“I have been playing football since the first grade and have played ever since. We return a lot of starters this year and have a great chance at making a playoff run.” Moore said.

There’s no question that Louisburg returns a lot with eight starters returning on the offense and eight on the defense for head coach Robert Ebenstein. Last year they missed the playoffs in a loaded district and finished at 6-3. This year there are no districts and everyone makes the playoffs in week nine.

Moore will also have the opportunity to play linebacker at the next level. He features 4.7 speed with a 320 bench, 425 squat and a 250 clean. He has received some FCS interest and looks so far heading into his senior season. He also wrestles, where he was a state qualifier in 4A at 195 pounds, going 43-7 on the year. He has over 100 career wins entering his senior season. He's not too bad of a javelin thrower either. He doesn't specialize he plays a sport every season of the year.

Moore is not just an athlete either, he also excels in the classroom with a 4.0 GPA at Louisburg High School, where his favorite subject is English.

“My parents have stressed how important it is to get an education, and have always pushed me to do my best in the classroom.” Moore said.

Right now Moore’s eyes are getting Louisburg back at making a run in Class 4A. The Wildcats, a traditional solid 4A program, are 30-21 all-time in the Kansas playoffs with one state title (2010) and three title appearances in 22 playoff appearances in the modern playoff era. We caught up with the senior linebacker and running back below in the latest Q&A edition of Faces in Kansas.

Chet Kuplen, Managing Partner/Founder of Sports in Kansas, on Moore

"Austin is a solid two-way high school football player. He has the size and strength to be a dominating player this season in the Frontier League and in 4A. Louisburg football is always solid and they always have some players, Austin seems to be that guy this year. He's tough as well, he's got that wrestling mentality and toughness. He could be an all-state caliber kid on both sides of the ball this year. I like him at linebacker at the next level because he can truly see the play developing. He loves to hit as well. His Hudl is worth the look for a recruiter."

I started playing flag football in first grade and I’ve played ever since then.

My team has a great chance at making a deep playoff run this year. We are returning almost all our starters and we are much more confident with the new offense we learned last year.

I try to play as physical as possible on both sides of the ball.

There is always a lot of excitement in Louisburg on Friday nights. The stadium is always full, and you can tell people really care about the game.

Anyone that hasn’t experienced a Louisburg football game should come see one if they enjoy physical football and a team that likes to run the ball.

My favorite thing about football is the friendship it creates with your teammates.

I have wrestled since I was in Kindergarten and it has definitely helped me to become a better football player. I highly recommend it to anyone who wants to improve at football. I also throw javelin in Track and have done 100m and 200m dash.

Coach Ebenstein and the entire coaching staff are all great people that truly care about the program and the players. They push us to be our best and are always there if anyone is going through a tough time.

We worked` very hard in our summer weights program, had a very good camp, and got some scrimmages in against some other teams. Personally, I went to some college camps with a few of my teammates to prepare for the season.

I have received some interest from Northern Iowa, South Dakota, Northwest Missouri State, and Fort Hays State. I also have talked with Coach Seiler at K-State and visited campus a couple times.

Other than sports, I like to go fishing, play video games, and spend time with family.

In 10 years I hope to be a college graduate, and maybe starting a family.

My favorite subject in school is probably English. My parents have stressed how important it is to get an education, and have always pushed me to do my best in the classroom. My GPA is 4.0.

My Grandparents are my role models. They all taught me that hard work pays off and that it is important to have a good relationship with your family.

My favorite place to eat in Louisburg is Timbercreek.

Most people know me as Austin, but my first name is actually Richard.