v Faces in KS: J.C. Shelton - Sports in Kansas 
Warning: include(../includes/bodytag.php): failed to open stream: No such file or directory in /home/kansass/public_html/ks/news/index.php on line 36 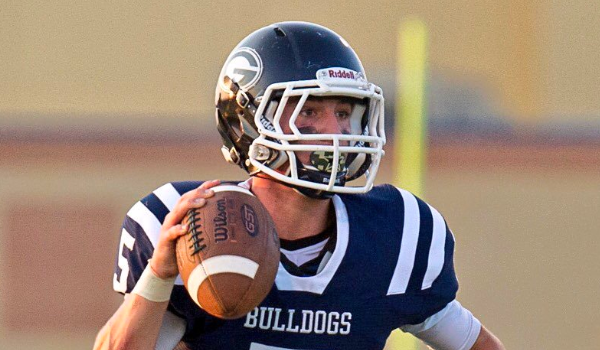 When J.C. Shelton was young, he watched the three Albright boys excel in athletics at Galena High School. Shelton especially saw the two younger ones, Mitch and Troy. Each earned all-state in multiple sports and received Shrine Bowl selections.

Mitch averaged 15 points a game in basketball as a senior, was a four-time first team all-league baseball player and eventually pitched at Missouri Southern.

Troy Albright exceeded 1,000 rushing yards and played for Fort Scott Community College football. Shelton went to his father, Kenny, with a question: “What do I need to do to be like them?”

J.C. is the youngest of four children and has one brother who is 34 years old. Shelton and his father have worked together on and off the field for more than a decade.

Together, they’ve helped Shelton earn all-state honors and a become standout in three phases. Last fall, Shelton was a second team return man on the Sports in Kansas Non-Senior Team and an honorable mention all-state quarterback by The Wichita Eagle.

“I have always dreamed about being all-state,” Shelton said.

This season, Shelton returns as Galena’s starting quarterback after an 11-1 season and trip to the Class 3A quarterfinals. He passed for more than 800 yards, rushed for over 400 and is one of the state’s top return men with multiple punt return touchdowns.

Galena had its first perfect regular season since ’09 and captured the CNC crown for the first time in six seasons. The Bulldogs, on a run of 13 playoff berths in the last 14 seasons, have earned a playoff win the last four falls.

Galena’s quality wins helped the Bulldogs, unranked in the preseason, finish the fall ranked No. 5 in the final KPreps poll.

Galena has six starters back on both sides, including junior running back Logan Henderson, and senior backs Joseph Helton and Kooper Lawson. Helton cleared 900 rushing yards in 2017.

“All of us really came  together to win those really big games, and we’ve all played together since we were pretty much in flag football really,” Shelton said.

Senior wide receiver Blake Booth also returns, along with lineman Weston Ward and defensive end Braydon Roberts. Shelton has been highly impressed with Roberts this summer with his strength and speed improvements. Galena’s roster lists 19 seniors for a team that is expected to contend in 3A in 2018.

“A lot of those guys returning are really big leaders and all the younger guys look up to us,” Shelton said. “And we always have to go out and set an example for those younger guys, and we’ve got a couple more kids this year that are stepping up and have gained some weight and gotten stronger, got faster, so I think we will be all right.”

Galena has also maintained a high level of consistency under head coach Beau Sarwinski. There was a point in time the Bulldogs struggled to win football games in parts of the 90s and early 00s. Prior to 2004, the Bulldogs had only made the playoffs four times in their school history, it was also a day where only one team made it out of districts and nearby rival Riverton was a power. Since 2004, they've made the playoffs 13 times under Johnny Mallatt and Sarwinski, including a sub-state runner-up finish under Sarwinksi in 2009. It's also helped that the Bulldogs have had some solid play at quarterback in that time frame including Jacoby Martin (2010 alum), P.J. Sarwinski (2017 alum) and now Shelton to name a few. They've also had stars in their school like Matt Glades (2006 alum), Sean Glades (2007 alum) and Zach Gougler (2012 alum). Both Glades went on to FSCC and Missouri Western, while Gougler also played at FSCC and Division I at Central Arkansas.

"J.C. Shelton is a big time player for Galena High School. Its been a privilege to coach him the last three years. He's did everything that we've asked him to do and we want him to have a great senior season and lead us. It's been fun to see him grow up over the years and turn into the young man he is today." Bulldog head coach Beau Sarwinski said.

Shelton is immensely proud of his father, a Galena product, and loves playing for the Bulldogs. Kenny is a race car driver, and J.C. has worked pit crew on the weekends. Father and son are working on a car for J.C. to drive next year.

“Very proud to say that my dad is my hero,” Shelton said.

He still maintains strong contact with Mitch and Troy. He has headed over for Mitch’s ranch for horseshoes and roping and is “really close” with Troy.

In first and second grade, Shelton played for his age group team and practiced for his father’s squad, which was a few years older. J.C.  played for his dad in third through sixth grade. A nine-minute You Tube video from 2010 shows Shelton playing quarterback for his third/fourth grade team.

In the clips, Shelton has multiple highlight reel runs and finished the year with almost 600 rushing yards and a kick return touchdown. Currently, Kenny coaches J.C. in another way.

“Best way to coach is at the dinner table,” J.C. recalls his father saying.

In high school, Shelton has shown similar moves to his youth. Now 5-foot-8, 170 pounds, he has a max bench press of 250 and can squat 360 pounds twice. He has received interest from Benedictine College and ran 4.54 seconds in the 40 in their combine this summer. Shelton is generally listed an “Athlete” for recruiting purposes and tried out at cornerback for Benedictine. He would like to play at the next level.

“We get so much film on everybody, it’s insane,” he said.

Shelton loves home games in Galena. People close down businesses and tailgating occurs before and during the contests. Shelton gets goosebumps every time he sees the lights.

The community has watched Shelton perform at a high level the last two years.

In 2016, Shelton broke a 13-13 tie against Colgan. With 5 minutes, 58 seconds left in the third quarter, Shelton broke three tackles on a punt and sprinted for a 69-yard score, the turning point in an eventual Bulldog victory.

“The big thing about returning is you’ve got to make the first man miss,” Shelton said.

Last year, Shelton switched to quarterback after he was running back as a sophomore. He delivered a pair of rushing scores against Frontenac. In the critical CNC contest versus Columbus that matched then-two unbeaten teams, Shelton scored a late touchdown run for the victory.

Earlier in the game, he delivered an 80-yard punt return. Shelton said he returned three punts for TDs in ’17 and credited his teammates for a “huge wall” of blocking to spring the returns.

Against Columbus, Shelton juked the first defender, who grabbed ahold of Shelton’s jersey.

“I don’t know how I kept my balance after that,” he said.

Shelton recovered and eventually scored. The victory ended a five-game losing streak against Columbus from ’12-16.

This feature is presented by MVP Athletics. Proud to support J.C. Shelton and the Galena Bulldogs.

Chet Kuplen, Managing Partner/Founder of Sports in Kansas, on Shelton

"He was huge for their team last year. I liked him as a utility type player as a sophomore but man he really shined with the ball in his hands every play stepping in as a first year starting quarterback last year. He's one of the best return guys in the state and can take a punt/kick to the house at any time. You can do a lot of things with him. He might as well get his CDL because he does everything but drive the bus to the away games.He plays quarterback, punter, kicker, defensive back, kick returner, punt returner and he could be a running back or reciever. He won't pass the eye test in street clothes to recruiters because he's not big but don't let that fool you, he's a nice athlete and is quick. He makes things happen and seems to always come out of the pile or extend plays. I expect another big year for him. He's one of the top returning players in 3A. You also got to give a lot of credit to the lineman and other members of the backfield, they had a loaded group last year and do return quite a bit this year. They are physical. I grew up in the area and Galena was not very competitive when I was in high school, now they are a CNC power. Coach Sarwinksi has done an oustanding job with all these young men over the years. Big fan of following the Bulldogs, they are always tough and Beau always has him a good team down there in Galena."

I was in first and second grade.

A lot of those guys returning are really big leaders and all the younger guys look up to us, and we always have to go out and set an example for those younger guys, and we’ve got a couple more kids this year that are stepping up and have gained some weight and gotten stronger, got faster, so I think we will be all right.

Don’t count us out.

Every time I walk out there, I get goosebumps.

“Everybody just goes to the game.

All of us really came  together to win those really big games, and we’ve all played together since we were pretty much in flag football really, so it was just really cool for all of us to come together.

Baseball, basketball, track, I will run track this year.

How proud he is to be a part of this great community.

Benedictine, went there this summer. I would love to (play college).

Hunting, fishing and hanging out with family.

With a really great job as an electrical engineer.

Very proud to say that my dad is my hero.

Two Mexican places in Galena (Mi Torito and Nogales). The only difference is the salsa, probably eat there three to four times a week

Some of my friends just figured out my name last year when my English teacher started calling me James.