v Faces in KS: Caleb Grill - Sports in Kansas 
Warning: include(../includes/bodytag.php): failed to open stream: No such file or directory in /home/kansass/public_html/ks/news/index.php on line 36

Caleb Grill is one of the top multiple sport athletes in Kansas. (Photo: Rich Norrod) 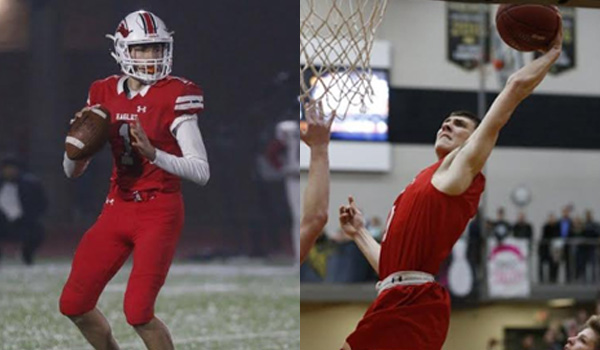 The month of August will be a busy busy for one Maize High School student, Caleb Grill. On the first day of the month, the 6-foot-3 senior shooting guard committed to play basketball next school year with South Dakota State, a Division 1 program in Brookings. The last day of the month Grill will be suited up in the pads and will strap on his helmet for the Eagles’ football team, as the team’s starting quarterback. In the spring, he's one of the states top high jumpers. There really is no off-season for the senior at Maize.

The busy month is what Grill has come accustomed to, as he has been traveling all over the midwest for tournaments on the weekends and busy lifting and working on his basketball and football skills during the week. Grill has really picked up a lot of interest from college coaches for his basketball play over the summer. While playing for the Next Level Hoops Academy out of the Wichita area, Grill has been able to showcase his athleticism and basketball IQ.

For Grill, the love for basketball came at a young age. He’s loved the game ever since he can remember and has always had the support and encouragement from his parents. In fact, his dad, Chris began coaching Caleb in third grade and Caleb has appreciated all of the help that Chris has gave him. Caleb is luckily enough to have his dad as the Eagles’ varsity boys basketball head coach, as well.

Grill averaged 17 points per game last winter for Maize, while also adding over three rebounds and three assists per contest.

But, until basketball practice begins on November 12, Grill plans on helping guide the Eagles to a successful football season. Last season, Grill threw for 2,054 yards during the Eagles’ 9-2 season that took them to the 5A regionals, where they lost to eventual champion, Bishop Carroll. Maize will open up the 2018 season on the last day of August at home against Valley Center. Last season Grill was an all-state pick on the Sports in Kansas Non-Senior team at Quarterback.

Chet Kuplen, Managing Partner/Founder of Sports in Kansas, on Grill.

"I think he has an opportunity to be the best three-sport athlete in the state of Kansas this school year. He's a very good quarterback and could play college football if he wasn't a major basketball prospect. South Dakota State got a major talent in landing him as everyone in the country was coming in on him this summer. He is a major talent that is a freak athlete. He can jump out of the gym and is explosive. I love that he doesn't specialize and gives his full effort to his schools teams in every sport. He's a special talent. I dont think people realize how good of an athlete that he actually is."

Q: South Dakota State was the first program to offer you prior to your junior year of high school, so what made you choose to be a Jackrabbit?

A: “It was important to me to find a program where I felt like I had a great relationship with the players and coaches. I wanted to fit the style of play and make an impact on the program.”

Q: What's your summer been like? Have you focused much on football, or has the focus mainly been on basketball?

A: “My summer has been busy with both basketball and football. Football weights and conditioning start at 6:30 every morning, that along with 7 on 7 every Tuesday, and a couple padded football camps in June. In addition to that, I try and get in the gym 6 days a week to work on basketball outside of scheduled AAU practices. In July my NLHA team played in three AAU NCAA live tournaments.”

Q: Did you ever think about going somewhere to play football and basketball?

A: "As much as I like football, basketball has always been my favorite and I knew that’s what I wanted to play in college. The time commitment to each sport would not allow me to play both in college.”

Q: What's it been like playing for your dad at Maize?

A: "My dad has been my coach since 3rd grade. I know what to expect and I wouldn’t want to play for anyone else.”

Q: When did your love for basketball first begin?

A: “I’ve loved the game ever since I can remember.”

Q: How do you feel that you'll fit in with the Jackrabbits?

A: “I feel like I already have a great relationship with the coaches and players. We talk often and get along well. Last weekend I played against another 2019 commit out of Aurora, Nebraska and another 2019 commit drove 6 hours to watch us play in the tourney. We hit it off the minute we met and have been in communication on a regular basis since. Coach Otzelberger plays an up tempo offense and likes to get up a lot of threes.”

Q: How much do you know about SDSU and how much have you had to research about the school and program?

A: "I’ve been on two unofficial visits and immediately felt comfortable with the coaches and players. I talk with several of the players on a regular basis and feel like I’ve known them for a long time. I watched many games throughout their season."

Q: Describe your play? What makes you so good? What're your strengths? Weaknesses?

A: “I feel like I have a high basketball IQ and really understand how to use my strengths to help me and my team. I’m a good shooter and teammate and feel like I need to improve my strength and ball handling."

Q: What can we expect from the Eagles this winter?

A: "You should expect to see a great group of guys, having fun, playing for one another. I think we can make a run at state and win another league championship."

Q: What was it like to have so much recruiting attention on you?

A: "It was exactly what I hoped for and it was a dream come true. I've worked really hard to get where I'm at and with the help of great coaches and teammates, my efforts were recognized. I built relationships with some great coaches that hope will be my colleagues someday."

Q: How do you feel the sport of basketball is growing in the Wichita area?

A: "I think the Wichita area has always had great basketball. MAYB has grown tremendously since I started playing in the third grade. And with the new facility at Next Level Hoops Academy, i'ts allowed for some elite tournaments to be held in Wichita. The Great American Shootout and Mullen's High Profile Tournament have both been held here and have brought in a lot of D1 coaches."

A: "I'm a huge Star Wars fan and I've never flown in a plane. My first plane ride will be September 15th when I travel for my official visit at SDSU."

Q: What's your favorite restaurant to eat at in the Wichita/Maize area?

A: "Nippon Japanese Grill in Maize."

Q: Do you have any game day routines or superstitions?

A: "My dad goes through the same stretching routine with me before every game."

Q:Who's your favorite NBA player and what do you think about LeBron going to the Lakers?

A: "Giannis Antetokounmpo. I like it, because I want to see him compete in the Western Conference."