v Faces in KS: Darnell Holloway - Sports in Kansas 
Warning: include(../includes/bodytag.php): failed to open stream: No such file or directory in /home/kansass/public_html/ks/news/index.php on line 36 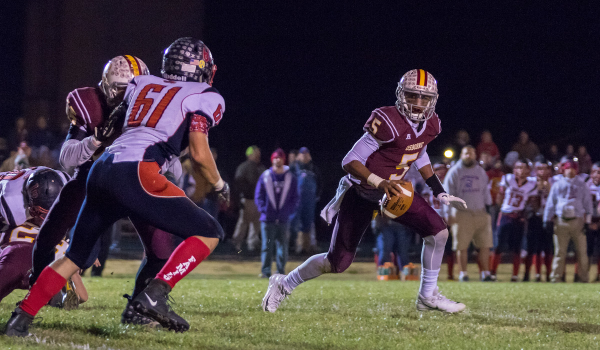 There are players at every level in Kansas and in this case we go to Osborne, Kansas, located about 45 minutes north of Russell and I-70, to feature one of the top returning 8-man players in the state in Osborne High School senior Darnell Holloway.

The 6-foot-3, 195-pound, senior, quarterback, has only played one year of high school football and he put himself on the map last fall in leading the 8M-I Bulldogs to a 9-2 record. This year the Bulldogs have moved down a division to 8M-II.

"Last year was my first year of high school football after being injured as a freshman and having to sit out due to transferring from Russell my sophomore year." Holloway said.

Holloway has a nice combination of size and speed, being clocked as fast as 4.59 in the 40-yard dash this past off-season. As a sophomore, two years ago, he ran a 10.78 in the 100 meter dash in track and field. He has generated interest from Brown University, Chadron State, Emporia State, Fort Hays State, Kansas State and Western Illinois. He could project in multiple positions as the next level and is likely to be recruited as an ATH or QB. He's a guy we see right now as a sleeper recruit in the class of 2019 that could turn some heads this season.

"Playing college football is a huge goal of mine. It is all I have ever wanted to do." Holloway.

Another disadvantage for Holloway and the majority of any Kansas kids is going under the radar due to the area that they play in. Playing 8-man football in an area that isn't populated by a major city or recruiting target can also be a bit tougher to generate interest.

"A majority of people see 8-man as not real football, but honestly if you havent watched it you have to go. It's fast, real fast and a lot of fun. On top of that our community is so supportive of the hometown. You definitely need to come check it out." Holloway said.

Osborne, led by first year head coach Brandon Wise, after taking over for Cullen Riner in the off-season, will be one of the teams to check out this year as they return four offensive starters and five defensive starters for 2018. Holloway returns as the signal caller after passing for 783 yards with 12 touchdowns while rushing for 808 yards with 14 touchdowns. He earned 8M-I all-state honorable mention honors on a team that was loaded with offensive talent and production spread out.

Also returning this season is Holloway's youngest brother, Darrien, a running back and wide reciever, that could be one of the better athletes in the 8-man ranks. He won the 1A 300 meter hurdles last spring as a sophomore.If you haven't heard of the Holloway brothers of Osborne yet, more than likely you will by the end of the 2018 season.  Kade Miller is also a solid, solid player that returns at fullback, wide reciver, and linebacker that will contend for all-state honors. Jordan Wherry will look to anchor the offensive and defensive lines.

"Everybody on this years team will play a key role and everyone will have to play a huge part for us to win it all this year." Holloway said.

Osborne will kick off practice next Monday and will be one of the top 8M-II teams in the state this season after going 9-2 last year in 8M-I with an upset loss to St. Paul (24-35) in the 2017 8M-I playoffs. Last year Osborne was on the East bracket of 8M-I, while this year they will be on the West bracket of 8M-II. We caught up with the 2019 ATH prospect below in the latest edition of Faces in Kansas.

Chet Kuplen, Managing Partner of Sports in Kansas, on Holloway

"Darnell has a nice combination of speed and size. Would have really liked to see him in track last spring but I have seen enough on him to know he's a very good athlete. When you play in a small town and don't get to face off against other recruits, week in and week out, it can make it difficult for kids to get discovered. However there are enough combines and social media out there now that his name will be out there this season for people to at least get a look at him. Osborne had all kind of weapons last year so his stats don't show you exactly the player that he is. Along with Kade Miller and his brother, I definitely have my eye on this team in 8M-II this year. Many have been calling for a Hanover and Osborne state title game this year, its defintiely a possibility with the group Osborne returns."

This feature is presented by Holloway Brothers Racing, proud to support the Osborne Bulldogs and Darnell Holloway.

I got involved in playing football when I was young and playing back yard football with my brothers until I was old enough to play flag football and now I’m here, as a senior in high school.

Win state and reach our potential.

Absolutely, there’s not a doubt in my mind that we can’t be where we want to be this year. Our team this year is fast, real fast.

I can beat you with my legs or my arm. I’m determined to make plays for my team and put points on the board at all costs. Our back field can make things happen and we expect to score every time we get the ball. With my size and speed I feel as if I can play at any classification whether that is 1A, 2A, 3A, 4A and so forth.

Osborne really loves their football and playing on Friday’s here in Osborne is one thing I’ll never forget. Everybody shows up to the games and cheers loud and proud for their Bulldogs especially when playoffs come around.

A majority of people see 8 man football as “not real football” but honestly if you haven’t watched an 8 man game you have to go. It’s fast, real fast and a lot of fun. Everybody goes to the games and supports their hometowns it’s just a lot of fun.

Everybody on this year’s team plays a key part but my younger brother, Darrien Holloway (RB, WR, LB), Kade Miller (FB, WR, LB), and Jordan Wherry (C, DT) play a huge part for us to win it all this year.

My favorite thing about football is building a brotherhood and just doing anything you can for your brothers on the field. You’re a family and being a family is the most important thing about it. Pushing each other and the team reaching its potential.

I didn’t run track this last year but I’ll be doing track and playing basketball. I received All State Honorable Mention in basketball.

It’s a blast playing for Coach Wise and Coach Riner. They push you to be the best player you can be on and off the field. They expect the upmost from everybody whether you’re a JV player or a Varsity player, they look at everybody the same. We’ll give everything we’ve got for our coaches.

We conditioned A LOT and we all got a lot stronger. Everybody’s weight went up and coach does a good job of getting us in shape.

I’m receiving interest from Emporia State, Kansas State, Fort Hays State, Western Illinois, Chadron State, Brown University and a few other schools. I definitely plan on playing college ball, that’s all I ever wanted to do as a kid and is still a goal of mine.

My favorite thing to do when I’m not playing sports is hanging out with friends and playing Xbox.

I see myself as a personal trainer in the next 10 years.

I have two favorite subjects, one being English and the other being Science. I put a lot of effort in school, I’m not the smartest guy but I stay on top of my school work.  I don’t know my exact GPA but it’s around a 2.8 to a 3.0.

My role model growing up definitely was my older brother, Reshean Holloway when he played in high school. My role models today are my cousin Alex Delton and Cam Newton.

Rumor Mill in Osborne is definitely the best place to eat in town to me. We also have some pretty good Hunts Brothers Pizza at Corner Cupboard.

Last year was my first year of high school football due to transfer rules and an injury my freshmen year.