v Faces in KS: Darin Robertson - Sports in Kansas 
Warning: include(../includes/bodytag.php): failed to open stream: No such file or directory in /home/kansass/public_html/ks/news/index.php on line 36

Darin Robertson has transferred to Gardner Edgerton after a big year at BV North. 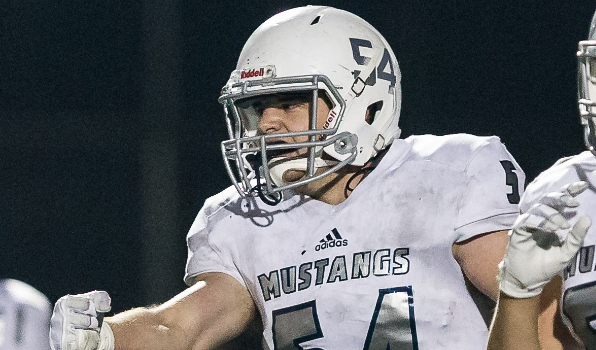 Ryan Cornelsen played for his father, Gary, the legendary high school football and track coach in Liberal. Ryan has enjoyed immense success as a head coach at multiple stops, often with a sizable improvement in his first year.

Cornelsen, who took over 0-9 Gardner-Edgerton for this fall, has never had a losing season. The Trailblazers returns eight offensive and seven defensive starters and adds transfer linebacker Darin Robertson. He could also see time at fullback and offensive line.

Last fall, Robertson led 6A champion Blue Valley North with 42 solo tackles and 93 stops overall, along with eight tackles for loss and two sacks. His brother, Thatcher, was also one of the top linebackers last fall in the Eastern Kansas League.  Darin earned second team Sports in Kansas Non-Senior honors last fall, meaning he is one of the top returning linebackers to watch for in Kansas for 2018. Robertson, due to mom’s work, briefly transferred to Labette County in the spring and then to G-E.

“Coach Cornelsen is a fiery, ready to get after it kind of coach,” Robertson said. “He always preaches having heart for the game, body language, and work ethic.”

First, Cornelsen served as an assistant for WaKeeney-Trego in 2002. The Golden Eagles doubled their win total from the previous fall and finished 10-2. WaKeeney has not won a playoff game since.

Then, Cornelsen went to La Crosse as head coach and was 53-13 with the Leopards. La Crosse twice achieved four-win improvements in his six-year tenure. Next, Cornelsen headed 25 miles due north to Hays High.

In his third season, he led Hays High to the playoffs for the first time since 1995. Cornelsen was 35-12 at Hays, compiled with the highest winning percentage in HHS history, according to longtime Indian broadcaster Dustin Armbruster (min. 10 games).

After Hays, Cornelsen replaced Randy Dreiling at Hutchinson. Dreiling won seven state titles in 17 falls and posted 5-4 in his last year. In his first season, Cornelsen led the Salthawks to a three-win improvement, an 8-5 mark and state runner-up showing. Cornelsen has won five state track titles, four at Hays and one at Hutchinson.

After a 25-15 record at Hutchinson, Cornelsen accepted the Gardner-Edgerton job from longtime coach Marvin Diener. After a long run of success under Diener, G-E is 6-31 in the last four years.

In addition to Cornelsen, Mark Simoneau will run the Trailblazer weight room. Simoneau is well-known for Smith Center, Kansas State and NFL career and current work as a strength coach. He has previously trained Robertson.

“With Simoneau being the new weights coach, he has already completely turned around the way the team lifts and runs,” Robertson said. “We push each other to show that we won’t be the same team Gardner has been the last couple of years.”

The Trailblazers switched from the Eastern Kansas League, the state’s best conference, to the Sunflower League. The Trailblazers should have an easier schedule after the No.5-hardest SOS according to Prep Power Index last year.

Personnel-wise, Robertson is one of the key players back and looks to lead a big improvement. G-E was close in multiple games last year with losses by 11, seven, five and twice by 14 points.

The Trailblazers should fare better in close games this fall.

In his first seasons at Hays and Hutchinson, Cornelsen led an average improvement of 6.3 points on offense and 2.8 points on defense. In 2017, Sixty-four percent of the Trailblazers’ rushing yards came from non-seniors. G-E played two quarterbacks, and both were sophomores.

The 6-foot, 202-pound Robertson should immediately help. He comes from excellent bloodlines with Viking heritage, and his father was a linebacker at University of Missouri.

His role model is his mother, Jacqueline, because of her “hard work and dedication” for the family. He has no offers yet but has received interest from a variety of schools, including Indiana State, Missouri, Pittsburg State and Kansas.

“The team comes first,” Robertson said. “Knowing that I can help the team motivates me to give everything I have every snap. Studying hours of film and knowing my pre-snap responsibilities along with my reads, allows me to get to the ball as fast as possible.”

“With the new coaches and running a different style offence and defense, we have a chance to make it a special year,” Robertson said.

Chet Kuplen, Managing Partner of Sports in Kansas, on Robertson

"He's pound for pound one of the strongest kids in the state. He had a huge year last year for the best team in 6A. I feel like he will be a great addition for a program that is trying to rebuild this year in Gardner-Edgerton. It will also help they are going to the Sunflower League. I feel like he has an opportunity to be one of the best linebackers in 6A this season."

Help Gardner Have a turn-around season

With the new coaches and running a different style offence and defense, we have a chance to make it a special year

The team comes first. Knowing that I can help the team motivates me to give everything I have every snap. Studying hours of film and knowing my pre-snap responsibilities along with my reads, allows me to get to the ball as fast as possible.

I have only played away at Gardner’s stadium but its always a loud crazy atmosphere. My teammates say that it’s an experience like no other

I can’t single anyone out, every game has to be a complete team effort to win

Weightlifting and grew up playing soccer and baseball

Coach Cornelsen is a fiery, ready to get after it kind of coach. He always preaches having heart for the game, body language, and work ethic.

With Simoneau being the new Weights coach, he has already completely turned around the way the team lifts and runs. We push each other to show that we won’t be the same team Gardner has been the last couple of years

Many schools have contacted me but the most interested at the moment are Indiana State, Mizzou, Pitt-state, and some interest from Kansas

Spending time with my family

Math, conscientious of my classmates, 3.5

I have Viking Heritage

I’m a strong believer in family including my football family