v Faces in KS: Kyler Hoppes - Sports in Kansas 
Warning: include(../includes/bodytag.php): failed to open stream: No such file or directory in /home/kansass/public_html/ks/news/index.php on line 36

Kyler Hoppes is looking to lead Mac to the 4A title game this fall. (photo courtesy of CDKpiks) 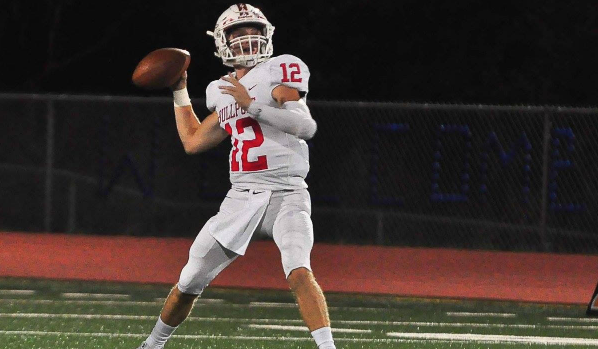 Certain football programs have a tradition of success with a certain position or scheme.

Sedgwick and Wichita Northwest’s hallmarks are their blur offenses with quick tempo. Maize South is notable for his airtight defense. Aquinas has its flexbone offense with Randy Dreiling.

McPherson is most well-known for its basketball programs. On the gridiron, coach Jace Pavlovich has built one of Class 4A, Division I’s elite defenses for the Bullpups.

However, McPherson has also had a decade-plus stretch of outstanding quarterback play that would be arguably better any team in the state, excluding Bishop Miege.

After he retired, Pavlovich, McPherson’s defensive coordinator, took over as head coach in 2015. From 2008-17, five players have started at signal caller for the Bullpups. That includes this year’s incumbent, Kyler Hoppes.

Last fall, he led McPherson to a 10-2 record and semifinal appearance, tying the best showing in school annals.

The 6-foot, 170-pound Hoppes is slightly undersized but has delivered huge production and highlight reel moments, just like one of his role models, Oklahoma Heisman Trophy winning quarterback Baker Mayfield.

Last fall’s first-round playoff game against Buhler was tied at seven entering overtime. The Crusaders scored first, and then McPherson tallied a touchdown and decided to go for two.

Jace Kinnamon lined up in the Wildcat on the two-point attempt and sprinted left. He tossed the ball to receiver Gabe Hoover on an apparent reverse.

Hoover then flipped the ball to the right side to a wide-open Hoppes for the winning conversion. Hoppes had motioned from his QB position to tight end on the right side before the snap.

“The play call that will forever be remembered as it was the finish to what many on Saturday were calling the greatest in Bullpup history,” longtime writer Steve Sell, who has chronicled McPherson athletics for decades, wrote after the game.

In each of the last 10 seasons, McPherson has passed for at least 1,000 yards. Each quarterback has at least one season of 2,000 total yards – and several have had multiple years of such success.

Matthews threw for 2,650 and 2,847 yards in his two Bullpup seasons. He narrowly lost quarterback battles at TCU (to eventual second team All-American Trevone Boykin) and Southern Miss and spent some brief time on the New Mexico State roster.

Then, Kyler Kinnamon started three seasons, including one year where he rushed for 1,662 yards.

Casen Hoover took over and finished with 2,139 total yards his senior year.

Last season, Hoppes continued the tradition of excellent signal calling. He completed 151 of 237 passes for 1,936 yards with a 23/8 TD/INT ratio, along with 54 carries for 246 yards and six scores.

McPherson averaged 34 points a game, 165 passing yards a contest and won 10 contests, all the most since 2012.

“I’d definitely open up to playing at the next level,” Hoppes said.

Jace Kinnamon returns after an all-purpose season where he rushed for 1,079 yards and averaged 38.4 yards per punt.

“It is a great atmosphere,” Hoppes said. “Even though we are known as a basketball town, you can count on the stands always being full.”

However, McPherson has never played in a state title game. The Bullpups have made the semifinals in ’87, ’08 and ’17. Hoopes looks to achieve history this season.

“Make McPherson history by making the title game for the first time,” he said of the team’s goals.

Following the Buhler win, McPherson defeated Maize South, 28-7, after a regular season defeat versus the Mavericks in Week 2. The Bullpups fell, 20-13, to eventual state runner-up Andale in the semifinals. McPherson finished fourth in the final 4A-I rankings.

This year, McPherson a strong contender in newly formed 32-team Class 4A. The Bullpups, often times the smallest 5A school, is now the seventh-biggest 4A schools. Miege, McPherson, Buhler, Goddard and Pittsburg are among the headliners.

Chet Kuplen, Founder//Managing Partner of Sports in Kansas, on Hoppes

"Everyone always thinks of basketball when you think of Mac as you should but they play some pretty darn good football out there as well. I really feel like Kyler has the opportunity to be one of the better guys in Kansas this year. I know Goddard, who lost some key talent, moves down to 4A this year and you still have Buhler who is always going to be good, but the more and more I look at it, I really like the opportunity for McPherson to be one of the representatives in the state title game this year on the 4A West. It won't be an easy path by any stretch but they are my favorite on paper, you also lose Andale to 3A and Maize South up to 5A. Any time you have your starting quarterback back, and an all state caliber one at that, you have an opportunity to be a very good football team. You lose some very solid guys on their defense but I still expect big things."

Growing up, my dad was a head football coach.

Make McPherson history by making the title game for the first time .

My ability to not have to think about plays. … I just know the offense well.

It is a great atmosphere. Even though we are known as a basketball town, you can count on the stands always being full.

Should come to one of our games because the atmosphere is great, and we’ve proven to be pretty good.

Basketball and Golf. Hoping to return to state in both of those again this season.

Playing for coach Pav is great. Always upbeat and always willing to try new things. He trusts us to make both mental and physical plays on the field.

Went to team camps as well as doing 7v7 tournaments, and always grinding in the weight room.

Although I don’t have any offers, I’d definitely open up to playing at the next level.

Most likely not in the state of Kansas

Off the field is definitely my dad. On the field is Tom Brady for his play and Baker Mayfield for his swagger.

Fashion is a major key.