v Faces in KS: Jonathan Hunnacutt - Sports in Kansas 
Warning: include(../includes/bodytag.php): failed to open stream: No such file or directory in /home/kansass/public_html/ks/news/index.php on line 36

Jonathan Hunnacutt is one of the top kickers in Kansas. (Photo: Charlene Juenemann) 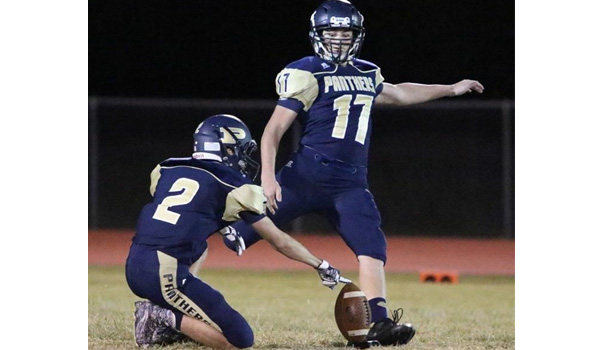 In 2012, Phillipsburg’s Justin Juenemann was statistically the state’s best kicker. He made 42 of 45 extra points and 6 of 9 field goals with a long of 45 yards as a senior.

Juenemann paced Kansas in touchbacks, kickoff yards and points. He was nominated for the Kpreps Dylan Meier award, the Kansas’ high school football award that recognizes on- and off-the-field accomplishments.

Juenemann went to the University of Minnesota, and while he never appeared in a game, earned nationwide acclaim in fall 2017. Minnesota coach P.J. Fleck granted Juenemann a scholarship for his work off the field, especially in the hospital. He appeared on ESPN SportsCenter and several other programs. Juenemann also collected Academic All-Big 10 honors.

In ’16, Juenemann started to work with Jonathan Hunnacutt, who has now become an all-state kicker. Hunnacutt played premier soccer, summer and fall baseball in the Kansas City area from second to sixth grade.

Then, his family moved to Phillipsburg for his dad’s job and to live closer to family. He started playing football in seventh grade and learned kicking from Juenemann when he was home from Minnesota on school breaks.

“He just picked up from where Justin left off,” Phillipsburg coach J.B. Covington said.

Last season, Hunnacutt had 100 kicking points with eight field goals and 76 extra points. He either led the state or was among the leaders in field goals, extra points, kick scoring and total kickoff yards.

He had 26 kickoff touchbacks, and 15 kicking points scored in one game and twice made a long of 39 yards. In practice, he has made a 54-yard field goal.

He earned first team all-Mid-Continent League kicker honors in 2017, besting Plainville’s Tanner Copeland, who was the Kpreps 2-1A all-state kicker. Hunnacutt was named to the Sports in Kansas Non-Senior team.

Hunnacutt was also first team all-league as a sophomore when he had 62 kick scoring points with 50 extra points and four field goals. He delivered 15 kicking points in one game, had his only onside kick recovered by the Panthers and made a 38-yard field goal for his long. He was all-state as a junior and honorable mention all-state as a sophomore.

This year, the veteran-laden Panthers are a strong contender in 2A. Hunnacutt needs 53 points to break the Kansas’ kick scoring record of 214 points held by Olathe North’s Joe Garcia in ’94-96. Garcia holds the single game mark of 17 points, according to the Kansas Sports Hall of Fame.

“It allows us to do some things that we might not do if we didn’t have a kicker that we could depend on for 40, 45, 50 yards,” Covington said. “And there is some times where we will take chances a little bit more in the middle of the field knowing that we can line a guy up there and get us three if we don’t end up getting the first down.”

Hunnacutt, who has not yet received any official offers, is pound-for-pound very strong with a 270 bench, 475 squat and 260 clean. He saw some spot time on defense in ‘ 17 and could see snaps at defensive end, too.

An avid video gamer and four-sport athlete with a 3.7 GPA, he has communicated with a “handful” of Division I and II coaches and would like to kick collegiately and study computer science/engineering. He kicks around three times a week and has attended selective college kicking and prospect showcases.

Last year, Phillipsburg permitted 10.4 points per game, one of 3A’s top marks. The Panthers did not allow a first quarter point until Marysville. This year, Covington believes Phillipsburg can have an even better season defensively, in part because of field position Hunnacutt provides with his leg.

You wouldn't think a kicker at a small high school would be utlized a lot, but that's not the case here. Phillipsburg scores a lot so he's on the field kicking PATs and then kicking off right after. He had eight field goals last year, which is an awesome number no matter what level you are at in high school. Not only does he have range and power, he has accuracy going 8 of 11 on field goals last year. Kickers don't always have a ton of opportunities but Hunnacutt has taken advantage of every opportunity he has and gives them an extra option on fourth down if they need a score and helps big time in field position. Even without a field goal this year, which is not likely, he will have an opportunity to break the Kansas all-time record for points scores as a kicker in a career because of Phillipsburg putting up a ton of points and him connecting on the PAT.

I played year round premier soccer, summer & fall baseball from 2nd to 6th grade. My family then moved to Phillipsburg KS from KC Metro area for my dad’s job and to live closer to family. I decided to go out for middle school football in seventh grade, because that is what my classmates told me middle school kids do in western kansas communities like Phillipsburg. I first started to learn football kicking during my soph year when I got to practice kicking with Justin Juenmann when he was home from University of Minnesota during school breaks.

Yes. Our team has unique combination of key players returning. Our team needs to get better everyday during summer and fall season, because we need to replace key components from last season.

I am a weapon(force) for my team because I can make FG’s from 50+, KO touchbacks, and think fast on my feet to make adjustments to tackle a kick returner who may try to break a long return.

Our stadium atmosphere is intense with energy and excitement from our Panther nation. As with home and away games, the stadium is packed with Panther fans. Every game feels like everything that you have ever done in the past leads up to upcoming game.

You want to come to our games because you can see all the hard work our team puts into being ready to play and all of the excitement that the fans and players exhibit.

My favorite thing about football is kicking and scoring points for my team and specialists group.

Playing for my coaches is a brotherhood and life lesson experience. They have shown me how to work my butt off in the weight room and for the things I want to do in life. They have also helped me become better than I ever thought I would be.

I kick three times a week and lift weights on weekday mornings with my teammates before school and throughout summer. I have attended selective college kicking and prospect camps to help improve and showcase my kicking skills. As a team we had our summer camp and continue to lift weights four days a week to finish our summer.

I am communicating with a handful of D1 and D2 coaches at this time. My plans are to continue kicking at the collegiate level and and study computer science/engineering.

Playing video games with my friends.

I see myself working for a company being a systems engineer. As well being a pro video game streamer at night.

My favorite subject in school is video production class. My current GPA is 3.7.

My dad, because he wants me to continuously improve to be the best even when I try to avoid it. He has also taught me to never give up even when it’s hard. He is an amazing role model in sports and life because he has played competitive high school and college sports.