v Faces in KS: Parker Willis - Sports in Kansas 
Warning: include(../includes/bodytag.php): failed to open stream: No such file or directory in /home/kansass/public_html/ks/news/index.php on line 36 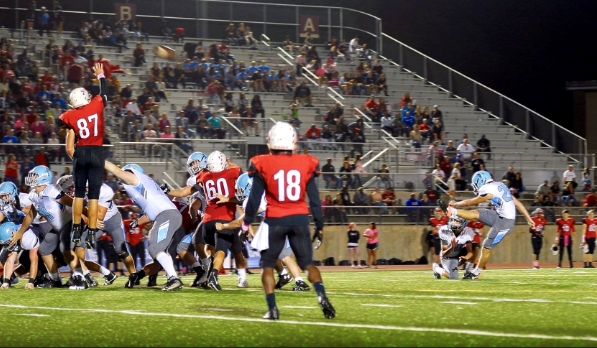 July 18 encapsulated Shawnee Mission East senior kicker Parker Willis’ priorities. In the morning, Willis, as he often does, went up to the high school. He worked with his snapper and practiced his kicking and punting.

Then, Willis, heavily involved with Leawood Presbyterian, headed to the church at 4 p.m. for practice for that night’s Vacation Bible School skits. From 5:30 p.m. to 8:30 p.m. he performed skits and helped the kids with various activities.

Since it was the last night of VBS, the high schoolers stayed at the church from 8:30 to midnight playing games and hanging out together. That weekend, Willis headed to another prestigious kicking camp in Wisconsin.

Faith, football and traveling the country are the three main focuses for Willis.

His Twitter account has 1 Corinthians 10:31 (so whether you eat or drink or whatever you do, do it all for the glory of God) and two football photos – one kicking his well-known 56-yard field goal and another one on a kickoff.

“My faith is a really big part of my life and football,” Willis said. “I’m really involved with my youth group at my church and Klife, which is another group similar to youth group. All my best friends are in these groups and we’re all really close, and the leaders have been a really big part of my life, leading and guiding all of us spiritually.”

Football is the only sport Willis plays, and he has already earned scholarship offers from Army West Point and Air Force. Last fall, Willis earned statewide attention when he kicked the 56-yarder at the end of the first half against Shawnee Mission North in a 59-6 Week 5 win.

Then-SM East coach Dustin Delaney walked over to Willis before the kick and said the Lancers were probably going to try a field goal. Willis looked out and saw East was around midfield.

Willis had little nerves and SME gave him a great snap and hold along with good blocking. He made the attempt with room to spare. The length was one yard off the state record of 57 set by Blue Valley’s Mike Ross in 1993 and Shawnee Mission West’s Sean Simoneau in ’94.

“Then everyone came running at me,” Willis said.

Willis was born in Texas and went to elementary school in Pennsylvania. His dad got a job transfer and could move to Portland or Kansas City. Willis said the family “didn’t know anything” about either place but chose Kansas City.

“We have liked it a lot since coming here,” Willis said.

Willis played soccer and started kicking his freshman year. Delaney, who finished 52-8 with a state crown in ’14 and then took a job in Colorado after last fall, asked if any soccer players wanted to kick. Willis tried out and made the team.

In the winter after his freshman season, Willis attended his first camp to start learning how to kick. Willis realized he really enjoyed the sport and “might have a chance to be good at it.”

Including family trips and kicking camps/showcases, Willis has been to 40 of 50 states. For kicking, he has traveled to many places, including Yale, Iowa State, Southern Methodist, North Texas Chicago, Dallas and Florida. He attended the University of Missouri camp in late July.

Many of the camps are through the prestigious Kohl’s Professional Kicking Camps. In the 2017 Kohl’s Midwest Winter Showcase, Willis ranked fifth in kickoffs. His Hudl video shows multiple SME kickoffs booming out of the end zone. Willis has met friends from all over the country and often sees the same specialists at Kohl’s. He listed kickers from Michigan and Kentucky as two of his good friends.

“That’s been really fun to see them at all these camps,” he said.

This season, Fred Bouchard, a three-decade veteran with five Missouri state titles, is the new Lancer head coach. Willis has set goals to win state and “have fun as seniors.” His goal is to kick at the Division I level, a path that should help positively in the future.

“Married with a great family,” Willis said of 10-year goals. “With a good job through the college degree I will have gotten through playing football.”

"He's got a big-time leg and definitely has Division I talent. It's one thing to kick a 45-50 yard field goal in practice, but he kicked a 56-yarder in a game. He's also very accurate in his PATs. There aren't always a ton of opportunities to kick a long field goal either, especially for a team with a dominating offense the last several years. Hopefully he can get a shot at a state record this year. The kickers in Kansas this year are solid and we have them all the way from 8-man to 6A. Parker also gets it done in the classroom with a 4.0 GPA, so he's much more than just a kicker a school is getting. They will be a getting a high quaility student athlete. East has some solid pieces back and bring in a long-time successful coach in Missouri. Should be an exciting season.I also have to give a big shoutout to Coach Delaney for making this program a 6A power out of nowhere in a short amount of time and leaving it as one."

I started kicking freshman year. I played soccer and the football coach asked if any soccer guys wanted to

be the kicker, so I went out for it and made the team.

To win the state title and have fun as seniors

Yeah we have a lot of good guys this year

The fact that not many teams have good kickers, and a good kicker is valuable

It’s amazing, our student section is always big and crazy, and it’s just such an awesome atmosphere for

We have a really high powered offense and score a lot of points. I think we averaged somewhere around

Just the team aspect of it. Our team is great and we have a lot of fun together, and it’s just a great big

We just got a new coach this year, Coach Bouchard. He’s great, he’s been coaching for over 30 years so

he’s got lots of experience and wisdom, he’s a great coach.

Just gave a lot of effort in the weight room and during practices throughout the whole summer.

D1 interest, I don’t know where I’ll get to go yet but hopefully somewhere good.

Play guitar with my really good friends, one of the guys has a lot of instruments at his house so we go

over there and have lots of fun with all of his stuff.

Married with a great family, with a good job through the college degree I will have gotten through playing football.

My grandma. She’s one of the wisest people I know, and she always pushes me to be stronger in my faith

and a better man.

Either Char Bar or Q39, both amazing BBQ places in Kansas City.

My faith is a really big part of my life and football. I’m really involved with my youth group at my church

and Klife, which is another group similar to youth group. All my best friends are in these groups and

we’re all really close, and the leaders have been a really big part of my life, leading and guiding all of us