v Sports in Kansas: 25 Offensive Lineman to Watch for 2018 - Sports in Kansas 
Warning: include(../includes/bodytag.php): failed to open stream: No such file or directory in /home/kansass/public_html/ks/news/index.php on line 36

Sports in Kansas: 25 Offensive Lineman to Watch for 2018

Joe Michalski of Aquinas is one of the states top returning players. (Photo: Susan Goodwyn) 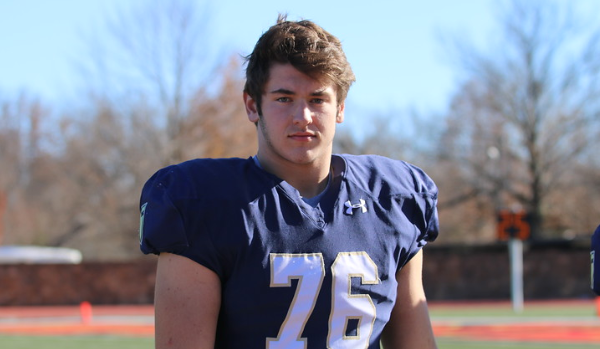 Several offensive lineman return after having big seasons in 2017. Check out who to watch in 2018. This lists main purpose is to represent the entire state from every class. Stay tuned over the next few weeks as we will do this position by position. Chet Kuplen, Managing Partner of Sports in Kansas, and Ben Mitchum, Sports in Kansas contributor, compile lists and evaluate players every year for every position which help compile this finalized list. This is not a recruiting list or prospect list and players are not ranked or in any special order.This list is powered by Rack Performance and Nex-Tech Wireless. Be on the lookout for our postseason honors after the 2018 season on who will be the Top 100 seniors in Kansas and who will make the Sports in Kansas All Non-Senior Team. If you ever have a player that you think we should take a look at be sure to DM @sportsinkansas or sportsinkansas@gmail.com

Chairez is one of the strongest players in Kansas. He earned first team honors as a non-senior from Sports in Kansas in 2017 as a sophomore.

Corocoran has double digit FBS offers. We saw him at a camp this spring and he for sure passes the eye test. He could wind up being the most heavily recruited offensive lineman we’ve had in a while. Free State returns quite the loaded cast of players for the 2018 season. Could they be the favorite on the West to reach the 6A title game?

Beebe, a Kansas State commit, is a big bodied athlete that can move. He’s also a very explosive shot put thrower but his future may be best on the defensive line where he has been one of the best in 4A over the last two seasons.

Michalski, an Oklahoma State commit, is a two-time Sports in Kansas Non-Senior pick over the last two seasons. He is primed for a big senior season along with Jaeden Roberts, a sophomore to be this year, who also makes the list. Roberts has already picked up offers from Nebraska and Missouri. He could wind up being the most recruited 2021 in Kansas by the time it’s all said and done. These two will look to be road graders as the Saints are still looking for their first ever state title.

Nisly isn’t afraid of contact. He looks more like a linebacker delivering blows at the next level than an offensive lineman. He will be one of the better small town lineman in the state for 2018. He has an explosion off the ball and could generate some interest with his size and explosiveness.

Carroll always features talent on the offensive line and has perhaps been the best program in Kansas over the last 10 years. Carroll is going for their fourth state title since 2012 this season but must replace several key pieces from 2017. He can get to the next level and looked good at both left and right tackle protecting Braden Howell in 2017.

Falley didn’t allow a sack last season for the Campus Colts, who were a team on the rise in 2017. They return key pieces for 2018 and Falley has been a huge part as a four-year starter in the rebuild of this program under Greg Slade. He’s a sleeper prospect in 2019 at OL.

He certainly has the size and frame that college recruiters are drooling over and it’s help land him some Division II offers in the off-season, including power Northwest Missouri. He could emerge as a Division I prospect by the time his 2018 season is done.

Kalny was one of the very few sophomores honored on the honorable mention list from the EKL last year. To get on any EKL list is quite the feat when you have the best talent in the state. Kalny could develop into an offer kid with his size. He will need to work on his feet and speed to develop but can play the center, guard and tackle positions.  He has a 32 ACT and a 4.2 GPA.

Pauls bursted onto the scene this off-season picking up FBS offers. He should pair with Myles Livingtson as two of the better lineman in 5A this season. Livingston also has a couple FBS PWO offers and will be a force on the defensive side. Emporia has certainly had its fair share of talent on the line over the last couple of seasons.

Beyer may be one of the more underrated lineman in the state and is a returning first team All AVTCL IV pick. He returns with Drew Ellis who should both be two of the better players in 4A this fall. Mulvane loses Jayden Price who is now playing at North Dakota State.

Our 8-man combo pick here. Washington is one of the biggest players in Kansas. He may be a project at the next level but is much more athletic than one may think. He is a sleeper prospect in 2019 and helped lead Hoxie to the 8M-I state title in 2017. You would think Schroeder is the biggest player in 8-man, well he’s not because of Washington at Hoxie. He’s a project at the next level but has developed nicely this spring and summer at camps and combines. He’s worth a look for his size alone.

A loaded cast return at Miege, so this is a combo pick for one of the 25 spots. Meurer was a first team Sports in Kansas Non-Senior pick last fall. Miege is loaded at just about every position. It is unknown yet who the quarterback will be, but whoever it is will have an experienced group in front of them including Meurer. Both Tylor and Taylor Poitier were honorable mention All-EKL picks a year ago, which only two players were honored in first or second team on the line that weren’t seniors (Joe Michalski – Aquinas and Muerer). Three of the five guys return on the line that was perhaps the best pass protection in Kansas in 2017. They lose all-state selection Jack Burns to FCS program, Cornell and 2020 OL Wyett Wallingford transferred to Platte County (Mo.) that started at offensive guard last season. Tom O’Connor was a key reserve last year and is expected to be a key lineman in 2018.

We have a 1A combo pick. Van Dorn will be one of the top small class lineman this fall for the 1A Panthers. He was a second team Sports in Kansas Non-Senior pick last season. Bolinger will be one of the top returnees in the Southeast Kansas area and was a first team 2-1A pick last year. Although he won’t be a prospect because of size, he had a breakout year for first year head coach Shawn Seematter and will be depended upon heavily in 2018. Both should be the top two lineman returning in the 1A classification. They also will get to face each other in the regular season.

He was a first team all league selection last year for the Orioles. He features great size and could be a breakthrough lineman in the state this season.

Maize South has a couple of big boys who return for the 2018 season. Yocum was a second team all league pick a season ago in a very loaded league. Fayette impressed at camps and combine this spring to put his name on the map as a potential 2020 lineman to watch.

A loaded cast of players return, so Duncan & Wheeler will need to have a big year to block for the likes of Breece Hall, an Iowa State commit, that is a returning All Non-Senior pick from Sports in Kansas. Wichita Northwest has been loaded with talent and recruits over the last few seasons. Wheeler was a first team All City League selection. He won’t pass the eye test as a recruit but he’s one of those very good and tough high school lineman.

Strahm is more known as a defensive tackle, last years 3A Defensive Player of the Year from Sports in Kansas but he will again be counted on the offensive line for the 3A defending state champion Bluejays. Strahm should be a man among boys in this classification in 2018 and was also last years 3-2-1A state heavyweight wrestling champion. Sabetha will have some new teams to get used to in the new 3A however the Bluejays were a 4A school in the 90s.

Wampler was a first team 4A-II selection last season for the Vikings. He should be one of the better two-way lineman in the lower classifications in 2018. Smoky Valley, now a 3A school, should feature a standout athlete on both sides of the ball in speedster Tim Lambert.

Habbart is one of the best lineman to play for Coach Marinelli. He was a first team All Non-Senior pick last season for the Tigers. He should be one of the top lineman in the metro of Wichita in 2018.

Kerr should be one of the top lineman in the Topeka area and really shined at offensive tackle last season for the Vikings on the way to earning all-state honorable mention honors.

A trio of players from the Blue Valley schools make it as a pick from three different high schools. Tschirart still has some developing to do with strength but this athletic and lengthy lineman has a lot of potential. Blue Valley has a lot of key returnees back with a lot of young players getting experience in 2017. He currently has offers from Kent State at the FBS level and Indiana State at the FCS level. We don’t expect it to end there either. Murphy was one of the better junior centers in the state last year. He showed the ability to both be a dominating run blocker and pass blocker in both shotgun and under-center formations. Southwest does have some nice pieces back and Murphy will get his shot at some of the best defensive lineman in the state every week. Stallard is the top returning lineman for the defending 6A state champion Mustangs. They lost some key talent but they do return the best quarterback in Kansas. Stallard will look to anchor a group to protect Wisconsin QB commit Graham Mertz, last years 6A Sports in Kansas Player of the Year. Stallard was an honorable mention pick in the Eastern Kansas League last season, one of the very few juniors on the list at lineman.

Panzer, Helms, and Marks represent the 2A picks on the 25 to Watch list as a pick. Panzer is a big bodied 2020 lineman that should have a breakout year in the classification as he continues to develop into a prospect, Logan Gugelmeyer also returns for Lakin at 6’3” 245, so they will have some size.. Helms had a solid junior year in which he earned 3A all-state first team honors in 2017. Marks is pound for pound one of the strongest players in the state and will be one of the top defensive players in the class.

Johnson is a big bodied offensive lineman that is one of the biggest players in the state. He moves pretty well for a guy that is 340 pounds. He was a pancake machine and may be a project at the next level but with a big year could put himself on the map.