v Faces in KS: Elliott Strahm - Sports in Kansas 
Warning: include(../includes/bodytag.php): failed to open stream: No such file or directory in /home/kansass/public_html/ks/news/index.php on line 36 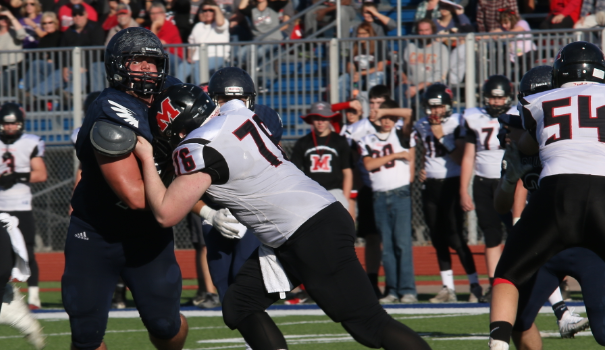 Sabetha coach Garrett Michael still recalls a play from the Bluejays’ 17-14 win against Silver Lake in the Class 3A semifinals. Sabetha junior nose guard Elliott Strahm did not earn a tackle, but it allowed Sabetha’s defense to make a key stop.

“He just took their center and basically drove him three or four yards deep, dove over the top of him and just about grabbed the running back, and by that time, our other guys were there,” Michael said.

Strahm’s penetration was indicative of his 2017 season, his third as a starter. Strahm finished the year with 64 tackles, sixth-best for a team that finished 13-1 and won the state championship, the third in school annals and first in 20 years. He had 3.5 sacks and two fumble recoveries.

But his impact went well beyond statistics for a defense that forced 36 turnovers, finished plus-26 in turnover margin and permitted 9.7 points per game. The Bluejays ranked second in 3A in scoring defense, just behind Conway Springs (9.6) in the 64-team classification. A starter on the offensive line, Strahm helped Sabetha average 38 points a game.

Strahm said Sabetha’s defensive linemen are sacrificed in the Bluejays’ defense, a tactic Michael agreed with. Strahm often cramped during the season as he took on double and triple teams.

“Our defensive linemen’s job is to stay on the line of scrimmage, and keep their linemen off of our backers and safeties so that they can make plays,” Michael said. “Our coaching staff and our team, we always talk about that, and the defensive linemen – they take great pride in what they do.”

Silver Lake averaged just 3.2 yards per carry and finished 18 of 36 for 183 yards with a 0/3 TD/INT ratio against Sabetha’s defense. In the championship, Sabetha’s defense rose to the occasion multiple times against Marysville, especially in the red zone.

Sabetha led 7-6 into the final minutes when Marysville mounted a drive. Strahm was nervous but enjoyed the “biggest feeling of relief” in his life when Sabetha’s Gabe Garber intercepted Marysville just in front of the goal line to secure the win.

Strahm collected Sports In Kansas 3A Defensive Player of the Year honors. He earned all-state on the defensive line from the Topeka Capital-Journal and offensive line recognition from the Wichita Eagle.

“Probably one of the best feelings I’ve had in my life up to that point,” Strahm said of the crown.

On the way home, Sabetha endured tremendous tragedy when Tanner and Carson Ukele lost several members of their family in a car wreck. Michael had to inform the Ukeles on the team bus. The Ukeles’ mother, sister and uncle passed away and the accident seriously injured their father.

Sabetha eventually enjoyed a tremendous school year in all sports. Strahm won the Class 3-2-1A 285-pound state championship over Smith Center’s Avery Hawkins. The previous season, Strahm lost by fall to Hawkins in the first round at state.

On May 27, the official Sabetha Bluejays Twitter account sent out a tweet calling ’17-18 “year to remember” with hashtags that included #titletown, #historymade and #ukelestrong. The Sabetha senior football players designed their ring to memorialize the Ukeles.

“Something very impressive and not done every year,” Strahm said of the achievements.

Even more than the state titles, Strahm enjoyed the time with his teammates and most remembered having fun on the trips. The personality extends to the classroom.

“He’s just always happy, always got a smile on his face, he’s always got a good attitude,” Michael said. “Good work ethic, but when the lights turn on, and you’re an opponent, he doesn’t treat you real well. And so the competitive spirit comes out in him, and he’s just a total competitor for the whole game, and he doesn’t play down to his competition. He probably rises to the occasion more than not.”

This season, Sabetha returns seven starters on both sides of the ball in its run-heavy offense. Last year, Sabetha set a state record for most carries in a game (81) in a playoff win against Osage City and delivered 325 rushing yards a contest.

The Bluejays return an experienced group, including senior running backs Joe Gruber and Mason Engelken (combined 2,180 rushing yards) and the top-two tacklers in Garber and Cauy Rokey (229 combined stops). Junior Carson Ukele is back on the line.

“To make it far in the playoffs, do it the right way and ultimately win another title,” Strahm said of the team goals.

This feature is presented by SBS Insurance Agency. Proud to support the Sabetha Bluejays, the 2017 3A State Football Champion!

The Sabetha community is very proud of Elliott Strahm for being chosen by Sports in Kansas as a featured 2018 Preseason All-State Football player to watch. It's an honor for Community National Bank to help sponsor such a fine young man and very gifted athlete. Congratulations Elliott!

Chet Kuplen, Managing Partner of Sports in Kansas, on Strahm

"He's a multiple sport kid that is a freak in the weight room. He was a beast on the field in 2017 and we thought he was the most dominant defensive player in 3A last season and was a game changer, why we decided on giving him 3A Defensive Player of the Year. I wouldn't be surprised if the D1's want him as a preferred walk on soon in this state if they don't already. I may be biased to our Kansas high school kids, but I think he can play at that level even if he has to walk-on. He seems to fit the mold of a small town Kansas kid slept on that can play at that level, the good thing is we have a program in our state that allows that to happen with Kansas State and KU is getting better about providing that opportunity lately. Will Geary was in a similar spot to him in high school six years ago with the D2's all over him but only walk on D1 offers. That may have been because of height, but Will ended up being a three time All Big 12 selection and one of the best defensive lineman in KSU history. Don't like comparing the two but both were wrestlers as well and Elliott is a couple inches taller. Elliott will surprise a lot of people if given the right opportunity. He's big, he's strong, he's athletic and he's a state champion wrestler, that's all you need to know about what type of competitor he is. I hope someone gives him a shot at the highest level but if they don't he's going to be a force in the MIAA or for a Kansas juco that could develop into a prospect. He would have no problem dominating at any high school level in Kansas"

To make it far in the play-offs, do it the right way and ultimately win another title.

I can pick up multiple blocks at a time allowing for our linebackers the freedom to make plays, I can also make plays while picking up blocks.

Awesome, the stands are usually full and the crowd is always into the game.  We get great amount of support from the community.

We play great football, it’s a welcoming atmosphere and the coaches treat and respect the players in a great way that you don’t always see.

The camaradarie with the team and the competitive aspect of the game.

I wrestle and do track & field.  I’ve qualified for state wrestling and state track twice in each sport.  I won the 2018  3-2-1A Heavyweight State Championship.

It’s a blessing, Coach Michael cares deeply about all of the guys on the team, which goes for the other coaches as well. Coach Michael is always helping make us better men while making us better athletes at the same time.

We have been working out 4 days a week all summer and have been having practices several days a week.  We also get together in our free time to work out on the field without the coaches.

I am getting interests from multiple D-2 college programs at the moment and I am planning on playing college football.

Riding horse and being outside.

Done with college and have it paid off.  Living on my own with thoughts of starting a family.

Government; a good self-disciplined student.  I work hard in the classroom like I do on the football field. GPA is 3.9.

My Grandpa Dale.  He lived a life that I want to be able to live.  He loved and respected everybody and he genuinely wanted the best for everybody all of the time.

I enjoy reading a good book and I can wiggle my ears.