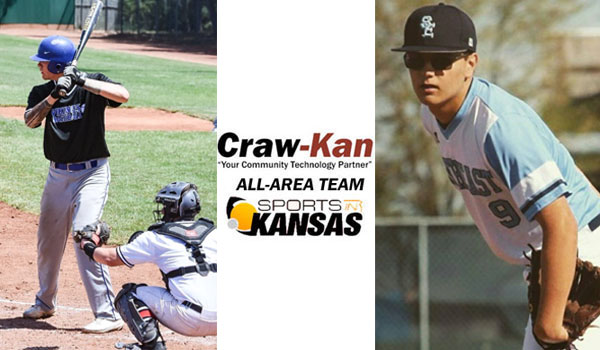 Sports in Kansas has released its annual Craw-Kan All-Area Baseball Team recognizing top players from the CNC, SEK, TRL leagues. Only those three leagues are eligible on the Craw-Kan team.

Wolgamott, a junior first baseman, led the entire state of Kansas in batting average this season and was 15th in the nation according to MaxPreps national list. He has been a huge part of the resurgence of baseball at Parsons HS as they took third in 4A-II this season under head coach Gerald Beardmore. Wolgamott hit .636 this season with 49 hits in 77 at-bats. He had nine doubles, five triples, two homers and 25 RBI in a loaded Parsons lineup. Only a junior, he has already earned two all-state selections, honorable mention last year and first team all-state this year to go along with his player of the year honor in 4A-II from Sports in Kansas.

Peacock has won back-to-back regional championships on the mound for the Lancers. He is the only player in Southeast history to ever win the regional championship on the mound and he’s did it over his sophomore and junior years with one left to play. Peacock, a first team all-state selection in 3A, was outstanding in 2018 with a 7-0 record with 65 strikeouts in 45.1 innings pitched with a 0.92 ERA. Southeast has made the state tournament in each of the last two seasons, it’s only two trips in school history. They lost in the first round this season to eventual state champion Sabetha and took fourth place last year.

Beardmore led the Vikings to the state tournament for the first time in 10 years. Parsons, a traditional baseball town way back, seems to be on the right track to getting back to that. With a young cast of players the Vikings took third place in 4A-II in 2018.