v Faces in KS: Gage Girk - Sports in Kansas 
Warning: include(../includes/bodytag.php): failed to open stream: No such file or directory in /home/kansass/public_html/ks/news/index.php on line 36

Gage Girk is one of the rising star kickers in Kansas and will only be a junior. 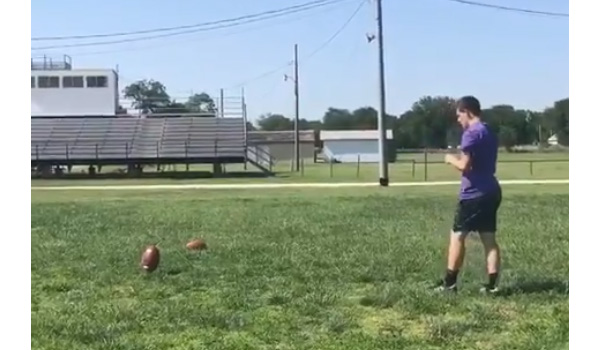 Coldwater-South Central junior Gage Girk is eight-man football’s best kicker – and can make a strong case for Kansas’ best specialist, regardless of classification. Last fall as a sophomore, Girk converted 17 of 25 extra points and 3 of 4 field goals.

His three field goals came from 45, 46 and 44 yards for the Timberwolves. Additionally, Girk started at cornerback and picked off five passes for SC’s second straight 9-2 season.

South Central, the consolidation of Protection and Coldwater, played eventual state champion Hoxie close in the second round of the Eight-Man, Division I playoffs.

Girk tied for fourth nationally among eight-man kickers in field goals made, according to MaxPreps’ statistical lists. His 46-yarder, which came Sept. 29 in a key 23-16 district win versus Macksville, marked the nation’s longest field goal for eight-man players.

Among Kansas 11-man players, Andover Central’s Clark Schoonover, who has graduated, was the only one to kick a longer field goal than Girk when he made a 49-yarder.

”Everyone was just really excited, something you don’t see all the time,” Girk said.

Girk earned first team all-state eight-man kicking honors. He has attended camps at Oklahoma State and Kansas State and would like to kick at the Division I level. In practice, Girk has made two from 62 yards and was just short from 68.

The 5-foot-9, 155 pounder started kicking in his front yard around three to four years old. In the youth ranks, he started following Tim Tebow during his All-American career at the University of Florida. Tebow still remains Girk’s role model.

“He wore the Bible verses underneath his eyes,” Girk said. “I thought that was just really cool, and so in pee-wee, I would do that, and he’s always just been someone I’ve looked up to and tried to be like.”

In junior high, Girk played six-man football and kicked one field goal versus Pawnee Heights. Girk will often head down the street to the field and kick for several hours.

Entering Girk’s freshman year, Billy Nichols took over as head coach after Matt Smith went to Atwood-Rawlins County. Girk started to kick on the field after a summer camp concluded.

Nichols, who came from Oklahoma, was impressed with Girk’s leg and said the T-Wolves might have to try some field goals. In 2016, Girk went 12 of 19 on extra points and made his only field goal, a 22-yarder against Ingalls.

Last year, Girk received his first chance in Week 2 against Minneola when he connected from 45 yards. Nichols called a timeout and asked Girk if he could make it. Girk believed he could.

“The first one was into about an 18-mile-an-hour wind, and I just barely made it from 45 yards,” he said.

After the 46-yarder versus Macksville, Girk connected on a 44-yarder in a win versus Argonia-Attica in Week 9 that helped SC capture the district title. The T-Wolves have made the playoffs five straight years.

In 2017, SC finished third in eight-man with just 9.3 points permitted. The T-Wolves forced 31 turnovers and finished plus-20 in turnover margin. This season, Girk will play multiple roles, including kicker, punter, return specialist, wide receiver and cornerback for a team that returns three offensive and four defensive starters.

Chet Kuplen of Sports in Kansas on Girk

We first became aware of him after his 46 yard field goal was sent into us last fall in a text message that we then put out and it went viral on social media. I think between Facebook, Instagram and Twitter, his video has over 60K views. It kind of put him on the map from a small town 8-man program that not a lot of people knew about to people knowing about him and who he is around the state. Programs, including Division I schools, had inquired about him through our twitter messages and wanted to see him at camps which he has been going to this summer, so it definitely reached some of the right people to showcase his talents. Not only did heput himself on the map with his leg last fall as a kicker but some of the punting videos we saw were outstanding as well, so he could really figure into a program to do both or any of the two if needed. Some 4A/3A programs in Kansas are lucky to have a kicker and you don't see many 8-man programs kicking a lot so this was awesome to see. We are looking for some big kicks this fall and hopefully a college will give this small town kid a shot. Sports in Kansas exists to make sure kids like this don't go unnoticed. Also... it's pretty scary that he's got two years left and already doing big kicks like this!!

I want to make a deep run in the playoffs, make it to the state championship and maybe win it, just build upon what we had last year

I feel like we are one of the best teams in the state. We only lost about four people offense and defense, so most of our key players are returning.

I can make tackles, I am pretty fast.

Football is a pretty big thing around here. We expect to make the playoffs, and everyone comes out and supports, especially around playoff time, more people come out.

It’s a great time. Not many teams kick in eight-man, so that’s something.

Running back Eli Jellison, senior running back and linebacker Ethan Jellison, (three-year starting QB) Chayde Snyder, and a few freshman that I think will come in and  play quite a bit. (Lineman) Andrew Erickson.

It’s different from any other coach you will ever play for. Puts in random stuff. He will change the offense the day before the game if he feels like that’s going to help us.

We went to Shattuck, Okla. two weeks ago for their team camp for three days and then we are lifting weights every morning at 5:45 to about 7, running and lifting.

“I am hoping I can go to a Division I, either Oklahoma State or K-State would be in my top picks, but really anyone I would be OK with.

I like to hang out with my friends, and talk with family, work with my dad.

Either still playing football somewhere, coaching, being a sports trainer or physical therapist, something still in sports somewhere.

My GPA is 3.75 and my favorite subjects are probably english and history.

My role model is Tim Tebow. He’s a great person. … He wore the Bible verses underneath his eyes. I thought that was just really cool, and so in Pee-Wee, I would do that, and he’s always just been someone I’ve looked up to and tried to be like.”

Most people don’t know that I am actually diabetic. It doesn’t really change me that much. I just have to watch my blood sugar.