v 2018 Sports in Kansas 3A All-State Baseball Team - Sports in Kansas 
Warning: include(../includes/bodytag.php): failed to open stream: No such file or directory in /home/kansass/public_html/ks/news/index.php on line 36 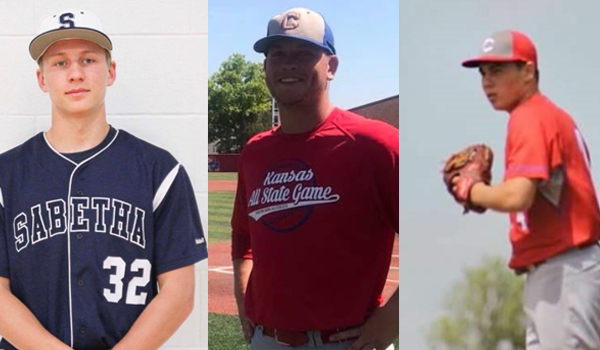 Sports in Kansas 3A Baseball Co-Player of the Year

Garber helped the Bluejays to the 3A state title as a sophomore outfielder with a .552 average with 48 hits, just six off the single season state record. He also scored 40 times, had 34 RBI. In addition to Sports in Kansas 3A Player of the Year and 3A All-State he was also 1st Team All Big 7 as a sophomore this spring. Garber was lights out in the state tournament going 8-of-11 with nine RBI. Garber also sealed the deal this fall for the football team as he picked off a Marysville pass on the one-yard line in the state championship, giving the Bluejays their first state football title since 1997. Look for a bright future for the Sabetha sophomore in multiple sports over the next two seasons.

The entire Sabetha community is proud of our 3A State Champion Bluejay Baseball Team and Gabe Garber on being named the Kansas 3A Baseball Player of the Year from Sports in Kansas. It is an honor for Community National Bank to help sponsor such a fine young man and very gifted athlete. Congratulations G$!

Congrats to Gabe Garber, on being voted Player of the Year, and all the Sabetha Bluejays on their amazing year in athletics! We are very proud of all your accomplishments and hard work. Keep it up and go Bluejays! Keim, TS, Inc. is proud to support Sabetha High School Athletics! Keim TS - Over 60 Years of Trucking. We Make It Happen. Visit us online at keimts.com

Grover was one of the top 3A multiple sport athletes in the state this season, also earning all state honors as a quarterback in football this past fall. Grover hit .514 with 42 RBI while only striking out three times all season in leading his team to the 3A state tournament. Cheney (20-4) lost in the first round to Marion. It’s only the third year of the program and Grover is a big reason why the Cards have put this program on the map in recent time.

Sports in Kansas 3A Pitcher of the Year

Kaminska was as dominating as anyone on the mound this season as he struck out 82 batters in 35.1 IP while only allowing two earned runs on the way to a 5-0 record (0.40 ERA) for the Bullpups. Only four runs scored in his 35.1 innings on the mound, two of which were unearned. He was equally as good as a hitter as he hit .467 with 25 RBI, 14 doubles two homers and had 10 stolen bases. Kaminska is one of the rising young players in Kansas as he has two full seasons left to play high school baseball at Caney Valley where he plays for his father, Mike. Kaminska was also a Perfect Game Honorable Mention Underclass All-American this season.

Proud of You Jace! Love You – All the Kaminska Family

Frey led Sabetha to the 3A state baseball title with a 23-3 record on the season. The Bluejays knocked off Cherokee-Southeast, 12-4, in the opening round before defeating Marion, 9-4, in the semis, then went on to capture the 3A title over TMP, 10-5, all at Tointon Family Stadium in Manhattan. It was quite the year in Sabetha as the football team won the 3A state title last November, while the golf and baseball teams also captured state titles this May.

Rainbow Communications would like to congratulate the Bluejays on an outstanding season in 2018.

Sports in Kansas 3A All-State Baseball