v 2018 Sports in Kansas 4A-I All-State Baseball Team - Sports in Kansas 
Warning: include(../includes/bodytag.php): failed to open stream: No such file or directory in /home/kansass/public_html/ks/news/index.php on line 36 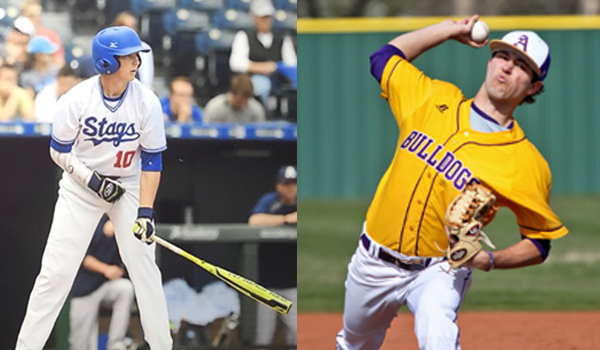 Sports in Kansas 4A-I Player of the Year

The senior infielder will go down as one of the best multiple sport athletes in Kansas history. Although he may be more known as a high school quarterback that rewrote all the football record books in Kansas, his best sport at the next level is baseball and that’s what he will do at Notre Dame next school year. The senior, who has been committed to the Irish since his sophomore year, led the Stags to a 4A-I state runner-up finish and hit .460 in arguable the states best league (EKL). Putz had 40 hits over 25 games that included six doubles, four triples, three homers and 23 RBI.

Sports in Kansas 4A-I Pitcher of the Year

O’Toole was one of the most dominant pitchers in the state and led his team to capturing the 4A-I state championship this season. O’Toole has been an immediate impact player for the Bulldogs since his arrival as a freshman garnering all league four seasons in a row. He was also the player who scored the buzzer beater to beat Andover Central this March in the 4A-I 3rd place game and a second team all-league receiver in football this fall. Where he shines is on the mound as he struck out 65 batters in 51.1 innings pitched with a 0.41 ERA to go along with a 6-1 record. Not only did he get it done on the mond, he also hit .356 this season and boasts 3.91 GPA in the classroom

Congratulations Hunter O’Toole on the 4A-I Pitcher of the Year and the Arkansas City High School Baseball Team on the 2018 4A-I State Championship! ACHS Booster Club is proud to support the Bulldogs!

Sports in Kansas 4A-I Coach of the Year

The Bulldogs won the 4A-I state title in run-rule fashion over Bishop Miege (11-1) in Emporia for their first state title since 2002. It was also their first trip to the state tournament since 2006. Two years ago Ark City had just three wins and have been paired in regionals with state powers even when they were up in 5A. It was a task just to get out of the regionals but once they did this year the Bulldogs won three games at the state tourney. They blasted Independence (10-0) by run-rule in round one, before going to extra innings with a familiar league foe in Andover Central (1-0) in the semis, before the 11-1 run-rule over Miege in the title game. What a year it has been for Ark City in boys sports.

Congratulations to the Arkansas City High School Baseball Team and Coach Bucher on the 2018 4A-I State Championship! ACHS Booster Club is proud to support the Bulldogs!