v 2018 Sports in Kansas 2-1A All-State Baseball Team - Sports in Kansas 
Warning: include(../includes/bodytag.php): failed to open stream: No such file or directory in /home/kansass/public_html/ks/news/index.php on line 36 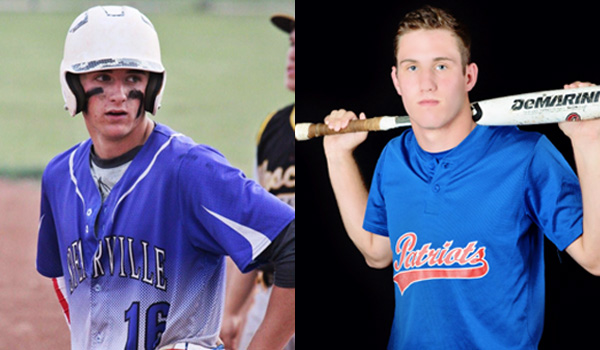 IF YOU MADE THIS LIST BELOW ORDER YOUR SPORTS IN KANSAS ALL-STATE BASEBALL PATCH - FIRST OR SECOND TEAM, PLAYER OF THE YEAR, OR HONORABLE MENTION ASAP BY EMAILING: sportsinkansas@gmail.com

Sports in Kansas 2-1A Baseball Player of the Year

Fisher, who hits in the two hole, helped the Lancers to their first ever state championship in baseball and did so with seven homers and 32 RBI with a team leading .509 batting average. The senior shortstop and pitcher had 30 hits over the regular season in just 20 games and only struck out six times all season for the 2-1A champs. His seven home runs were the most in Kansas this season.  Fisher was also 6-1 on the mound this season. His biggest game came in the state championship where he has two triples and a single on the way to four RBIs to capture the 2-1A state title over Colgan.

Alliance AG & Grain is a proud supporter of Spearville Athletics. Congrats to Alex and the 2018 Spearville Baseball Team on their postseason honors from Sports in Kansas!

Sports in Kansas 2-1A Pitcher of the Year

Miller struck out 65 batters in 50 innings pitching this season with a 1.68 ERA. He had a 10-2 record on the mound for the Patriots this season. In addition to that he also hit .455 this season and only struck out one time. Miller has now been all-state this season in football, basketball and baseball. He was part of the best annual year for West Elk in their boy’s sports history which included a top four finish at state basketball in March.

Simply Trends would like to congratulate Cade Miller on the 2-1A Pitcher of the Year with Sports in Kansas. Congrats to the Patriots on an outstanding season!

Sports in Kansas 2-1A Baseball Coach of the Year

Strain led the Lancers to their first ever state title in baseball in 2018. They beat traditional state power St. Mary’s Colgan 13-12 in the title game in Great Bend. Spearville finished the year with a 21-3 record.

J-A-G Construction would like to congratulate the Lancers on the 2-1A state title!

Alliance AG & Grain is a proud supporter of Spearville Athletics. Congrats the 2018 Spearville Baseball Team on their postseason honors from Sports in Kansas!

Sports in Kansas 2-1A All-State Baseball