v Faces in KS: Dana Baker - Sports in Kansas 
Warning: include(../includes/bodytag.php): failed to open stream: No such file or directory in /home/kansass/public_html/ks/news/index.php on line 36 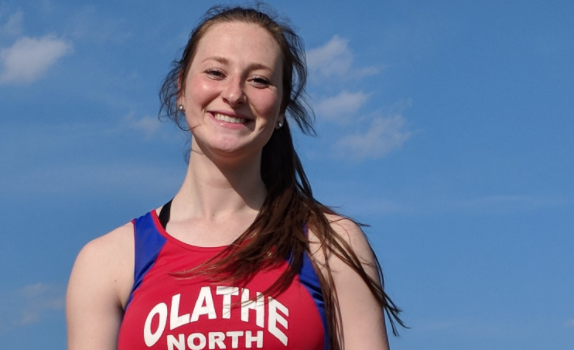 Olathe North High School, a 6A high school in the Kansas City metro home to the Eagles, has the top girls high school javelin thrower in the United States this season in senior Dana Baker.

Baker has been involved with sports since age five but javelin is something that is sort of new to her as she just started throwing three years ago as a freshman in high school. She grew up with volleyball being her main sport, a sport where she was a four year starter, all-conference, and all-state athlete for the Eagles. She decided back in 2015 to give the stick a try as a freshman.

"I had never been a one sport athlete as I grew up playing alot of sports so I decided I wanted to throw the javelin in high school in addition to volleyball as a freshman. I ended up making the team and taking seventh at the state meet as a freshman." Baker

Little did everyone know that the seventh place finisher as a freshman would become one of the best in Kansas history. Baker's toss of 171-05 this season ranks all-time number two in the state of Kansas, only behind that of Kendra Wecker of Marysville in 2001 (174-06). Wecker was a multiple sport star who went on to be an All-American basketball player at Kansas State and a first round draft pick in the WNBA.  Baker currently ranks #1 in the country with her throw of 171-05. In fact, her throw is nearly 14 feet better than any other competitor in the country at this point.

"It's very humbling having the best throw in the nation. There are so many great athletes, so to be considered one is very rewarding." Baker said.

Baker has won two state javelin titles in high school so far, coming her sophomore and junor years, with her senior state meet remaining. Although she may be the nations best in the javelin, she is also a very good shot put and discus thrower in the state of Kansas. She has a 127-06 mark in the discus, which is a school record, while also carrying a 38-03 best in the shot. She took sixth last year in the state discus. Baker will throw next season at Duke University.

"The recruiting process was stressful. This was one of the first really important decisions I have had to make for myself. Everyone I met along the way was so welcoming in the process though and had amazing programs, but I am excited to see what the future holds for me at Duke." Baker said.

Baker has her goals set on a 180-foot mark this year. She didn't get to try for that last week as weather shortened her meet and she only got one throw in. She will get to go for that feat and a new Kansas state record this Friday at the prestigous KU Relays at Rock Chalk Park in Lawrence on Friday. We caught up with the outstanding senior javelin thrower in the latest Q&A edition of Faces in Kansas below.

How did you get involved with sports or throwing?

I started getting involved in sports at age five, starting with basketball and softball.  I played both of these sports until the age of 12 when I decided to try volleyball.  I really enjoyed it so I began to play competitive.  Once I did this, volleyball became my main sport. I had never been a one sport athlete before so when I became a freshman in high school, I wanted to try throwing the javelin for the high school track and field team.  I made the team and began to show improvement.  I ended up qualifying for the State track meet in Wichita and placed 7th.  I’ve been throwing since then.

I would like reach 180 feet this season but my expectation is to continue to work hard and become the best I can be.  My goal is to qualify for the State track meet again this year and make a run at the 6A state meet record.

I’ve had a great high school experience at Olathe North. Everyone is really supportive and it’s a big family

Top throw in the nation, what does that mean to you and how awesome is that?

It’s very humbling.  There are so many great athletes and to be considered one of them is very rewarding.  I’ve been blessed and I’m going to work hard to keep improving.

How awesome is Cessna?

I would say one of my main strengths is my ability to remain focused and working hard. I’m really dedicated to producing results and making improvement.  Regarding weaknesses, I have high expectations of myself and when I don’t do as well as I think should have, I become my worst critic.

Take us through what kind of training you go through year-round?

In the off season, my focus has been on increasing my strength.  As I transition into the season, however, I lessen the amount of weights I lift and try to increase my flexibility and just try to maintain my strength.

The recruiting process was stressful.  This was one of the first really important decisions I had to make for myself. I committed to Duke University. Everyone I met along the way was so welcoming and had amazing programs, but I’m excited to see what the future holds for me at Duke.

Our team is very well rounded. We have dominance in all events and I believe we are serious contenders to win state.  I’m really excited to see how we progress throughout the season.

I’ve had three different high school coaches:  Coach Catloth, Coach Hilton and Coach Johnson.  Coach Catloth was my first coach and is the one who really got me interested in the javelin.  All three coaches have given me good instruction and advice though and I’ve enjoyed getting to know them as people as well as a coach.  My personal coach is Joe Wilkerson.  He is very knowledgeable and helpful but he has high expectations and believes if he’s going to invest his time, you better give him your best and I have done my best to do that.

Best thrower you’ve ever faced and who are some key ones this year?

Madison Wiltrout and Skylar Ciccolini both from Pennsylvania.  I will be facing Skylar again this summer.

Do you play any other sports, tell us about that and your accomplishments/goals?

I play volleyball all four years of high school and was a four year starter on varsity.  I made all conference every year, made Honorable mention/third team All State my senior year and was selected to play in the annual Kansas vs. Missouri all-star game.  I also throw the shot put and discus.  I placed 6th at State last year in the discus.

What’s it like to grow up in your town and going to your school?

Olathe is a typical suburban area that isn’t small but has a small town feel.  I can’t say I know everyone but by competing in a lot of sports, I’ve gotten to know a lot of people and they are very supportive of me.

I’m not sure.  I’m hoping my education from Duke will have prepared me for a long successful career somewhere.