v Faces in KS: McKenzie Wilks - Sports in Kansas 
Warning: include(../includes/bodytag.php): failed to open stream: No such file or directory in /home/kansass/public_html/ks/news/index.php on line 36

McKenzie Wilks of Pittsburg picked up two 5A titles as a junior and one as a freshman. 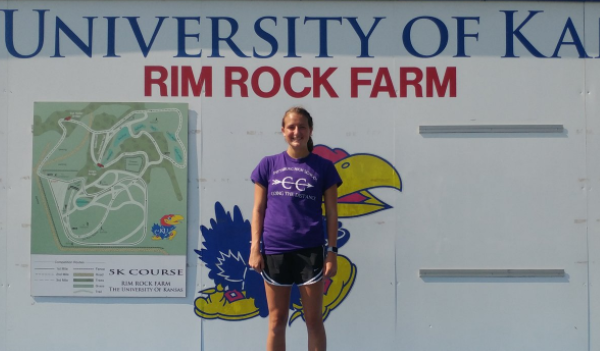 Pittsburg senior McKenzie Wilks was quite the surprise at the state track and field meet back in 2015 as a freshman, coming out of nowhere to win a state title in the 800 meters at Cessna Stadium in Wichita. Quite the feat in your first year of high school and first state meet to win a state individual title. She went from being a freshman that nobody knew, to being interviewed on statewide TV on the finish line immediately after winning the race in an upset of many high-level competitors in Kansas. Now a senior runner for the Purple Dragons, she is one of the state’s top mid-distance runners in all classifications. No longer is Wilks a kept secret to runners across the Sunflower State.

Last season as a junior Wilks doubled up at the state outdoor as she captured two individual state titles on May 27th at the state track and field championships in Wichita. She won the 1600 meters and 800 meters in Class 5A. Wilks has three individual state titles in her career with the 800-meter title as a freshman in 2015. Wilks won the 800 last season at state with a time of 2:19.37 and the 1600 with a time of 5:13.44. Her 800-meter state title finish at the state outdoor last season was remarkable edging the favorite to win in senior Victoria Robinson of Lansing by just .04 seconds in a run-down win from behind. It was one of the best finishes at the 2017 State Oudoor in all classes.Wilks also took ninth in 5A cross country this fall at Rim Rock Farm outside of Lawrence.

Wilks has built quite the high school career at Pittsburg and in 5A with her senior season remaining. Southeast Kansas has been put on the map for mid-distance and distance runners as of recent. Cailie Logue, a 2017 Girard graduate that now runs at Iowa State, went down as arguably the best mid-distance/distance runner of all-time in Kansas history with 13 state titles. And it doesn’t stop there as Southeast Kansas has gained quite the attention and reputation statewide of girl’s distance runners here recently and has been churning out state champions over the last few seasons with the likes of Logue, Wilks, Katren Reinbolt (Fort Scott '14), Kaylee Bogina (NE-Arma '15), and Jenny O'Bryan (St. Paul '16).

Wilks may have only started running competitive track in the seventh grade just five years ago but has seen so much success in the short time period that she has been running. It ultimately landed her a scholarship to run at the University of Kansas next season where she signed earlier this year. She still has some business to take care of before she moves to Lawrence. This season she has her sights on winning more state titles at Cessna Stadium this May as she looks to finish a strong career and senior year. Wilks has goals of running a sub 5-minute mile, her current PR is at 5:09.83 and wants to hit 2:15 in the 800-meter run, her current best is a 2:18. We caught up with the outstanding senior runner below in the latest edition of Faces in Kansas.

This feature is presented by ORIZON Properties, LLC, Quality Residential and Commercial Properties. Give Kyle Battaglia a call at 620-249-8973. ORIZON Properties LLC wishes McKenzie Wilks best of luck over her 2018 Track and Field season. See our ad at the top right corner.

I have been involved in sports ever since I have been old enough to play YMCA basketball and tee-ball.  That since grew into travel teams starting in 2nd grade and it took off from there.  I didn't start running till I was able to compete in middle school track, which at my school is 7th grade.

At my school many people don’t know, or want to, run.  We are a 5A school that can barely fill, or sometimes don’t even, a cross country roster.  In track it is a little better with people coming out but this year I think we only have 18 girls JV-Varsity.  I like my teammates and coaches, I just wish that we were able to get more people out and into running.

Cessna always has an amazing atmosphere, it's awesome just to be able to compete in front of that crowd let alone be blessed enough to win titles.

My strengths and weaknesses are kinda the same thing.  I am perfectionist  that is extremely self driven and I am the hardest person that anyone could be on me but on myself.  This is both a good and bad thing.  Good as in I am very self driven, motivated and determined to work hard and reach my goals.  But it is a bad thing because I am rarely satisfied with myself, and I kinda drive myself crazy sometimes trying to be perfect.

Starting in the summer of every year, about a week after state track I start hitting the roads putting in mileage to build my base backup for cross country season.  Last summer I got up to around 40ish miles weekly.  Then comes cross season and more miles but also some mile, 800m, and hill repeats thrown in the mix.  About a week after cross country season I start training for indoor track.  This is where I really hit it the hardest throughout the year.  My dad is my coach throughout indoor season and we are doing speed work on the track 3 days a week, 2 days mileage, and Saturday long run, averaging around 40-45 miles weekly.  My dads workouts kill me all winter lol.   After indoor season I jump into outdoor season where we do lots of 600m repeats and 300m combos.  I mostly run with the 800m runners but sometimes I do the miler-2milers workout.  I do mostly what my teammates do just with faster times to hit and more reps to do.

What all offers did you have and why did you end up choosing KU?

I was talking to about 10 schools, went on one unofficial (K-State), 3 official visits (Pitt State, Missouri Southern, and KU) and was planning on taking an official to Oklahoma State but it was scheduled for after the first signing period and I knew I wanted so sign early so I didn’t end up taking it.  I only got far enough in the process with the schools that I took officials to and to really talk about the money side of it. They were the ones I got offered by.  I knew I wanted to be within 4-5 hours from home, have a school that’s strong in pre-med, and find a team that is really close with each other and  with a coaching staff that supports their athletes in more than just running and that’s all the things that I saw in KU.  I really fell in love with KU after my official visit.

Other key athletes on our women's team this year are Faith Turner, Laken Robinson and Abbie Casper.  Faith, as I’m sure you already know, is good at just about anything we throw her in.  She racks up big points in long and triple jump, but also kills it with her crazy fast footspeed in the sprints.  Laken should be big for us by the time state rolls around in high jump.  Abbie is the person that I train closest to daily.  She is mostly 800m with some 400m thrown in, and she should, if she is able to stay healthy, place high at state in those events. These girls along with our 4x400m relay consisting of: myself, Faith, Abbie and Susana Canales, should all deeply contribute to a plaque by the time Cessna rolls around. All around I think we are going to surprise some people at the state level.  I don’t think that we even are aware of how strong we are.  Though we lost Taylor Muff, if all goes to plan, we should be able to bring a plaque back to Pittsburg for the 3rd consecutive year.

Coach Ausemus a laid back guy with a deep passion for running and his track and cross country programs.  I attribute my success to him, my dad, my support system and God.

The best runner that I have ever faced is Callie Logue.  This year the key ones depend on the event but one off the top of my head would be Olivia Sovereign of Aquinas.

As of my junior year I turned into a runner year ‘round.  My freshman and sophomore year I played varsity basketball but decided to dedicate myself  to running to help save my knees for outdoor.

Pittsburg is a town of about 25,000 people, and with Pitt State, has lots of life during the school session but is quiet during the summers.  I have enjoyed growing up here, though I feel that I would want to live in a little bigger city once I graduate all the schooling, someplace with a little more to do.

My favorite subject in school are science classes.  I would like to major in biology for pre-med so I’m trying to soak in as much as I can now.

In 10 years I hope to see myself with about one year left of residency to be certified as a pediatric surgeon.

Best places to eat in your surrounding area?