v Macy Doebele of Hanover named Sports in Kansas 1A-I POY - Sports in Kansas 
Warning: include(../includes/bodytag.php): failed to open stream: No such file or directory in /home/kansass/public_html/ks/news/index.php on line 36 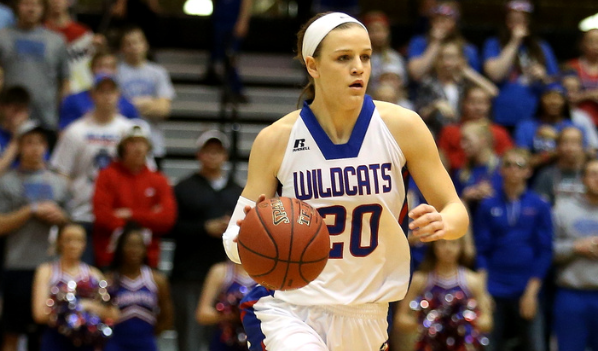 Doebele enjoyed another terrific season and led Hanover to its second straight state title. As a sophomore, she averaged 15 points, six rebounds and two steals a contest. This year, she upped those numbers to 20 points, seven rebounds and three steals. At state, Doebele delivered 24 points and eight rebounds in the first round against Frankfort, then had 20 points and 11 rebounds in the semifinals versus South Central. In the championship versus St. Paul, Doebele recorded 19 points and 12 rebounds. Hanover is well-known for drawing fouls and forcing turnovers. At state, the Wildcats shot 27 more free throws than their opponents. Doebele was the main factor. She finished 27 of 31 from the foul line. Defensively, Doebele picked up multiple charges, including a key early one in the semifinals against South Central standout point guard Bri Rutherford. Doebele was first team all-state in basketball last year and in volleyball in 2017.

Congrats to Macy Doebele on the Sports in Kansas 1A-I 2018 Player of the Year for 1A-I back-to-back state champion Hanover. We are proud of you! - Mom, dad, siblings and grandparents!

Target Marketing and Conuslting, Barbara Donovan, MBA, would like to congratulate Macy Doebele on her 1A-I POY honor. Proud of you, Macy Doebele! – Barbara, Andrew and Nathan.

Ohlde Elite would like to congratulate their very own Macy Doebele on earning 1A-I Sports in Kansas Player of the Year. We are proud of you! Find out more about Basketball Skill Development Academy and Ohlde Elite Club Girls Basketball Program. (785)317-3295