v 20 Girls Basketball Players to Watch this Weekend - Sports in Kansas 
Warning: include(../includes/bodytag.php): failed to open stream: No such file or directory in /home/kansass/public_html/ks/news/index.php on line 36

Taylor Robertson of McPherson is among the states elite players. (courtesy photo) 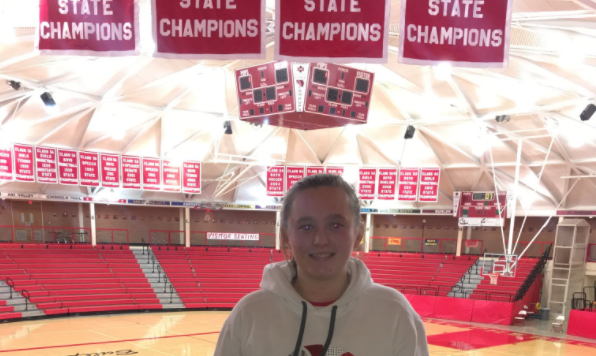 We go across all of the classes and look at over 20 players to watch at state tournament action through the semifinals and finals this weekend in Kansas.

It seems like we have been talking about her forever and she still has one season left to play. The  Creighton commit is one of the best players in the state and a matchup nightmare for teams standing over 6-feet tall. Bachelor helped lead her team in the semis for the first time since 2015 with an upset win over Manhattan in the first round.

Ashton McCory isn’t a scoring machine by any stretch but she is the leader of this Carroll group that looks to get into the state title game. She is the lone senior on this year Golden Eagle squad and will look to get them back in the 5A finals as BC is making their 15th appearance in the final four on Friday. Ella Larkin, Allison McFarren, Hannah Landwehr, and Britney Ho all went off for double figure points in round one.

They are one of the most complete teams in Kansas. All five starters get their jobs done and it’s not often that Miege has just one star player and it’s the same way this year. Johnni Gonzalez is one of the top defenders in the state and add in the rest of the starters to get a championship caliber team: Fallon Russell, Payton Verhulst, Courntey Harms, and Faith Hawthorne. Jordan Gonzalez and Ashton Verhulst also see close to 20 minutes per game for the Lady Stags. Terry English is going for his 21st state title this weekend.

The 6-foot-6 junior is a five star recruit that is one of the best players in Kansas. She has her team in the semis and will have to have a big weekend, first against Wichita South and if they win over either Washburn Rural or Olathe East. Brown has Derby in back to back final fours in 6A.

Has Piper into the semis for the second consecutive year and is one of the top 4A-I players in the state. It will take Pipers best game of the year to advance onto the 4A-I state championship as they take on Miege in the semifinals.

She helped lead them to state title a year ago and this year is one of the top players in 1A-I. She scored 24 points in the win on Thursday to giver her over 1,000 in her career and is only a junior. She causes matchup problems with her 5-foot-11 frame.

Gegg is one of the best players in the state and can flat out score. She is the only girls player in Kansas with over 2,000 career points. The Pitt State signee will have her hands full on Friday as they look to upset McPherson and Taylor Robertson. Yes, we know they are ranked higher in the seeding, but it will take Gegg a career night to pull off a win over McPherson. The good thing is she has those most outings.

She scored 24 in the opening round win on Thursday and has Haven into the semis for first time since 1975. Hendrixson was also an all-state pick in her class at Sports in Kansas last March. She also had 13 boards in opening round.

The junior is one of the top players in 6A and was a second team all-state all-class pick last season as a sophomore. She plays for one of the best teams and coaches in the state. She is a very good defender, very dependable free throw shooter and had 16 points in the opening round win over SMNW.

Joplin is having a big season and had 16 in the opening round win over Caney Valley on Thursday. With just one loss Garden Plain should be the favorite to get into the title game and win it in 2018. GP is in their first final four since 2013.

Liberal is a well rounded scoring group that is in the semifinals for the first time in 31 years. Katie Horyna, Ali Lucero, Audrey Gilmore, Machia Mullens, and Whitney Hay lead this group that has only one loss on the year.

Ogle has her team in the semifinals for the first time in three years and eighth time in program history. The senior who went over 1,000 career points earlier this season could be the top overall player in 4A-II this season. Ogle will have to have a big tournament to bring home hardware to Baldwin.

Pacha had 26 points in the opening round win over Nickerson to put Marysville into the semifinals for the first time since the 2001 season. Bartels had a monster double-double night on Wedensday as she pulled down 18 boards and tossed in 16 points. Nicole Franco also had 14 points in the win.

Robertson is the all-time leader in points scored at basketball powerhouse McPherson on the girls side. She has signed with Oklahoma and had 20 in her opening round win on Wednesday. She should have a scoring showdown this Friday against Tristan Gegg and Labette County.

She has led her squad to an undefeated mark this year and is a big time player for the Timberwolves. She has them back into the final four for the second consecutive year and just the third time in school history. The 5-foot-7 standout is just a junior.

Ryan is the most complete player in Kansas since Shalee Lehning of Sublette (2005) who would go on to Kansas State and the WNBA. She averages close to 38 points per game while nearly getting a triple double or sometimes nearly getting a quadruple double in several outings. It may only be Ryan going for her second title but CP is going for their fifth under HC Pat Stiles. Yes he is Jackie Stiles father. CP is now known as Central Plains while it was Claflin before the consolidation with Bushton-Quivira Heights.

Smith is a 1,500+ point scorer for Valley Heights and has them into the 2A state semifinals. She is also one of the best track and field athletes in the state of Kansas. It’ll take her best outing of the year to knock off Olpe in the 2A semis on Friday.

She had 17 in the opening round game win and has been big all year for the Monarchs. She was an all 3A pick a year ago for TMP and has her team in the semis for the third consecutive season.

Vogts has Olpe into the state semis and scored her 1,500th career point in the opening round game of the 2A tournament on Wednesday. We feel like we will be talking about Olpe and Central Plains in the title game and a big reason why should be Vogts.

Weledji has helped lead the Saints to the 5A title the last two years and will look to make it a third. The senior gets it done on both ends and is an outstanding rebounder. She was an all-state all-class pick a year ago. Aquinas is in their 20th final four appearance this Friday. Blythe Pearson, Alayna Townsell, and Allison Thomas are also capable of going off for double figures in any given night in scoring. This is one of the most complete groups in Kansas.

Wilson, a 6-foot senior, has her team off to an undefeated mark and in the 6A semifinals for the second time in three years. Wilson is a Missouri State signee and one of the best players in the KC Metro.