v Faces in KS: Kirsten Young - Sports in Kansas 
Warning: include(../includes/bodytag.php): failed to open stream: No such file or directory in /home/kansass/public_html/ks/news/index.php on line 36

Kirsten Young of Burlington is one of 4A-II's top players. (photo: Kramer Photography) 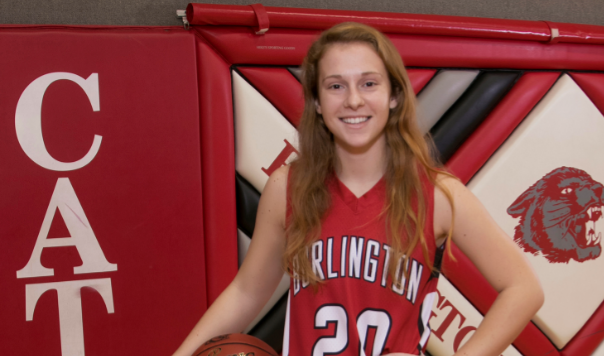 It's a big accomplishment when you reach the 1,000 career point mark in high school basketball, it's a milestone that many consider to be a very good high school basketball career. So what about when you do that when you're only a junior? Kirsten Young, junior at Burlington High School, knows exactly how that feels after going over 1,000 points back on February 23rd.

"It's crazy to think I did it before my senior year. The night was a very special feeling and it was incredible to experience it with my team, friends, family and the fans that came." Young said.

Although at least one more game left this seasn and an entire year next year, Young has had quite the high school career already in addition to her 1,000 career points. This year she has had a year that puts her on the map as an all-state candidate in 4A-II by averaging 22.1 points per game, 4.4 rebounds, and 2.5 steals per contest. The sharpshooter is also near the leaders in the state in three point field goal percentage at 42 percent this season. As a sophomore last year she averaged 13.5 points per game on the way to making second team all-state honors. As a freshman in 2016, she averaged 12.9 points per game. Young has been an impact player for the Burlington girls basketball team since she stepped on the court as a freshman back in November of 2015.

Young also gets it done in the classroom with a perfect 4.0 GPA and strives just as hard in academics as she does athletics. She would like to eventually work in sports medicine and also wants to coach. Young is seeing a lot of interest from colleges to play basketball at the next level and plans to play collegiate basketball when it comes time to make her decision next year. She also plays AAU basketball for Wheat State Elite in the off-season when she isn't playing a high school sport as she also plays volleyball and softball for Burlington.

It also helps that Kirsten grew up in a town that loves its basketball and has seen a lot of recent success. Burlington is a known basketball town in Kansas, most recently over the last several years because of Division I men's players Tyrel Reed (Kansas) and Geoff Reeves (Cornell), both who were multiple time all-state selections for Burlington back in 2006 and 2007. Hard to believe that two division one basketball players were on the same team and only a year apart at a 3A high school at the time, right? Go across the state right now or over time and tell me how many times that happens in that size of town.

But it's not just star players and boys teams that have made this a basketball town. The Lady Cats have been even more impressive than the boys over the last several years and have in the final four of 3A or 4A six times since the year 2000, including two state championships (2000, 2013). They have also made the state tournament nine teams in the history of the program, all coming since 2000.

"Burlington is a basketball town. Over the years we have had some great teams and state championships. We are very passionate about it."  Young said.

Burlington (17-3) and Young, lead by head coach David Gilman, will resume sub-state play this Saturday as they play the #1 seed Baldwin (19-1) in the sub-state championship game with a berth to the 4A-II state tournament in Emporia on the line. We caught up with the breakout junior player below in the latest Q&A edition of Faces in Kansas.

Growing up my brother Drew was always playing sports and I remember always wanting to play what he was.  We traveled to his games and I’d always try to sneak into the dugout.  Finally, when I was old enough I played every sport my parents would let me.  Drew challenged me and helped me become the athlete I am today.

Our team goal this season was to take the next step. Coming into a new league last year, my sophomore year, we finished as runners up. This season we stepped up and tied for first. The expectation I had for myself was to help lead the team in any way I can.

Coach Gilman always pushes us to do things we wouldn’t do on our own. He pushes me to become a better play day in and day out. The jokes he makes, also keeps it fun.

I am always one to outwork my opponent. My shot is defiantly my strongest weapon. Also, I have a good vision of the court, especially of fast breaks. Defense is something I really have been working to improve on.

It was crazy to think that I was able to do it before my senior year. It was an incredible feeling, going into this year I never expected to reach 1,000 points. The night was very special due to my team, friends, family, and the fans that came to experience it with me.

I do plan to play basketball in college. Yes, I have had interest from schools at different levels.

Camrie, our only senior, is a key player on defense. Ashlynn and Jara are quick and can score the ball when we need them to. Juniors, Paige, Julia, and Grace also play some key minutes for us.

A few of the best players I have played throughout high school are Tristan Gegg and Abby Ogle. Baldwin is in our sub sate and Abby, along with her sister Kate and teammates, will be our toughest yet.

Yes, I play Volleyball and Softball as well.

Burlington has given me memories that I won’t forget. I have come to love the closeness of a small town. Our community is incredible. They support our school and athletics in a major way.

One of my favorite classes in school is woodshop. Doug Stewart is the teacher, and being the previous basketball coach he never fails to give me advice when he can.

I see myself practicing sports medicine or coaching somewhere.

Subway is my go to. In fact, they have my order memorized, which comes in handy on game day.

What will it take to get to the state tournament?

Confidence will be key in our matchup with Baldwin. Not only that, but also shutting down their offense.

How important is basketball in Burlington?

Burlington is a basketball town. Over the years we have had some great teams and state championships. We are passionate about it.