v Faces in KS: Sydney Dwyer - Sports in Kansas 
Warning: include(../includes/bodytag.php): failed to open stream: No such file or directory in /home/kansass/public_html/ks/news/index.php on line 36

Sydney Dwyer of Wellsville looks to get her team to 3A state tourney. (Benji Hanks) 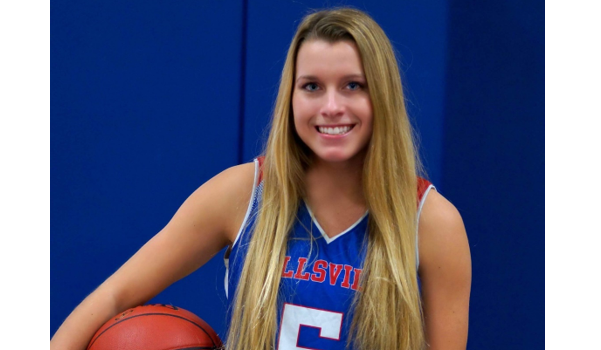 Wellsville senior Sydney Dwyer reached a milestone of 1,000 points back on February 13th in a 63-34 win over Metro Academy. It put her fourth all-time in Wellsville HS girls basketball history.

"Reaching 1,000 points was such an extraordinary feeling, and I am so blessed to be a part of such an amazing team and community." Dwyer said.

Dwyer isn't the biggest player on the court at 5-foot-5 but she makes up for her height with her agressive and quick style of play offensively and defensively.

"Being the shortest player on the court is sometimes is sometimes my biggest obstacle. I have to make up for it by being quick and anticpating the next play." Dwyer said.

Height doesn't seem to be to big of a factor if you see her play. Dwyer has averaged in doubled figures in the last three seasons for the Eagles and is an all-around complete player. As a senior, she is averaging 16.6 points per game, 4.7 rebounds, 3.4 steals and 2.4 assists. She has been named to the Paola Invitational All-Tournament Team and Top Gun All-Tournament teams so far this season. Last season she was named a 1st Team All-League, All-Area and honorable mention all-state seletion in 3A in leading her team to a 19-4 record. Dwyer also earned the same honors as a sophomore. She is also the all-time leader in steals in Wellsville history at 286.

More individual honors will be coming for Dwyer but a trip to the state tournament would mean everyhting as the last two seasons her squad has fell short by losing in the sub-state championship game. Wellsville (15-4) last made it to state when Dwyer was a freshman, it was also their first winning season in 18 years back in 2014-2015. Dwyer will look to put one final stamp on her career by getting her team in the tournament for the first time since 2015.

"I go into every game like it's my last. Our goal as a team is to get better every day. Our ultimate goal is to win the sub-state championship and get a shot at state." Dwyer said.

Wellsville (15-4) enters sub-state play tonight as the two seed as they host Osage City (5-14). Also in the field of eight is the one seed Eureka (16-3) and the three seed Council Grove (14-5) with only one team advancing to state next week in Hutchinson at the 3A state tournament. We caught up with the oustanding senior below in the latest edition of Faces in KS.

This feature is presented by

NewCo Concrete LLC, wishing the Eagles best of luck at sub-state in 2018.

Also special thanks to Layton Real Estate in Wellsville for powering 3A updates with Sports in Kansas over the last several sports seasons.

I got involved in sports very early on in my life. My entire family is very sports-oriented. My Grandpa coached high school boys basketball for 30 years and he really got me involved in basketball when I was a kid.

A goal I set this season is to go into every game like it’s my last and for my team to get better every day.  My ultimate goal is for my team to win the substate championship and get a shot at state.

Playing for my coach, Brock Campbell, is stressful at times but he has also pushed me to become the player that I am today. He’s tough but also lets us play with some freedom to get out of our comfort zone and play the game. I would also like to thank my competitive coach, Shannon Kite, for her endless hours and knowledge of the game to make me a better player.

I am an aggressive player both on the offensive and defensive end.  I think my biggest strength is I’m very quick and can anticipate the next play. My biggest obstacle is my height.  Being the shortest player on the court, it is sometimes difficult for me to finish the play so I need to work harder and get stronger in the paint.

Reaching 1,000 points was such an extraordinary feeling, and I’m so blessed to be a part of such an amazing team and community.

At this time, I am not sure what my future holds, but I know basketball will always be a part of my life whether I’m playing or coaching.

This year I am blessed to be on a team with amazing talent. We are full of key players which is why our season is going so well. Demi Aamold is doing a great job of hitting shots when we need them and keeping us in games. Paige Mcdaniel is an outstanding rebounder and continues to put up points for us.

Every year we play in the “Top Gun Tourney.” The tournament this year was full of insanely good teams with great athletes. Abby Ogle from Baldwin, Ali Vigil from Piper, and Laura Macke from Nemaha Central are all outstanding players that I had the opportunity to play against.

I ran track my freshman year, I played softball for two years, and I played volleyball for four years.

Wellsville is such a small community but it has the biggest heart. No matter what happens here you can always count on the town to come together to support anyone and everyone, including our girls basketball team.  We always have a great turn-out at our games.

Well, as of right now, I am currently undecided on a career but hopefully in 10 years I will have figured out what I want to do and be settled down with my family.

The best place to eat around here is the world's famous Smokey’s BBQ.