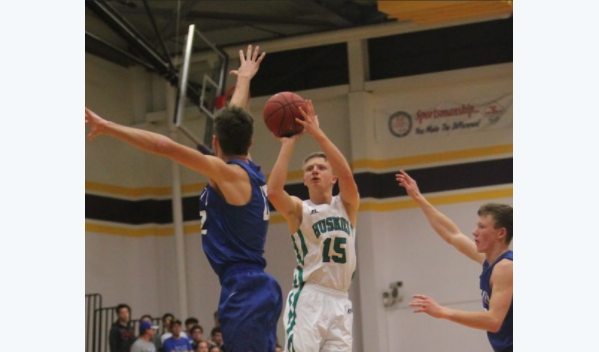 Riley Sides, junior at Northern Valley High School, in Northwest Kansas, is already enjoying quite the high school basketball career and still has his senior season left to play next year.

Sides, a guard, is having a breakout season for the 1A-II Huskies. He is averaging 17.6 points per game, 5.8 boards, 4.5 assists and 2.1 steals per contest to rank among the top all around players in 1A-II this season. Sides is also approaching the 1,000 career point mark as he sat at 960 entering this past week. Sides was a first team all league selection as a sophomroe last March as well as a KBCA second team all-state pick last year. He is well on his way to being a first team all-state caliber pick this season in 1A-II. He was also named last months Nex-Tech Wireless Western Kansas Athlete of the Month from Sports in Kansas.Sides helped lead his team to a WKLL League Tournament title last Saturday as they defeated Logan, 57-51.

In most part of small town America and small town Kansas sports are everyting and that is the same in at Almena-Northern Valley High School in Northwest Kansas. Sports are what you do for fun and Sides has been playing since he has been three years old. His cousin, Trey Sides, one of the top 3A multiple sport athletes at Phillipsburg, was part of his first team in a basketball tourney at a young age. Trey has been the starting quarterback at Phillipsburg since he entered high school as a freshman and may be more known as a basketball player.

"My parents got me involved at a young age. I played in my first three-on-three tournament with my cousin Trey." Sides said.

Sides love for basketball grew from there and has been playing ever since. Now he has his sites on getting his team to the 1A-II state tournament. Northern Valley is currently raned second in the latest Kansas Basketball Coaches Association Poll released on Monday. Only McPherson-Elyria Christian is ranked ahead, but as all of us know rankings don't mean anything its winning at the right time that does.

"Our goal is to win every night. We wanted to go undefeated but we ran out of gas in one of our games before break and couldn't quite get the win. Our goal is to never let that happen again this season and ultimately win a state championship at the end of the year." Sides said.

Northern Valley is currently 16-1 on the season after being Triplains-Brewster this past Friday. We caught up with the breakout junior below in the latest Q&A edition of Faces in KS.

This feature is presented by Almena State Bank proud to support Riley Sides and the 2017-2018 Northern Valley Athletic Teams.

My parents started getting me involved in sports early in my life.  I got my first basketball goal at 3-4 years of age.  I played in my first 3on3 basketball tournament with my cousin, Trey, in first grade.  I started playing in 5on5 tournaments in 3rd grade.  I also played youth football and little league baseball, but from the beginning basketball was always the season I loved the most and most looked forward to.

Our goal at the beginning of the year was to go undefeated this year.  We had total confidence in ourselves, each other, and the coaches to do it.  But we suffered a loss in the last game before Christmas at the end of our toughest stretch of our schedule.  We’d been playing well before the loss, but ran out of gas and couldn’t quite get the win.  We regrouped and healed up over break, and came from break motivated to never let that happen again.  Our expectation for the rest of the year is to go out and win every night and win the state championship.

Our coach is a fun guy to be around.  He is capable of making you laugh at anytime.  But once we show up to practice, it’s time to get serious and to get better.  He invests a lot of time into our team and wants to win as badly as we do.

I think of myself as a winner more than a specific type of player.  The only thing I’m concerned with is winning that night.  I’m happy to fill any roll I’m needed for each night.  I think that’s the greatest strength a team sport athlete can have.  If I had to pick a style I’d say scorer/playmaker.  It depends on the night which one I am or what blend of each I become.  If my teammates are shooting well that night, I’m happy giving up my shots to get them ones.  If they aren’t shooting well, I’ll look for my shot more and lead the team that way that night.  My weakness can be forcing things and trying too hard to get my teammates the ball in tough spots.

I plan to play basketball at the next level.  I haven’t seen a whole of interest yet, but all I can do is get better and put myself out there to be seen.

We play about 8 guys and they all make key contributions.  Nick Stutsman is the most unselfish player I’ve ever played with and is happy to do the little things needed to win that don’t show up in the scorebook.  Caden Bach is our rim protector on defense and biggest mismatch on offense.  Ross Cole is a lights out shooter.  Caden Kinderknecht is our only senior and is one of the leaders on the team.  Jesus Saenz comes off the bench and provides a spark via the long ball.  Fabian Lloya brings size and energy into the come when he checks in.  Alex VanPatten comes in and gives good minutes at the end of quarters to get the starters a quick break.

I’d say John Pfannenstiel from Ness City is the best player we’ve faced this year.  He’s a crafty scorer and ball handler and our was our main focus defensively against them.

I run track in the spring and play legion baseball for Norton in the summer.  I also enjoy golfing in my free time in the summer and fall.

I don’t think there’s anywhere better to be raised than NW Kansas.  I’ve loved being raised in this small town.  The communities support for us is amazing and really makes all of us thankful for the good people in this area.  As for activities, it can get boring sometimes but there are usually things we can find to do.  My friends and I like to go fishing and golfing together when all of us are free for a day or night.

I’d say math or Ag classes are my favorite.  Math is the subject that comes easiest for me and I like working with numbers.  I also enjoy Ag classes because agriculture is a big part of my life.

I see myself back in this area helping my dad on the farm and hopefully have a already started a family.

Almena doesn’t really have a restaurant.  In the warmer months of the year, the area likes to eat at the Hammond Hut down the road in nearby Long Island.  It’s a little place to eat where all the food is cooked in a little building off the highway in Long Island and there’s a patio area and picnic tables to eat at.  It’s run by a family in Long Island.  It’s a popular place for farmers to eat lunch during the summer.