v Faces in KS: Anthony Gaona - Sports in Kansas 
Warning: include(../includes/bodytag.php): failed to open stream: No such file or directory in /home/kansass/public_html/ks/news/index.php on line 36

Anthony Gaona is 33-1 this season for STA. (Photo: Michelle Gress) 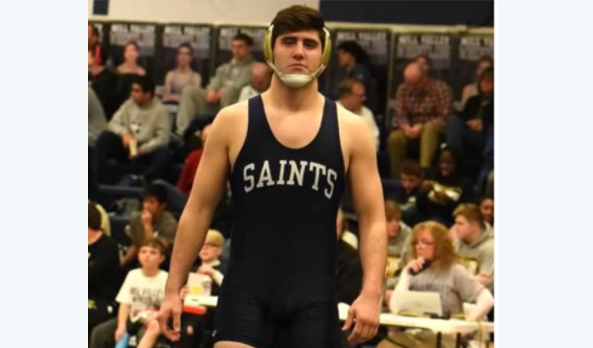 When it comes to high school wrestling in the state of Kansas one of the best in the sport in our state is St. Thomas Aquinas senior Anthony Gaona.

Gaona is off to an oustanding season in 2017-2018 with a 33-1 record. The three-time team captain is 140-35 over his career with three EKL league titles. Gaona was the regional champ in 5A last year before taking fourth place at state, going 41-5 in 2017. He has signed to compete at the very solid Nebraska Connhuskers program next season at thte Division I level.

Gaona used his wrestling background to make him a multiple sport standout athlete and had 61.5 tackles, six sacks, 20 QB hurries, 12 tackles for loss and four pass break ups on the loaded STA football team over the last two seasons. Aquinas would take runner-up this past fall in 5A. He was a two time All-EKL honorable mention pick in the states best league along with being a 2017 team captain for legendary head coach, Randy Dreiling.

Gaona has his sites set on a state title this year after being all-state each of the last two wrestling seasons with top six finishes, fourth last year and sixth the year before. He is currently ranked second in the state in the 195 pound class behind Newton junior Wyatt Hendrickson. Aquinas, led by head coach Eric Akin, a former Olympic Alternate out of Iowa State that was a three time KS champ at Bishop Miege, is ranked sixth in the latest KWCA poll. Gaona will next be back in action at regionals. We caught up with him below in the latest edition Q&A edition of Faces in Kansas.

How did you get involved with sports?
When I was five my parents thought I was lazy and fat, so they put me into wrestling and football so I had something to do with my time besides sitting around and eating. My first year I wrestled 6 and under 76 pounds to give you an idea of what I looked like.


What are the goals and expectations this season?
Of course my goal this season is to win a state title at the end of February. Being the only senior on the young team we have, another goal is to give the underclassmen a good platform to continue the winning tradition at St. Thomas Aquinas, especially in wrestling.


What is it like to play for your coaches at STA?
Ever since the coaching change my sophomore year it has been a little different. With Akin being an olympic wrestler the expectations are very high in succeeding, but at the same time he wants us to enjoy the sport and just get better while we wrestle under him. The coaching staff we have is very likeable and I enjoy wrestling under all of them.


What style of wrestler are you, what are your strengths and weaknesses?
My style has changed over the years of wrestling since I was five. I use to always wait and score off of their moves, but recently I have learned to be the attacker and not wait until they shoot, but make my own points and wrestle the match the way I want it to be wrestled.


What led you to choosing Nebraska and what do you expect when you get there?
I really like that it is far enough away so my mom can’t always show up at my dorm, but it is also close enough that my family can come watch me wrestle when they want to. I expect to redshirt my freshman year to get into the college 197 pounders body. I expect to succeed and eventually wrestle for Nebraska in the starting lineup. The feeling of the Nebraska team really felt like a family and that is a big deal to me.

Other key wrestlers your team this year?
There is a lot of kids on the team that will be big names to watch in the next couple years. Some to note are Johnny Akin, Jerod Simma, Malachi Vann, and Peyton Reeves. While all four of them are already making a name for themselves they have a lot more to offer and will take the big stage in years to come. Bret Minor is already a one time state champ in 2017 and I expect to join him at the top in a couple weeks. Eli Bergren and Peyton Reeves are who I practice with everyday and I would not be where I am without them everyday in the practice room. There is a couple other middle weights who have the potential to really help the team this year and years to come.


Best wrestler you’ve went against and other key players you’ll face this season?
One of the best wrestlers I have wrestled in all my years would be Miles Lee from Pennsylvania. We wrestled at Fargo in 2017. There are always good kids that I will have to wrestled throughout the state series, I just have to go out there and wrestle my match.

How was football this year?
Football was very exciting this year, winning was fun. Coach Dreiling and the coaching staff are great coaches and teachers and stressed a winning approach and tradition. We had great support from our fans and former players. The team had a family feeling and it was fun to work with and be around all associated with the football team. We finished the season 11-2 with losses to Bishop Miege and Bishop Carroll. We lost in the state finals, but that does not take away anything from the season that we had. With me having two sisters, always being with the guys 6-7 days a week makes it feel like a family.

Do you play any other sports?
I have played a couple other sports in my life. I tried baseball as well as track and field when I was about 10 but I found that those sports were too slow. Playing football and wrestling there is always a lot of action while doing both sports, so I stuck with them.

What’s it like to grow up In KC area and go to your school?
Being a private high school in the KC area it pulls kids from all walks of life. While you'd think it was just a bunch of Catholic kids that come from perfect homes it is really much more than that. We all wear uniforms so the stereotypes don't exist. Kansas City as a whole is a really amazing city with a lot to do all the way out to The River Market, to the Plaza, to Crown Center, and even Stagecoach Farmstead in Olathe.

Favorite subject in school?
I really like History. It has always intrigued me and always been the easiest subject for me to understand.


Where do you see yourself in 10 years?
Hopefully in 10 years I will have graduated college with a masters in business from Nebraska and made my way back home to Kansas City with a good job.


Best place to eat in your surrounding area?
I have a strange addiction to Chipotle, I could eat it everyday but I do not have the money to provide myself with it every day.


When is your next match and who did you go against, when was your last match against who and what was the score?
The next time I wrestle will be at regionals, which starts the state series. I am expected to be the one seed in my regional and probably with a huge target on my back. We just finished EKL where I won it 6-1 in the finals against Josh Cruz.