Max Wilson signed his national letter of intent with Pittsburg State on Wednesday. 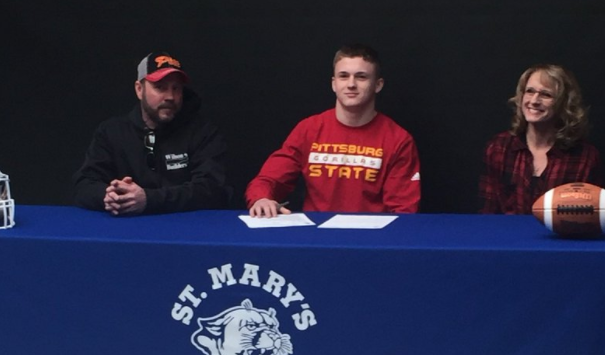 Labette Bank is a proud supporter of local athletics and Sports in Kansas. Labette Bank would like to congratulate the following signees from the Southeast Kansas area on continuing their football careers at the next level.

Be sure to nominate the Labette Bank Athlete of the Month over the last seven days of each month by emailing nominations, Chet Kuplen, Managing Partner of Sports in Kansas, at sportsinkansas@gmail.com

We take a look at the area football signees for 2018 below...

Brown was a second team All-SEK league wide reciever and an honorable mention All-Area pick in 2017 for the Tigers.

Callahan was a two-time all-state selection for the Tigers. He was also a finalist for the 4A-I player of the year this season from Sports in Kansas as well as a two-time All-Area and All-SEK pick for Fort Scott.

Fewell finished as the all-time single season rushing leader in Fort Scott Tiger history with 1,960 rushing yards and 36 touchdowns in 2017. The senior had a breakout year in earning 4A-I all-state honors and was a finalist for the 4A-I Player of the Year.

Strand earned first team all-league, all-area and 4A-II honorable mention honors for the Raiders as a offensive lineman and defensive end. He was a big part of the Raiders successful defense in making it as the 4A-II runner-up.

Anderson is a 2018 Kansas Shrine Bowl selection and earned all-state honors at defensive back in 2017. He features 4.5 speed in the 40 and also doubles as a return man.

Mayhue had a breakout senior season in the backfield for the Grizzlies in rushing for over 1,000 yards. He earned first team All-SEK league honors and All-Area honors in 2017.

Phillips was a first team All-Area selection for the Grizzlies as well as first team all-league this season.

O’Dell was a two year starter for the Vikes and earned was an All-TRL pick on the lines this season.

Stephens earned second team All-SEK honors and honorable mention All-Area honors as a senior for the Vikings in 2018.

Eicehlberger was a first team all area selection for the Purple Dragons as a senior on the offensive line in 2017.

Johnson had a breakout senior season in which he ranked near the top of 5A in tackles with over 100 stops in the year. He was a first team All-Area selection this season as well as a 5A honorable mention all-state selection.

Wilson is a 2018 Kansas Shrine Bowl selection and was one of the fastest small school players in the state. Wilson doubled as an all-state running back and linebacker over the last two seasons for the Panthers. He is also an exceptional kick returner and was an all-state track athlete as a sophomore two years ago.