v Faces in KS: Alyson Potter - Sports in Kansas 
Warning: include(../includes/bodytag.php): failed to open stream: No such file or directory in /home/kansass/public_html/ks/news/index.php on line 36

Alyson Potter of Towanda-Circle HS is ranked #25 in the nation at forward. (photo: Ryan Tarletsky) 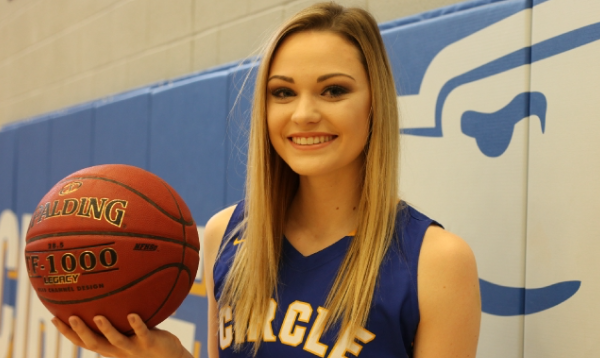 Circle High School located in Towanda landed one of the rising basketball players in the state of Kansas in transfer Alyson Potter at the beginning of this school year after her dad, Don Potter, was named the new USD 375 Circle Superintendent.

Potter, a 6-foot-1 junior forward, played the last two seasons at 3A Neodesha for her father in the Southeast Kansas area after growing up in the Northeast Kansas in Waterville at Valley Heights. At Neodesha, Potter was a rising star in the small school ranks as she averaged 17.5 points per game as a freshman, being named first team all league, honorable mention all-state and the Independence Reporter All-Area MVP two seasons ago. As a sophomore, Potter was having a breakout season but missed the second half of the year with injury after averaging 19.2 points per game.

So far her transition to Cirlce has been a good one since arriving to her new school. She is averaging in double figures on the season at 12 points per game and has been ranked the #25 forward in the country by ESPN Hoop Gurlz for the Class of 2019. Potter has been named to the T-Bird Classic All Tournament Team and the Lady Cat Classic All-Tournament Team since her arrival in Towanda.  It also led to an offer from Division I Southern Illinois University out of the Missouri Valley Conference in which Potter committed to on January 31st. The competition level has also elevated itself since leaving Neodesha for the Wichita area.

"Im thankful to live in all of the towns that I have lived in, they have all shaped me to who I am. I lived in Neodesha for four years, with my dad being the coach the last two years. Neodesha was alot different than Circle with the competition being greater in the Wichita area. I feel like the move to Cirlce was a good move for me. It has allowed me to have better access to training and may new opportunities to improve." Potter said.

Potter is an inside and outside threat with a lot of versatility. Her biggest strength is defense where she can guard one thru five, but she knows she has parts of her game to work on before playing her senior season next year and moving on to the college ranks.

"I've been working hard to get physically stronger and improve in all aspects of my game. I am working on getting better in the post." Potter said.

Right now Potter's focus is on the 2017-2018 season and trying to land the T-birds in the 4A-I state tournament. Currently they are ranked #5 in the latest KBCA 4A-I Poll with a 11-3 record. Two of their losses are to 6A competition while their third loss is to 4A-I power McPherson earlier this season. Circle will be back in action tonight as they take on Wichita Collegiate. We caught up with the 2019 rising Kansas talent, Alyson Potter, in the latest edition of Faces in Kansas below.

This feature is presented by Birch Perfromance specializing in Personal Training, Sports Performance and Massage Therapy. Birch Performance is a proud to support Alyson Potter and the Circle T-Birds. Best of luck in 2017-2018.

My main goals for this season is for myself and my team to get better everyday, and to win a sub-state championship.

Playing for Coach Henry is a lot of fun, he allows us to have some freedom to make plays if we feel we can.  He really helped with my transition into Circle this year.

I consider myself a versatile player, both an inside and outside threat.  I believe my biggest strength is my ability to guard all positions, and my biggest weakness would probably be post play.  I’ve been working hard to get physically stronger and also improve in all aspects of my game.

What was Neodesha like how long were you there and how has Circle and the move been?

I lived in Neodesha for four years, with my dad being my coach my freshman and sophomore year.  Neodesha was a lot different than Circle, the competition in the Wichita area is much greater and I feel the move to Circle was a good move for me.  It allowed me to have better access to training and many new opportunities for me to improve.

Why did you choose SIU and what all offers did you have?

Several other schools have visited with me, however, I didn’t have any other offers at the time.  The main things that sealed my decision to commit to Southern Illinois was the coaches, players and their family-like atmosphere.  I had been there a couple times and really enjoyed it.  Choosing Southern Illinois was something that just felt right in my heart.

I think everyone has a key role on our team in order for us to win games, but Carissa Beck is definitely a key for us.  She creates space for our offense with her great 3 point shooting.

The best player I’ve played against this season is Taylor Robertson from McPherson.  She is an incredible shooter and is so good with the ball because she has great poise and doesn’t allow the defense to speed her up.

I played volleyball my freshman and sophomore year at Neodesha.  After moving this past summer, there were so many training opportunities for me to get stronger and work on my basketball skills so I decided to focus on getting better in that area instead of playing volleyball at Circle.

What’s it like to grow up in your town or the towns you’ve lived in?

I grew up in northeast kansas until 6th grade at Valley Heights in Waterville, followed by Neodesha, and then Circle.  All of those communities were always supportive of me and our teams.  I’m thankful to have lived in those towns, each place developed me into the person I am and each one has taught me great things.

I would like to be a physician’s assistant in an orthopaedic or sports medicine field.

My favorite place to eat is Oak & Pie in Wichita