v Faces in KS: Martin Vogts - Sports in Kansas 
Warning: include(../includes/bodytag.php): failed to open stream: No such file or directory in /home/kansass/public_html/ks/news/index.php on line 36

Martin Vogts is looking to get the Mustangs back to the 4A-II state tournament. 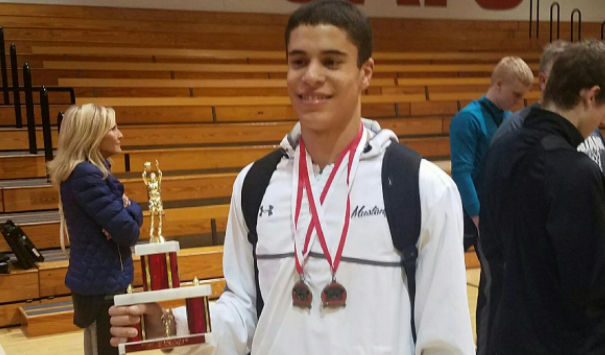 The Rock Creek High School boys basketball team is coming off an impressive 100-78 Burlington Tournament win over Burlington on Saturday as they saw head coach Jim Johnston reach 300 career wins. In that game, all-state senior Martin Vogts paced the Mustangs with a single game school record 39 points along with 30 from teammate Carson Zenger.

"It was a big game for us. We scored over 100 points with Carson and I having big nights, and coach getting his 300th win, so it was great!" Vogts said.

Big nights are common for Vogts, a 6-foot-4, senior, guard, who earned his second straight Burlington Tournament MVP honor on Saturday after scoring 94 points over three games. He scored 20 in the tourney opener against Independence, 35 in the come from behind semifinal victory over Sabetha and 39 in the championship win over Burlington. He also had eight rebounds, seven assists, two blocks and two steals in the championship game. The senior was an 4A-II all-state selection from Sports in Kansas last March and is one of the top 4A-II basketball players in the state of Kansas. He broke the Rock Creek scoring record as a junior last year for single season with 506 points on his way to averaging 23 points per game, six rebounds, three assists and three steals per game. This season he has followed that up by averaging 22 points per game for the Mustangs so far in 2017-2018.

Vogts pairs with sharpshooting Carson Zenger to form one of the top duos in 4A-II this season. Austin DeWeese and Skyler White are also having big years for the Mustangs who are currently 12-0.

"We have a lot of key players on this team. Austin has handles and bangs with the post down on the block. Skyler makes opposing guards uncomfortable with his quickness and athleticism. Carson can shoot the three better than anyone I know and is huge with boards." Vogts said.

The Mustangs, who rank second in 4A-II in the latest KBCA poll behind defending champion Holcomb, wont have an easy path to the state tournament either. Their sub-state features last years 3A champion Marysville, who features one of the best player in Kansas in Gabe Pieschl, after moving up a classification for 2017-2018. Holton and Clay Center are also in the sub-state that will be hosted by Holton. Last year Rock Creek lost in the first round of the 4A-II state tournament to Topeka-Hayden in Emporia.

Sub-state is still a ways away as Rock Creek has it's eyes on nearby Wamego, who is ranked in 4A-I, that they will face this Friday. We caught up with the senior all-state selection below in the latest Q&A edition of Faces in Kansas.

This feature is presented by Southside Auto Sales, Inc. in Manhattan. Proud to support Martin Vogts and the Rock Creek Mustangs.

I got involved in sports when I was in preschool. I played football, baseball, soccer and basketball. My birth dad played basketball in college at Cincinnati so basketball has always been in my blood.

The goals this season are going 25-0 with a state championship. The first basketball state champion in Rock Creek history. My goals are avg. 25ppg and trying to get a double-double most games. Also, breaking the career points record at Rock Creek.

Playing for Coach Johnston is fun and exciting. He’s an amazing coach with a great personality.  He always wants me to do my best and give everything I have. When I am having a bad day he always cheers me up. I love playing for him and wouldn’t want to be coached by anyone else.

How big of a game was that with your 39, your teammates, Carson Zenger's, 30 and your coaches win milestone?

It was a big game for Carson and I. I trust Carson, his shot and his ability to play the game. Most teams don’t have two guys like Carson and I who can score from any position. Carson takes a lot of attention away from me and I do the same for him. We are a duo that cannot be stopped. Being on the floor and putting up 100 points on Coach Johnston's 300th win was great. He is amazing coach and amazing person.

The style of player I am is whatever the team needs me to be. I will do whatever to win a game. My strengths are driving to the bucket, finding my teammates when they are open and controlling the tempo. Weaknesses are just moving on to the next play after a turnover or a foul.

I don’t know yet. I have been in contact with a lot of coaches.

My whole team is key players. The biggest  key players though are Austin DeWeese, Skyler White, and Carson Zenger. All three of them can play,  Austin handles and bangs with the post down on the block. He is only 6"1 but goes up against 6"5 or 6"6 kids. Skyler makes opposing guards uncomfortable because he is so quick and athletic. Carson can shoot the 3 better than anyone I know and grabs boards on both ends of the floor.

Best player I have played against is Zach Harvey the last 2 years of state and sub-state. He's a great player that deserves every D1 offer he has and that he will get. The other key player is Gabe Pieschl  from Marysville High School. The kid can shoot the ball and drive to the basket hard. His a great player that Rock Creek will face and I am looking forward to it.

I played football my Junior year but got hurt and stopped halfway through the season.

Growing up in my home town is  fun and exciting.  Playing with players my whole life and still playing with them now is best experience a kid could have.

Favorite subject in school is English.

I see myself coaching either at a high school or college.