v Faces in KS: Emily Ryan - Sports in Kansas 
Warning: include(../includes/bodytag.php): failed to open stream: No such file or directory in /home/kansass/public_html/ks/news/index.php on line 36 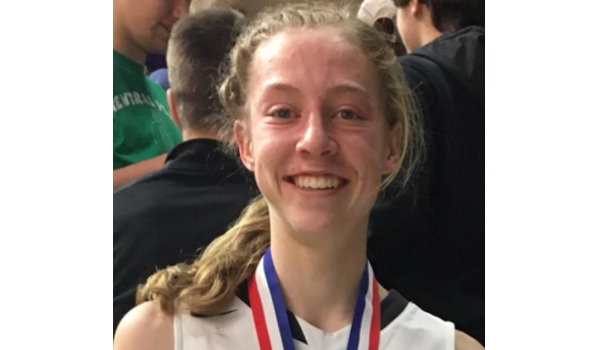 Claflin, Kansas is a Central Kansas town with a population of just 645 people. The high school in the town is called Central Plains High School with an enrollment of just 94 students in grades nine thru 12. It was once known as Claflin High School until consolidation of Bushton-Quivira Heights and Claflin formed Central Plains a few years back.

Claflin is a known sports town with multiple state titles in football, basketball, tennis, individual titles in track and field, you name it. They are always in the mix when it comes to 8-man football and 1A/2A athletics over the years. It's also the home of the legendary Jackie Stiles, who is perhaps the greatest female athlete in the history of Kansas high school sports, that went on to start at Missouri State (then SW Missouri State) and the WNBA. Stiles averaged 46.4 points per game as a senior girls basketball player at Claflin High School back in 1997. She scored 3,603 points in high school for the Wildcats, still a Kansas girls state record, and won 14 individual track and field titles of the possible 16 that you can enter. She is now an assistant coach at Missouri State and her father Pat Stiles is the head girls basketball coach at Central Plains. He has won the last four state titles in 2A. CP is also 112-1 since the start of the 2013-2014 basketball season.

There is a ton of success in this small central Kansas community that now call themselves the Oilers since consolidation. Sure Central Plains girls basketball has been rolling with the likes of stars like Reagan Phelan and Taylor Rolfs, who both graduated in 2016, that won three state titles at Claflin and now start in the MIAA for Washburn and Fort Hays State respectively as sophomores.  But the second coming of something very special may just be on the rise in Claflin and that is sophomore superstar Emily Ryan.

Ryan, a sophomore guard for the Oilers, has opened the eyes of everyone across Kansas and she has played less than a season and a half of high school basketball. As a sophomore this season, she is averaging 37.2 points per game, 7.7 assists per game, 5.7 rebounds per game and 6.3 steals per contest. If you think those stats sound made up, it gets even better, she is shooting 69 percent from the floor, 95 percent from the free throw line and has done all this in just 24 minutes per game.

As a freshman last winter in leading the Oilers to a four-peat in 2A she averaged 21.8 points per game, 6.4 assists, 5.4 steals, and 3.7 rebounds per game. She was the 2A Player of the Year in the state by Sports in Kansas in addition to earning first team all-state all-classes, the only freshman on the list. Ryan already had 903 career points in less than a season and a half of high school basketball. Ryan is the most complete player in the entire state of Kansas and this state is known for top-notch talent over the years. Not to put unlreastic expectations on a sophomore to super-star status but you have to be thinking is this the second coming of Jackie Stiles? Only fitting that she plays for Jackie's father, Pat.

"It's really cool being from the same town as Jackie and playing for Coach Stiles. She is the one that put our town on the map and really helped make this a basketball community. I've always looked up to her so it's an honor when people compare me to her because she was such an amazing player. I absolutely love playing for Coach Stiles, he is the best coach in the state because he cares so much about his players and always puts us in a great position to win. We are lucky to have him." Ryan said.

Sure Ryan gets the comparisons a lot, how would she not? This season she has three games in which she scored 45 or more points, those being 45, 48 and a season/career high 51. If she played four quarters at some point maybe she will get the opportunity to break Stiles all-time single game point record of 71 in a game back in 1997. But she isn't all about the hype that surrounds it.

"It's really cool people view me as one of the best in the state but I try to ignore that and just focus on winning. We have had a lot of other key players step up on our team on the court and with leadership. Our team's goal is to get better everyday and to be the best team we can be. If we stick to our principles then the outcome will take care of itself." Ryan said.

A dominating team that is as Central Plains is undefeated through nine games and has scored 707 points in those contests to only allowing 215. That's beating opponents 78-to-23 on average. CP is in a league of their own in small class basketball, ranked #1 in 2A. CP may not get the chance to play up much but if they had to they could at any level in Kansas. The closest anyone has gotten to them this year is 33-points. CP is one of the best teams in Kansas, regardless of size and has been for quite some time, even before Ryan. She also has two older brothers and a sister that have all had success on the basketball court and in other sports for the Oilers.

Emily, in our opinion, is the best girls player in the state of Kansas and one of the top sophomore point guards in the country for the Class of 2020. She will have every opportunity to probably go to about any college that she wants to play basketball, but right now she has one thing on her mind and that's getting the Oilers (9-0) back in to the 2A state championship where they will look to five-peat in Manhattan this March. In Ryan's latest game she went for 48 points, 13 assists, seven rebounds and five steals in just three quarters of action on Friday. We caught up with the sophomore phenom below in the latest Q&A edition of Faces in Kansas.

Growing up, sports were always a huge part of my family. I was always going to one of my siblings’ tournaments and that’s what really got me interested in playing.

Our team’s goal is to get better everyday and to be the best team we can be. If we stick to our principles then the outcome will take care of itself.

What is it like to play for head coach Pat Stiles and also your dad who is an assistant?

I absolutely love playing for Coach Stiles. He is the best coach in the state because he cares so much about his players and always puts us in a great position to win. We are lucky to have him. Playing for my dad has also been fun because he always coached me growing up so it’s special to continue that.

What is it like to be from a sports community?

It’s great being from a community that supports all our teams so well. We always have big crowds, which makes playing even more fun.

You were too young to see her play but how cool is it that Jackie Stiles played in your hometown, do you model your game after her, we’ve heard comparisons already, what has all that been like?

It’s really cool coming from the same town as Jackie. She is the one that put our town on the map and really helped make it a basketball community. I've always looked up to her so it’s an honor when people compare me to her because she was such an amazing player.

There are so many great players in the state so it's really nice that people have been calling me that. I try to ignore the media as much as possible, but it's still really neat that people view me that way.

I like to take people on the dribble more, but I’ve been working to develop my shooting too.

Plans at the next level and seeing any interest, do you have any offers?

I don't know where I will end up but I do plan on playing at the next level.

What’s the most points you have scored in one game, your second best and your third best?

Rachel Lamatsch and Delaney Rugan are really good shooters who are playing great this year. Avery Hurley is one of our best defenders and really stepped up at the end of last year and has continued that success into this year. Julie Donecker is our lone senior on varsity so her leadership is important for our team. Addison Crites and Rylee Cunningham do a really good job coming off the bench.

I've played a lot of really good players in the summer, but Karsen Schultz from Wabaunsee is one of the best I've played in school ball.

I play tennis in the fall and did track last spring.

What’s it like to grow up in your town besides the sports?

Claflin is a really small and quiet town so I mainly just hang out with my friends and spend time with my family.

My favorite subject is probably math.

I honestly haven’t decided what I want to do yet so we’ll just have to see what the future holds.

My friends know that I can always go for some McDonald's even though the closest one is 20 minutes away.