v Faces in KS: Chandler Ostmeyer - Sports in Kansas 
Warning: include(../includes/bodytag.php): failed to open stream: No such file or directory in /home/kansass/public_html/ks/news/index.php on line 36 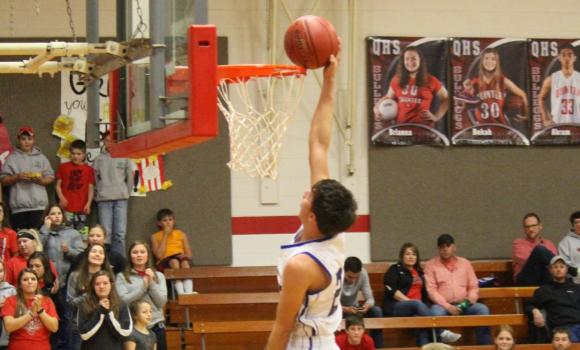 Located just off I-70 in Grainfield, Kansas, which is just over 90 miles from the Colorado border is Wheatland High School. The towns that feed into the school are extremely small. Grinnell, Grainfield, Park, Gove, and Angelus all combine to form Wheatland High School or known to many by KSHSAA listings as Grainfield- Wheatland/Grinnell HS.  The biggest town out of all of them is around 350 people, and the smallest is around 10 people. The consolidation of Grinnell and Grainfield form the high school in Grainfield, while the middle school is in Grinnell. This year the high school features one of the top 1A-II basketball players in the state in senior, Chandler Ostmeyer.

Ostmeyer, a 6-foot-4, senior, guard, is averaging 24.5 points per game, 9.5 rebounds per game, and 3.3 blocks per game for the 1A-II Thunderhawks in 2017-2018. He is one of the top small school scorers and rebounders in all of Kansas. He isn't a one year wonder either as he averaged 15 points and nine rebounds last year, averaged 17 points and six rebounds as a sophomore, then averaged around nine points a game as a freshman.

We talk about small schools and towns all the time but this is perhaps one of the smallest if not the smallest school we have ever had a player feature on. In by saying small, we mean very small as his high school has just under 60 students. There is also lot of travel involved for Western Kansas teams, something that a team from the eastern side of Kansas would not know much about.

"It's fun to be a small school athlete where everyone looks up to you and everyone knows you. The only bad part is the travel, where it's not uncommon to travel two to three hours for a game. Everyone around these communities are supportive and they even come to the away games. They teach you how to be humble and to never get ahead of yourselves." Ostmeyer said.

There's a reason younger kids around the surrounding small towns look up to the 6-foot-4 senior. On Tuesday night, he hit a milestone as he went over 1,000 points in his career by scoring 20 points in the 52-48 win over Dighton. He is also a multiple sport athlete as he was a 6-man all-state selection in football this past fall, yes you heard that right we have a small amount of teams who play 6-man in Kansas, not yet recognized by KSHSAA. He was also selected to play wide receiver in the 8-Man All-Star game in Beloit this summer, being that 6-man players are eligible for the game. In the summer he also plays AAU ball with other small school stars like Tate Busse (St. Francis) and John Pfannenstiel (Ness City), both featured athletes as well on Faces in Kansas.

Wheatland-Grinnell isn't where they want to be record wise at 4-4 and know they have a lot more to accomplish this year. They will be back in action when they play at Cheylin in their next game. We caught up with the 1A-II star below in the latest edition of Faces in Kansas.

I got involved with sports when I was around a fourth grader. It was a passion for me because I loved competing against kids my age. Once I got into middle school, I participated in football, basketball, and track. This carried over to high school and sports is still my number one passion.

The goals and expectations have been the same since freshman year. Every year we start with the goal of making it to state. Out of my three years in basketball, my team has made it to state twice. We have a lot of expectations every year and that makes it fun to play because you are playing for something big.

In my four years of high school, I’ve played three under Brendan Ptachke. He was a great coach, but an even better man; he taught me more than just basketball, but how to be a man. When he told me he was leaving, I thought to myself, “There’s no way anyone can fill in his shoes,” but I was very wrong. Will Bixenman is coaching me right now, and he has exceeded everything I can imagine. He teaches me parts of basketball I didn’t know, and like Coach Ptachke, he is teaching me how to be a better man.

I am a 6’4” 175-pound guard really. I start out games as a post, but I move out to a guard. I have always been able to drive and get to the hole. This year, with the help of my teammates, I have improved my three-point shooting tremendously.

I would love playing on the next level anywhere my style of play fit in or was needed. However, it’s about where I’m at right now that I’m focused on. If I look too far into the future, I could lose track of where I’m at now and that wouldn’t be fair to my teammates.

Just how small is your town? What is it like to be from such a small town? Where’s the nearest play you travel to go to the stores etc?

The towns that feed into my school are extremely small. Grinnell, Grainfield, Park, Gove, and Angelus are all combined to form Wheatland High School. The biggest out of all of them is around 350 people, and the smallest is around 10 people. It’s fun to be a small-town athlete: kids look up to you and you know everyone. However, it has its bad parts, like traveling two or three hours to play a game.

I have multiple teammates that have a lot of talent. Kyler Haffner is our point guard, and he has done really well. I’m sure he will be an All-State basketball player in his junior and senior year. He is big for us because he runs our offense and defense, we can’t be a great team without Kyler helping to lead charge. He is only a Sophomore but he is already a great leader. Zach Gillespie is shooting the ball for us really well. We ask a lot of him, and he steps up and performs when we need him to. Mason Bixenman is one of the most improved players we have. He is a lock down defender and he knows that’s his roll on the team. These are just three of the guys, but the others have played tremendously. We are all working on getting better; not a single one of us doesn’t need to improve.

This summer I played on an AAU team with great players like Tate Busse and John Pfannenstiel, we decided that one of the best defenders in Kansas has to be Latham Schwartz. He’s an incredible athlete that continues to work hard and get better for his team. He is an excellent athlete that bugs great offensive players. Throughout the year we will face a good Northern Valley team, and they have an incredible point guard with Riley Sides. He is a tough competitor and I think that’s why he succeeds.

I have played football all four years and track for three.

To grow up where I come from is special. Everyone in the community is very supportive, and they come to all the games, even if they are away. They also teach us how to be humble and to never get ahead of ourselves. I think that’s an important factor on how we act during games.

My favorite subject has to be PE. It’s an hour that I get to work out and lift, and not stress my mind about it.

In ten years, I see myself graduating college with a degree in agronomy. I want to move back to my family farm, and start a family to watch my kids grow up in the same community as I did.

The best restaurant in the state of Kansas has to be the Mainstreet Dugout in Grainfield. They have the best menu and they even have a catering business. The owners even come to our games and support us. There really isn’t a better place to eat.