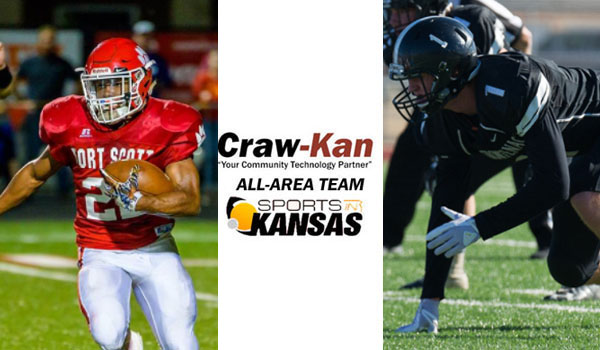 Craw-Kan Player of the Year Honors

Fewell set the single season rushing record for Fort Scott with 1,960 yards this season for the Tigers. He was the leading rusher in the state of Kansas for the 4A-I classification. Fewell also scored 36 touchdowns in leading the Tigers to the 4A-I playoffs after having a losing season in 2016. The 5-foot-8, 190-pound back was a 4A-I Player of the Year finalist from Sports in Kansas and was an All 4A-I pick by every major publication in Kansas at running back.

Ginavan was the 4A-II Defensive Player of the Year in the state of Kansas for the 2017 season. He was also a Top 11 selection from the Wichita Eagle this season in all-classifications in Kansas, becoming the first Frontenac player to earn that honor since 1965. The 6-foot-4, 220-pound, senior, led a defensive unit that shut down Holton and Topeka Hayden on the way to an appearance in the 4A-II title game for the first time in 17 years. Ginavan had 168 tackles and 20.5 sacks in his three years as a starter.

Co-Coach of the Year

On paper going into the year, this may have been the fourth or fifth best team that Mark Smith has had at Frontenac, but it’s the only one that has reached the title game. Nobody in the area or state had the Raiders playing for a title after they lost 10 offensive starters from the loaded 2016 squad. The Raiders had a rough start but caught fire in the playoffs knocking off Holton and Hayden in upsets to take 4A-II runner-up, reaching the title game for the first time in 17 years. Outstanding season turn-around for one of the states top young coaches.

Wiatrak earned coach of the year honors last year from Craw-Kan and repeats it this year by punching their ticket to the 8M-I title game for the first time in 15 years. Wiatrak came full circle with the Indian program as he played in a title game as a quarterback, was an assistant coach on two title teams and now a head coach in a title game. Nobody had the Indians punching a ticket to the state title game and they did so by impressive come from behind victories over state powers Osborne and Burlingame, teams they shouldn’t have had any shot at coming into the year.

Sports in Kansas handles the entire selection process with input from local media. Special thanks to Mike Snow and Trent Kling of ESPN 100.7 for input on the selections. Also special thanks to Scott Nuzum (Fort Scott Tribune), Sean Frye (Parsons Sun), Derek Livingston (Derek Livingston Photography) for providing us with info and photos this season.