v Faces in KS: Brandon Gray - Sports in Kansas 
Warning: include(../includes/bodytag.php): failed to open stream: No such file or directory in /home/kansass/public_html/ks/news/index.php on line 36

Brandon Gray of Jayhawk Linn is one of 3A top multiple sport athletes. (courtesy photo) 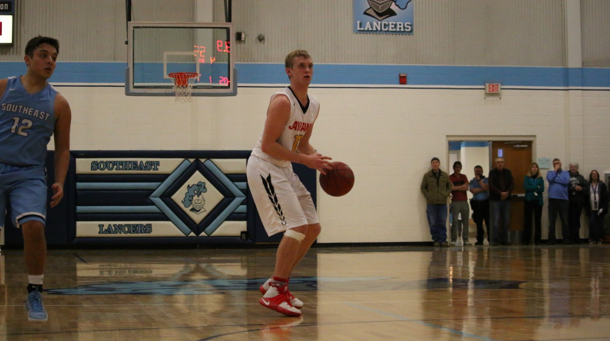 Jayhawk-Linn High School located in Mound City, Kansas is located about around an hour south of Kansas City and a hour north of Pittsburg on the far eastern side of the state. Not only are they called Jayhawk-Linn, their mascot is the Jayhawks, so it's pretty easy to remember. This year they feature one of the better smaller classifications multiple sport athletes in Kansas in senior Brandon Gray.

Gray, an all-state pick in 3A basketball last year from Sports in Kansas, averaged 23 points per game for the Jayhawks. He averaged 19 as a sophomore and another nine points a game as a freshman, giving him over 1,000 points in his career already. In football he was a two-time all 3A pick as a tight end with his 6-foot-4, 195-pound frame. He had over 1,000 yards receiving combined over the last two seasons with 16 total touchdown receptions. Gray was also a first team Southeast Kansas All-Area pick from Craw-Kan as a basketball player last March. It doesn't stop there as he is also a state qualifier in track in the 400 meter dash and 4x100 relays for the Jayhawks last May.

This season Gray and the Jayhawks will look to win their league, mid-season tournaments and ultimately qualify to go to the 3A state tournament in Hutchinson.

Gray could land a scholarship at a lower level basketball program in college, but may be a sleeper for a D2 football program at tight end. He definitely features the athleticism with his size. He has a 53 second 400 meter dash time and a 4.6-4.7 handheld 40 range time. Gray is also a 6'0" high jumper. Not overwhelming track and field numbers by state championship level standards, but do remember he's a tight end in football.

For now its basketball season for Gray who started out his first game of the year with 36 points and 7 rebounds for the Jayhawks. We caught up with him below in the latest edition of Faces in Kansas.

This feature is presented by Harlow Oil Company in Mound City, Kansas, wishing Brandon and the Jayhawks best of luck this season!

When I was little I grew up around them. Most of my family loves Sports; I have been involved with whatever sport happened to be going on since I was in kindergarten, I don’t like having an off-season.

To be the best leader I can possibly be. Do whatever I can to help the team Succeed.

I love it, the past three years I have been lucky enough to play for Coach Spitzenberger. He has helped me be the leader I am today. He pushes me everyday to be the best I can possibly be there’s no doubt without him I wouldn’t be the player I am, I wouldn’t want any other Coach in the State.

Up tempo, free-flowing style of play, Weaknesses would be my jump shot. Strengths are passing, rebounding, and athleticism.

I would like to play at the next level, I’ve got a couple of looks so far.

It’s a small town, which means there’s not a lot to do but the community is very supportive in everything throughout the school and I love it.

I hope to still be involved with sports as coaching or training.