v Sports in Kansas: 2017 Football Coach of the Year Honors - Sports in Kansas 
Warning: include(../includes/bodytag.php): failed to open stream: No such file or directory in /home/kansass/public_html/ks/news/index.php on line 36

Sports in Kansas: 2017 Football Coach of the Year Honors 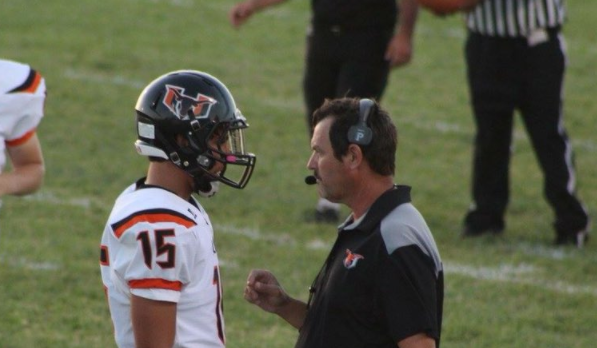 All-Classes Coach of the Year

Miege won its fourth consecutive 4A-I state title and did it with a perfect 13-0 record. The Miege program is as dominant as any program in the state and has turned into a machine. It wouldn’t matter what class the Stags played in they seemed to dominate, beating both the 6A state champion and 5A state runner-up. Over the last four state championship seasons, the Stags are undefeated at home (26-0), have a 50-2 overall record, 10-0 vs 5A competition, and are 12-2 against 6A competition.

Blue Valley North and football didn’t go together not that long ago. That has changed under head coach Andy Sims who led the program to their first ever state title this season in winning the 6A state title over Derby in Emporia. Sims has helped elevate the program over the last three seasons to being a contender in the EKL and 6A. It wasn’t long before that they were struggling to find a single win. Outstanding turnaround to this program.

Trail had big shoes to fill taking over Alan Schuckman who he spent 22 years as an assistant under at Carroll. He filled them well in leading the Golden Eagles to the 2017 5A state title as the underdog entering the title game. Carroll was dominant in knocking off the Saints of St. Thomas Aquinas, 38-28. Trail led BC to a 12-1 record in his first year as the head coach.

King led a De Soto squad to the sub-state championship in 2017 with a loaded cast of players for the first time since 1989. To have a lot coming back is one thing, but to live up to that hype is another and King’s team did that. He led his team to a 10-2 record in 2017 eventually losing to state champion Bishop Miege twice, once in regular season district play and in the 4A-I sub-state championship game. After talking with coaches within the Miege program, De Soto may have been close to being the second-best team that Miege played this year and that included all of the loaded 6A/5A EKL including 6A champ BV North. If Miege isn’t in 4A-I you’re likely looking at a state championship coach. Credit to King and his De Soto staff for an outstanding season.

Teeter has proved to be the perfect fit for the Longhorn program and won his second state title in the last three seasons with his win over Frontenac for the 4A-II crown. The Longhorns finished the season 12-1, their only loss to Scott City, which was later avenged in the playoffs. This may have been the most balanced team in the state with everyone stepping up. Teeter runs a physical program that involves everyone for a total team effort. He now has a 43-7 record after his fourth year for the program after being with Goodland and Hays.

Michael led Sabetha to their first state football title in 20 years with a 7-6 victory over Marysville in the 3A title game. Sabetha defense proved to be the difference maker this year as they had 24 takeaways as a unit. It also proved to be the key as they bended but didn’t break in holding Marysville out of the endzone with a late interception to seal the deal for the 3A state title. Sabetha also kept offenses off the field with their 340 plus rushing yards per game in 2017. Sabetha also took district runner-up and won the state title going through arguably the toughest format of playoffs we have in the state with 32 total teams making it of the 64. The Bluejays finished 12-1.

Sasse had huge shoes to fill when he took over the Roger Barta ran Smith Center program back in 2013. All previous titles in school history had all came under Barta until Sasse led the Redmen to their first crown since 2008 by their domination of Colgan in the 2017 state title game. Smith Center now has nine state football titles, eight came under Barta. The Redmen finished 12-1 in 2017.

Baar led Hoxie to their first state title since 1981 with a 54-14 victory over St. Paul in the 8M-I title game in Newton. Hoxie finished with a 12-1 record this season and used a dominating defense and explosive offense to stay atop of 8M-I.

Heuer has done outstanding as the head man at Hanover in 13 years with four state titles and a 127-25 record. The Wildcats captured the 8M-II title for the second consecutive season, winning the title 54-48 over Hodgeman County. Hanover finished a perfect 13-0, only one of two teams to do so in 2017 (Hanover 8M-II, Miege 4A-I)