v Schwarz, Albertini, Lee pick up top honors in 8M-I - Sports in Kansas 
Warning: include(../includes/bodytag.php): failed to open stream: No such file or directory in /home/kansass/public_html/ks/news/index.php on line 36 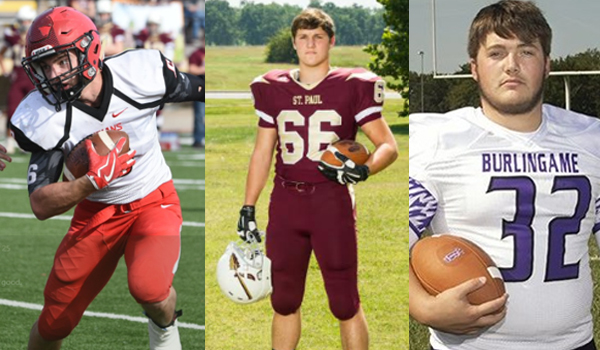 8M-I Offensive Player of the Year

Schwarz helped Hoxie to their first state football title since 1981 as he had 1,718 rushing yards with 37 total touchdowns over his senior year. On defense, he registered 77 tackles, blocked two punts, and had two fumble recoveries. In the 54-14 win over St. Paul in the 2017 8M-I title game he went for 204 yards on 33 carries with four scores in the game. Hoxie finished the season 12-1 under head coach Lance Baar.

The Hoxie Indians Football Team and Hoxie High School would like to wish Latham Schwarz congrats on being named the 8M-I Offensive Player of the Year from Sports in Kansas.

8M-I Co-Defensive Player of the Year

We only have had three co-player of the year selections in all of the classifications in the six seasons we’ve been doing this but both Albertini and Lee were so valuable to their teams you couldn’t leave one off and have one on. Albertini was a three time all league and all-district offensive and defensive lineman. He was also a two-time first team all-state selection in 8M-I. The 6’2” 225-pounder helped lead the Indians to their first state championship appearance in 15 years. The Indians, led by head coach Keith Wiatrak, finished 11-2 in 2017. Albertini has several NAIA offers and is seeing Division II interest. Wiatrak describes Albertini as one of the best football players that he has coached and says he's a self-made player by his work ethic.

The St. Paul Indians Football Team would like to congratulate Anthony Albertini on being named the 8M-I Defensive Player of the Year in Kansas.

Lee, just like Albertini above, was so valuable to his team over the last several seasons. The 6’0” 240-pound defensive end had 141 tackles this season, 21 of which went for loss with 8.5 sacks. He also had 55 quarterback hurries. He is a two-time All 8M-I pick for head coach Jeff Slater and was part of a program that went to three straight state semifinals. Lee was also a multiple time unanimous pick on the Lyon County League Offensive and Defensive lines. Lee also gets it done in the classroom as a Kansas Honors Scholar with a perfect 4.0 GPA. Lee could project as a fullback, center or defensive lineman at the next level.