v Blumer, Strahm take home top 3A honors - Sports in Kansas 
Warning: include(../includes/bodytag.php): failed to open stream: No such file or directory in /home/kansass/public_html/ks/news/index.php on line 36 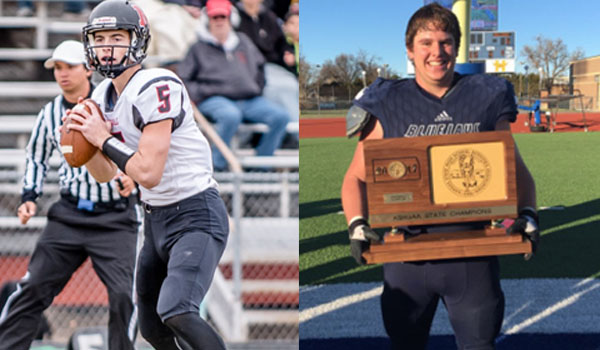 3A Offensive Player of the Year

Marysville had an incredible season coming out of nowhere to take 3A runner-up honors in 2017. The main reason for that was the quarterback play of senior Jack Blumer. Blumer played like one of the best players in the state this year, regardless of what classification. The 6-foot-2 senior passed for 3,165 yards with 31 touchdowns in 2017. His most impressive stat was his completion percentage of 70 percent. And it didn’t stop with his arm as he racked up 994 yards and 14 touchdowns on the ground. Blumer had two targets that became his favorite in Gabe Pieschl (1,269 yards, 14 TDs) and Jacob Backus (926 yards, 7 TDs). Just three seaons ago the Bulldogs were on a 32-game losing streak go going 12-2 and the 3A state runner-up in 2017, losing state by just one point, 7-6. Blumer was also a second elite 11 selections by the states two major newspapers.

Bulldog Boosters is proud of Player of the Year nominees Jack Blumer and Gabe Pieschl. We are excited to congratulate Jack, on being selected as Sports in Kansas 3A Player of the Year. Congratulations on a fantastic season! Go Dogs!

3A Defensive Player of the Year

Strahm, a 6-foot-2, 265-pound, junior, was the top two-way lineman in 3A this season and controlled the line of scrimmage on both sides of the football picking up first team all-league Big 7 on offensive and defensive line. He was also a first team all-3A pick by the major newspapers in the state. Strahm had 64 tackles, 4.5 sacks, a punt block and three forced fumbles. A nose guard isn’t known to usually pick up a lot of tackles, their job is to plug holes but Strahm does both and he’s already registered 153 tackles over his career with a season left to play. He was instrumental and getting pressure on the quarterback this season to let a defensive unit pick up 24 interceptions as a group, which ranked second in Kansas this season only behind the 25 by Phillipsburg. On offense he helped paved the way for a unit that averaged 335 rushing yards per game. Strahm is very strong for a junior in high school with a 500 squat and a bench of 300 pounds.

The entire Sabetha community is proud of our Bluejay Football Team and Elliott Strahm on being named the 2017 3A Player of the Year from Sports in Kansas. It is an honor for Community National Bank to help sponsor such a fine young man and very gifted athlete. Congratulations Griz!!

3A Offensive Player of the Year Finalists

3A Defensive Player of the Year Finalists