v Gilbert, Ginavan pick up 4A-II Player of the Year Honors - Sports in Kansas 
Warning: include(../includes/bodytag.php): failed to open stream: No such file or directory in /home/kansass/public_html/ks/news/index.php on line 36

Gilbert, Ginavan pick up 4A-II Player of the Year Honors 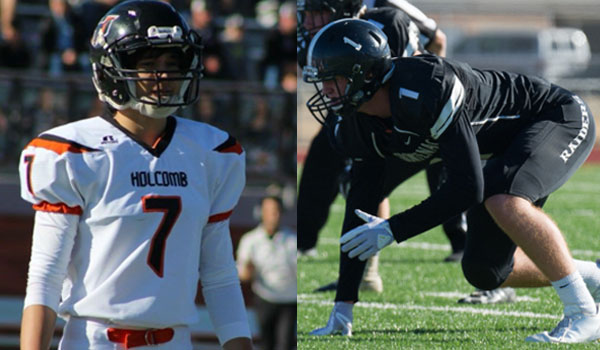 4A-II Offensive Player of the Year

Gilbert led the Longhorns to the 2017 4A-II title with a dominating performance in the state title game with 264 yards passing (4 TD) and another rushing score. The 6-foot-2, 170-pound, senior, quarterback, threw for 2,293 yards this season with 28 touchdowns to just seven interceptions. He also added 484 more on the ground with six scores. Gilbert was the signal caller of perhaps the most balanced offense in Kansas that averaged 170 yards rushing and 176 yards passing per game. In his career as a two-year starter at quarterback, he threw for 4,253 yards with 53 touchdowns to just 15 interceptions over 25 career games. The Longhorns were 43-7 while he was in high school since Kent Teeter arrived. Gilbert was also a second team Sports in Kansas 4A-II basketball player last season for the defending 4A-II champion Longhorns.

The Good Sport in Garden City would like to say congratulations to Trey Gilbert of Holcomb on 4A-II Player of the Year from Sports in Kansas. The Good Sport is a proud supporter of the Holcomb Longhorns.

Congratulations to Trey Gilbert on an oustanding senior season from Chappel's in Garden City.

4A-II Defensive Player of the Year

Ginavan, a 6-foot-4, 220-pound, senior, defensive end, was one of the best two-way players in the state this season. Despite double teams Ginavan had a monster year defensively with 57 tackles, 9.5 tackles for loss, eight sacks, two force fumbles, three fumble recoveries and an INT. For his career he had 20.5 sacks, 168 tackles, six forced fumbles, and a blocked field goal. Ginavan’s pressure was instrumental in the takeaway game for the Raiders as they produced 17 interceptions as a unit, including huge ones in the 2017 state playoffs. He produced just as much on offense with 614 yards receiving on 39 catches with nine touchdowns. Ginavan is a rising recruit in the state and holds an FBS offer from Wyoming. He also became his schools first top 11 (all-state all-classes) selection since 1965. He joins his dad Steve on the very elite Top 11 in Kansas, an all-conference player at Pitt State in 1989, who was a standout at Emporia High School in the 1980s. Ginvavan was the only Top 11 all classifications selection in the 4A-II division this year and was a first team Non-Senior pick from Sports in Kansas in all-classes last year.

The Frontenac Quarterback Club congratulates Broc Ginavan and the Raider football team for an incredible season. Thank you so much for a year to remember!