v Faces in KS: Karsen Schultz - Sports in Kansas 
Warning: include(../includes/bodytag.php): failed to open stream: No such file or directory in /home/kansass/public_html/ks/news/index.php on line 36

Karsen Schultz is one of the best players in KS for Wabaunsee. (Photo: Tracy Capoun) 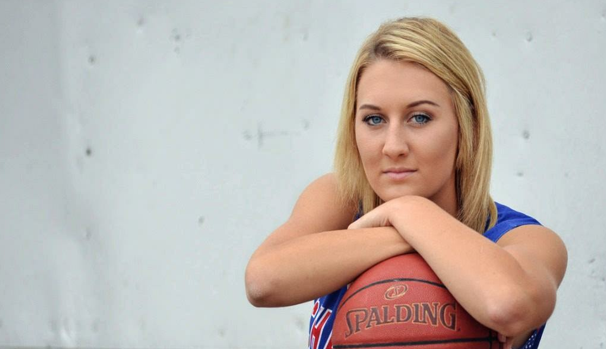 Wabaunsee junior Karsen Schultz was one of the best players in Kansas last season and will look to continue that this season after leading the Chargers to a 2A state runner-up finish last March.

The 5-foot-10 senior guard averaged 19.4 points per game last season on her way to earning 2A Sports in Kansas first team all-state honors. She was also a second team pick back in 2016 as a sophomore. Schultz is very versatlile scoring inside and outside. Something that D2 power Emporia State really liked and where Schultz signed earlier this fall. But it's not just her scoring ability that makes her a valued player, she brings relentless defense every night.

"I can score inside and outside but I am unslefish. One of my weanesses is that I don't shoot the ball as much as I should. The one thing that I can always bring is defense." Schultz. said.

Schultz isn't just a basketball player either. She has been a multiple-time all-state hurdler in the 100 hurdles and 300 hurdles over the last three track and field seasons, her highest finished being a state runner up finish in the 100 hurdles as a sophomore in 2016 in 2A.

Wabaunsee is currently ranked #1 in the preseason KBCA poll released last week and returns some players including Maddy Hutley, Abby Oliver and Autum Schreiner off a squad that finished 23-3 in 2016-2017. 2A state power Central Plains, the 4x defending 2A state champion who knocked the Chargers off by 12 at state last year (60-48), is ranked #2 in the state to begin the year.Schultz had a game-high 21 points in the title game.

"We have a young team this year but we have some key players returning. They all have had experience and will play major roles on our team this year." Schultz said.

It's a long season but Schultz goals are to get her team back to the 2A state tournament in nearby Manhattan in March.

"Our goals are the same this year as they always are. It's to come out tough and compete. If we do that this year and do all the little things right, hopefully we have a chance to end up back at the state tournament." Schultz. said.

We caught up with the outstanding senior playmaker below in the latest edition of Faces in Kansas.

This feature is presented by Wheat State Elite Basketball - Dylan & Chelsea Evans - wishing Karsen and the Wabaunsee Chargers best of luck this season!

Our goals this year are the same as always and that is to play tough and compete every game and do all the little things right and hopefully end up where we want to be and that is at the State Tournament again.

Playing for Coach Perine and Coach Schultz (my dad) has been difficult at times but worth it, they both expect me to be the leader and work hard at everything. Coach Perine expects me to come out on game night ready to play the best that I can and compete. Playing for my dad in high school has been a great journey. Ever since I was little he has coached me and as I am going into my senior season, he is the one I give most of the credit to for me being the player I am today.

I’d say that I am a pretty versatile player. I work hard in the off season and do the little things that my team needs from me. My strengths are that I can score outside and inside and I am unselfish.  My weaknesses are that I don’t shoot the ball as much as I should and my defense is not solid all the time.

I signed with Emporia State to play basketball.

We have a young team this year but some key players returning are Abby Oliver, Maddy Hutley and Autumn Schreiner. They all have had experience and  play major roles on our team this year.

During my Summer basketball experiences I have played against some of the toughest competition around. I am fortunate to play in one of the toughest leagues, the Mid East League and will face many talented players from those schools again this season.

I come from a town where the community is very supportive. Everyone knows each other so it’s pretty nice coming from a small town where people know who you are, care about you and want to see you succeed.

Married with a family, living in a rural area. I am undecided on a career right now, but I am considering going into the health field or being a strength/personal trainer.

Definitely The Longbranch in Paxico. It’s owned by local people who work hard and their food and service is always good!