v Faces in KS: Sydnee Crain - Sports in Kansas 
Warning: include(../includes/bodytag.php): failed to open stream: No such file or directory in /home/kansass/public_html/ks/news/index.php on line 36

Sydnee Crain is one of the top 4A-II players in Kansas. (submitted photo) 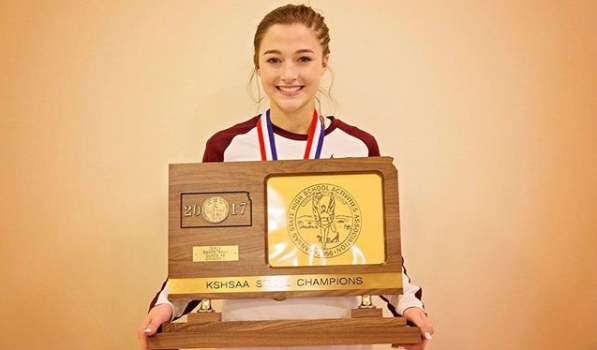 It’s non-stop of playing sports year-round for Girard senior athlete Sydnee Crain. But the senior multi-sport all-state athlete wouldn’t have it any other way.

When its volleyball, she’s all in and she’s been an all-league selection since her sophomore year as a four-year varsity player. When it’s basketball season, she’s one of the best in 4A-II Kansas. She has been a starter since her freshman year at point guard and has earned first team 4A-II all-state honors in each of the last two seasons with her senior season remaining. In softball, she has been a first team all-league selection since her freshman year and earned first team all-state honors in 4A-II as a junior last fall. In the summer, she plays AAU basketball on the Wheat State Elite. When it comes to multiple sport athletes in the state in 4A-II there are perhaps none better than Crain.

“Every year and every sport, I set goals for my team and myself. I grew up being around my brother and sister who were multiple sport athletes, so it became natural for me to play them all.” Crain said.

She plays them all well, very well, and it was a huge reason for Girard landing their first ever state title in school history last year in 4A-II basketball, going 24-1. Crain scored 13 points in the state championship game over Jefferson West to win 54-48, including a perfect 8-of-8 from the free throw line to come in clutch. To make things even better, Crain helped lead the softball team to a state title just two months later. The school never had any team state titles to having two in two months. Pretty crazy, right?

“It was a dream come true. Getting the chance to share those moments with teammates, that I consider family, is definitely something we will never forget for the rest of our lives.” Crain said.

For now, its basketball season, perhaps her best sport, one could argue and say it could easily be softball as well. Girard, led by head coach Brad Herlocker, lost all-state players Ashley Ray (Kansas State) and Calea Augustin (Neosho County), so this year they will have to rely heavily on their senior guard in Crain. Crain signed to play at Division II power Pittsburg State University on Thursday for head coach Lane Lord. The Gorillas have been to the Elite Eight twice since 2012. The last two point guards that signed with the Gorillas out of Girard worked out well in Amanda Davied, now an assistant at PSU, in the early 2000’s and the recently graduated Hadyn Herlocker, one of the best in Division II the last few seasons. Pitt State had quite the local class also landing three-time all-state player in all-classes in Tristan Gegg of Labette County, one of the best combo-guards Kansas has to offer that is a flat out scorer.

“I grew up going to coach Lord's camps and watching the Gorillas play. I always wanted to play for him. It also helps that my family will be very close to come see me play.” Crain said.

It may be a heavy task in having the girl’s basketball team repeat in 2018 with all the key talent they lost from 2017, but the softball team returns just about everyone from its 2017 4A-II title team under head coach Jim Vinze. In addition to Crain, they return pitchers Shelby Smith, who signed with Pittsburg State earlier this week, and Shay Grostephan, one of the better 4A-II players in Kansas. Jacey Murphy, one of the best softball players in 4A-II, also returns on the infield for the Trojans.

“My teammates and I don’t expect anything. We know a repeat state title is going to be a hard-fought battle. We all love to compete. I get the luxury to share the field with some of the hardest working athletes around. We all believe in each other.” Crain said.

Girard girl’s athletics is going through something special right now with the 13 individual state titles by the recently graduated Cailie Logue from 2013-2017 in track/cross country, now doing big things as a freshman at Iowa State, and the two-state titles by softball and basketball for the first team titles in school history in 2017. We look for Crain to help continue that tradition into this winter and spring for the Lady Trojans. We caught up with her below in the latest edition of Faces in Kansas.

I grew up following my brother and sister around. My brother being a three-sport athlete and my sister playing four…If they were busy, so was I. They never left me behind, but now they joke about how annoying I used to be. They have had a huge hand in making me the athlete I have become today.

How awesome was it to win state in two sports last year, talk about that?

Getting to be a part of both championship games/teams was above and beyond a memorable moment, it was a dream come true! Plus, getting the chance to share those moments with teammates that are more like family…definitely a feeling that all of us will hold very near and dear to our hearts for the rest of our lives.

How was volleyball this year?

This year was the first time for most of the girls to play varsity, including the team getting a new head coach. Coach Morgan Crawford, is a great coach and mentor. She brought us a long way, and the team improved 110% from the beginning of the year. We just fell a little short at sub-state; losing to Burlington in the Championship.

What are the expectations in basketball this year after losing a solid cast of players?

I believe in my coaches, teammates and myself, knowing that no matter what obstacle is in front of us... we will never shy away and we’ll leave everything we got on the floor.

What are the expectations in softball when you basically return everyone?

I don’t think my teammates and I, expect anything. We all know that a “Repeat” state title is going to be hard fought battle. But, the group of girls I get the luxury of sharing the field with, are some of the most hard working and dedicated athletes in SEK. We love to compete, we believe in each other and we are all hungry for the same thing. A back-to-back state championship!

What type of player and teammate are you?

Every year and with every sport, I set goals for the team and myself. I believe that helps me stay focused and hungry. What I do in the off season and what I do extra during the season molds me as a player. A trait my parents instilled in me since the first time I picked up a ball.

Best thing about playing for Girard?

EVERYTHING! There are several “best things” about being at Girard. Being able to call my teammates and coaches, family, probably means the most. The administration, and community have always been huge supporters to all of the GHS athletes and students. I will forever be grateful to each and all.

What’s it like to play for your basketball coaches?

Coach Herlocker, Coach Crain (aka MOM) and Coach Ripper make it very easy for me to do my job. They’ve helped me with my leadership skills, the discipline I need to have on the court and push me to be the best version of myself every day. Also, I am blessed to call one of the coaches my mom, having the opportunity to have her coach me since the 1st grade... all I can say is that I’m very fortunate having her by my side all these years.

You chose basketball and Pitt State, what led you to that?

Growing up going to Coach Lord’s camps, and watching them play. It was always my dream to play for him. Plus, it’s an added bonus having my family close enough to be able to come and watch me. I wouldn’t be the player I am today if I hadn’t had all of their love and support in the stands.

You play AAU over the summer, talk about that, does that really help in the player that you’ve become?

This last summer, I got the opportunity to play for an organization out of Emporia, KS…team name: DWE’s Wheat State Elite. The owners, Dylan and Chelsea Evans, believed in me enough to bring me into their WSE family, and for that I feel truly blessed. The coaching staff was fabulous and Dylan was extremely dedicated to each and every one of us. 110% must check out! I would definitely say that playing AAU ball is a good thing for any athlete wanting to go to the next level. For me, I was able to see the areas of my game that I needed to focus on moving forward. The competition level, game speed and physical play that I competed against, was everything I needed to make my myself a more valuable player. Honestly, what I feel shaped me the most, are my fundamental skills. Many times, my dribbling, guard moves and defense have saved me or given me that slight edge to overcome an opponent. Big “Thank you” to my mom and Scott Schulte, director of the Skywalkers organization out of Joplin, MO, for the countless hours of one-on-one practices.

I guess, I would say I have a few…but mainly because of the teachers. Math with Christen Jackson, English with Robyn O’Malley, FACTS with Emily Herlocker and PE with Sunny Pierce.

What type of student are you?

I look at academics the same way I look athletics. I work hard and take pride in maintaining a high-grade point average. I understand that at some point in my future, athletics will become secondary, and being a good provider for my family, will be my top priority.

Hopefully I will be settling down in a big city, with the job of my dreams.

Best place to get in Girard?

OPIES, is the place to go. The customer service is wonderful, and the owner is one of the friendliest people in town. The “Chicken Bacon Ranch Pizza” would definitely be my top recommendation!! It’s the best!

I absolutely love being in the water. Since I was two years old, my family has vacationed every summer at Big Cedar on Table Rock Lake. By the age of four, I had learned how to swim. The summer before my sixth birthday, I learned how to water ski and knee board. I don’t care if it’s long rides in the boat, canoeing, playing around on the jet skis, wake boarding or jumping off the cliffs by the resort…I LOVE IT ALL!!